1874 bridge to be moved to Beaverfork Lake 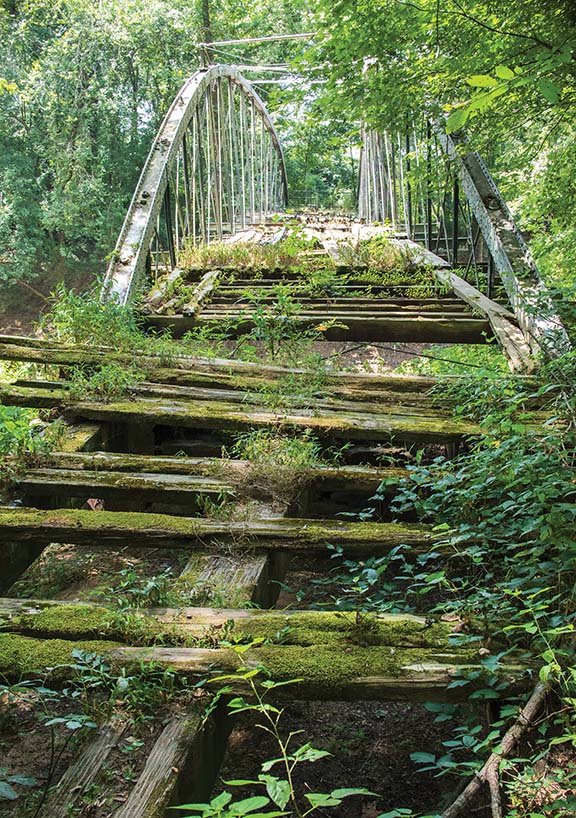 The Springfield-Des Arc Bridge, believed to be the oldest bridge in Arkansas, will be relocated from northwest of Wooster to Beaverfork Lake in Conway after the bridge is restored this summer by a nonprofit group from Iowa. The Conway City Council entered an agreement last week to provide $60,000 of a $300,000 grant from Metroplan for the project. Faulkner County will provide in-kind services.

CONWAY — The newest attraction coming to Beaverfork Lake in Conway is 142 years old.

The 1874 Springfield-Des Arc Bridge, said to be the oldest bridge in Arkansas, will be moved to Conway and placed at Beaverfork Lake, said Jack Bell, the city’s chief of staff.

The Conway City Council last week accepted a $300,000 Metroplan 80-20 matching grant and entered an agreement to pay $60,000 toward the project. The iron bowstring truss bridge, which spans 146 feet, will be moved from its isolated location northwest of Wooster in Faulkner County to Conway. The bridge spans Cadron Creek between Faulkner and Conway counties.

Bell said part of the reason Metroplan approved the grant is the bridge’s potential for pedestrian and bicycle use.

Mayor Tab Townsell and Bell both used the word “iconic” to describe the bridge.

“From the highway, you will have to look through the bowstring bridge to see the lake,” Townsell told council members. “That will be beautiful anytime, especially at sunset.” He said he can envision many prom and wedding pictures being taken at the site.

“The concern is the bridge may not stand up much longer,” Bell said.

Kenneth Barnes, who teaches history at the University of Central Arkansas, said last week that the bridge is the oldest of its type in the United States, “so it’s historically significant beyond Arkansas.”

Barnes is a member of the Faulkner County Historical Society, which has worked to save the bridge. He said the bridge went out of service in 1991 when the road was relocated and has been deteriorating

He said people have had parties on the bridge, and at least two fires have been started on its deck, damaging the wood and the trusses.

At first, the plan was to move the bridge to a portion of the Tucker Creek biking/walking trail system in Conway, but he said he likes the plan to place the bridge at Beaverfork Lake.

“Originally, I wasn’t so keen on that [location] because I thought [the bridge] wouldn’t be as visible in the community, but the more I’ve gotten used to the idea, I think it’s the best, because I think it will be really scenic,” Barnes said.

He said an additional advantage is that the lake is closer to the bridge’s original site, so residents of Faulkner County who have lived near the bridge and have fond memories of it will see the bridge as they drive into Conway.

The third advantage of the Beaverfork Lake location, he said, is that the bridge won’t have to be moved through the city streets of Conway.

group in Iowa devoted to restoring and preserving bridges, will assist with the move, Barnes said. Julie Bowers, a representative for the group, will come to Conway June 7 to talk to city and county leaders about the logistics of the project.

A crane company in Conway and the International Association of Bridge, Structural, Ornamental and Reinforcing Iron Workers in Little Rock have volunteered to help, too, Bell said. It is a joint venture with Faulkner County, which will provide in-kind services, he said. “They’ve got equipment we don’t have.”

Bell told council members that the Iowa group plans to “rehab” the bridge.

“It needs lots of work,” he said. “Parts are missing, and it needs painting.”

Bowers is the contractor for work on the bridges.

“Here’s the deal — that bridge needs some repairs; it needs some engineering,” she said. “We don’t think we’ll be moving it in one piece.”

She said her group believes the bridge has lead paint, so the restoration will include blasting work.

Bowers said the group has master craftsmen who painstakingly restore bridges, disassembling and reassembling them to make sure each rivet and piece is perfect.

“When we are done with these bridges, they are as new,” she said.

“We are so excited to get to come to Arkansas and get to restore this bridge and move it to where people can see it and appreciate it,” she said. “There aren’t many left in America. It’s the oldest, longest King bridge of that type in the United States. In Arkansas, it is an important bridge.”

Bowers said former Faulkner County Judge Preston Scroggin contacted her five years ago about saving the bridge, and she came to see it. However, a tornado hit Faulkner County shortly thereafter. The next county judge, Alan Dodson, also contacted Bowers, but then there was the Exxon oil spill in Mayflower and another tornado in the county. Then Barnes picked up the cause.

Scroggin said he is “tickled to death” that the bridge is going to be saved.

“I think it’s a wonderful thing,” Scroggin said. “That bridge is part of our Arkansas history, and a lot of people don’t realize it. Back in the day, the Arkansas River wasn’t navigable. It was a dry stream most of the time, and the White River was fed by all those mountain springs, … so they could get steamboats up to Des Arc, and Des Arc was a huge hub, and Springfield, Arkansas, was a huge hub. This is the original bridge.”

He pointed out that the bridge was completed just nine years after the Civil War ended.

“Building an iron bridge in the 1870s was a big deal,” Scroggin said.

Barnes said the project to move and restore the bridge could get underway in late summer, and Bell said “that is very realistic.”

“We are working with the landowners adjacent to the bridge to get access,” Barnes said, “and so far, that’s

Barnes said one nearby property owner didn’t want the bridge moved, but it needs attention.

“It’s not really reasonable to think it can be protected from vandalism and other issues unless it moves to town and has police protection and lighting,” Barnes said.

Conway City Council member David Grimes said he is glad the bridge is being relocated.

“I think it’s a great chance to save something that’s irreplaceable,” he said.