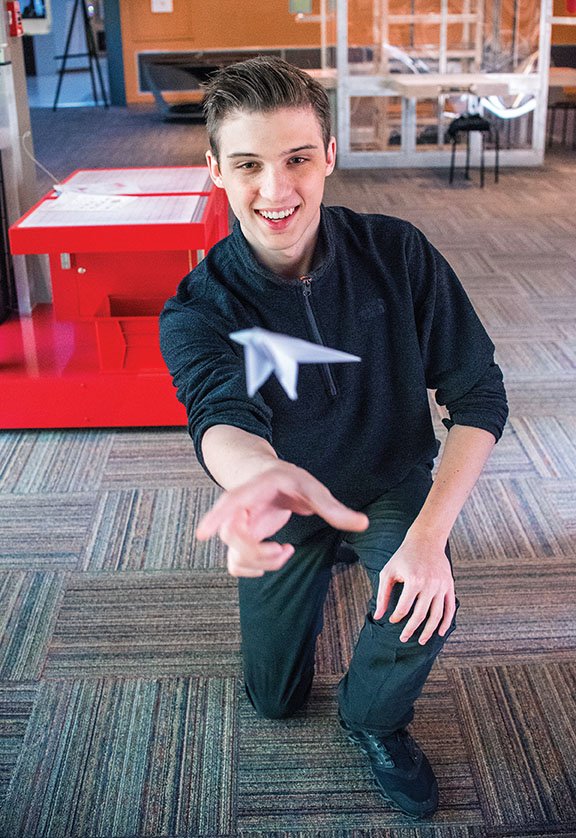 Kye Masino, founder of KYE-YAC International, flies a paper airplane that is part of the Imaginate exhibit at the Mid-America Science Museum in Hot Springs. KYE-YAC is the presenting sponsor of the special exhibit.

One Hot Springs teen hasn’t even graduated from high school yet and is already making a global impact. Kye Masino’s list of involvements could leave anyone in wonderment. He most recently attended the United Nations General Assembly in September as a member of the Jane Goodall’s Roots & Shoots National Youth Leadership Council, where he was among heads of state and celebrities, from Stevie Wonder to Leonardo DiCaprio.

The youth council is part of the Jane Goodall Institute and is dedicated to cultivating change in communities and building a brighter future for people, animals and the environment.

“As a member of Jane Goodall’s National Youth Leadership Council, I and my fellow council members are invited to attend various events in the U.S. and around the world throughout the year,” Masino said, “events that— were we not on the council — we would never have an opportunity to participate in otherwise.”

Masino, who is home-schooled, began his civic involvement at an early age and was already on a philanthropic journey when he met Goodall. Her message of implementing positive change through youth and taking compassionate action for a better future are things that resonated with Masino. He puts those principles in action through his nonprofit, KYE-YAC International.

In 2009, Masino established KYE-YAC after the death of his grandmother, Nancy J. Masino. Her “boundless heart, soaring spirit and unconditional support” of her grandson made an impression on him, the organization’s website states, and he wanted to continue her legacy of giving.

Since its inception, KYE-YAC has contributed about $500,000 to benefit youth in Arkansas and beyond. Masino and his board of directors, which comprises fellow youth, devote their time and resources to initiatives that improve the lives of children, from literacy programs to cultural-awareness initiatives and more.

Masino has spent time in Japan through Hot Springs’ Sister City Program, which set him on a path for more travel and global philanthropic work, he said. Through a literacy program at the Garland County Library in Hot Springs, children learned the value of another culture and had the opportunity to visit with Japanese exchange students.

“They learned international borders are the only boundaries, and children are the same all over the world, despite circumstances and cultural differences,” he said.

At the U.N. event, Masino said, it was humbling to witness notables and celebrities carry themselves with such humility.

“All of the dignitaries carried themselves with a surprising amount of humility, so the experience seemed somewhat natural,” he said.

Masino had the opportunity to participate in the United Nations International Day of Peace ceremony with Nobel Peace Prize Laureates and U.N. Messengers of Peace, including Stevie Wonder, Goodall, Leonardo DiCaprio and Michael Douglas. Each year, a giant peace dove is flown through the air like a kite in the

“I helped fly the peace dove as Secretary-General Ban Ki-moon rang a special bell in the garden,” Masino said. “We then gathered in the U.N.’s General Assembly Hall, where the secretary-general announced the day’s theme for 2016 would be ‘The Sustainable Development Goals: Building Blocks for Peace.’”

United Nations. This agenda calls on countries to begin efforts to achieve these goals over the next 15 years,

“It aims to end poverty, protect the planet and ensure prosperity for all,” he said.

Masino said he gained many insights from his U.N. experience. The KYE-YAC board is also a Jane Goodall Roots & Shoots group, he said, adding that the organization has already been implementing many of the building blocks in the community and throughout the state.

“For example, hunger is a main building block, and KYE-YAC has carried out a substantial amount of work with the Rice Depot and the Eleanor Klugh Jackson House [for Crisis Intervention in Hot Springs],” Masino said. “Building block No. 4 represents education. For years, we have partnered with the local YMCA on tutoring and mentoring programs with youth.”

And over the next several months, KYE-YAC will be sponsoring Imaginate at the Mid-America Science Museum in Hot Springs.

“We’re incredibly excited to be hosting Imaginate this fall and to have KYE-YAC as its presenting sponsor,” said Jim Miller, director

of marketing for the museum. “Imaginate really complements the Mid-America Science Museum’s existing exhibits that are on permanent display and allows visitors to have a really rich hands-on science

Imaginate will be on display at the museum through March. It was designed by the Ontario Science Centre and purchased by the Arkansas

“As a network partner, the Mid-America Science Museum was lucky enough to acquire the exhibit for the fall traveling-exhibition

Masino said KYE-YAC members will volunteer at the museum each month.

“We love it because we all grew up going to the museum and realize how it provides a wonderful learning platform for kids,” he said.

“This interactive exhibit is designed for children and focuses on encouraging their imagination while offering endless possibilities,” Masino said. “That falls in line with both KYE-YAC’s and our Jane Goodall’s Roots & Shoots group’s missions. We strive to empower youth through

education of any kind.”