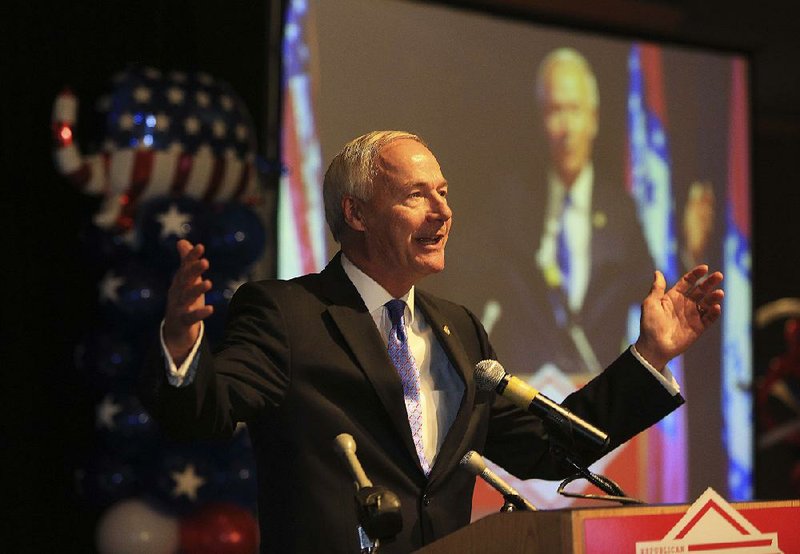 Hutchinson described Arkansas' budget proposal process as one of the best in the nation, saying it acts as a “safeguard against overspending even in uncertain economic times.”

The governor, who is required by law to present a balanced plan each biennium, said “it does not take a Ph.D. in economics to know that we can't say yes to every spending need,” adding that compromises must be made to prioritize the most pressing state needs.

Hutchinson said his plan incorporates savings Arkansas has already reaped partly due to the state hiring freeze and a consolidation of five state agencies. Executive actions, supported by the legislature, have eliminated more than 1,000 government positions, the governor said.

Hutchinson also said savings will come from future streamlining such as moving War Memorial Stadium under the wing of the Department of Parks and Tourism. The Department of Human Services will also see $50 million in savings under his administration's proposed plan, Hutchinson said.

Hutchinson suggested a $10 million increase to higher education for the second year of the biennium, saying his plan “rewards institutions for student success and not just student enrollment.” He also allocated $3 million to pre-kindergarten to improve the quality of classroom instruction and attract qualified teachers.

The state foster care system is a compelling problem needing help as the number of children in the program grows year after year, Hutchinson said. He proposed increasing funding to the Division of Child and Family Services by $26.7 million in the 2018 fiscal year and $11.9 million in the 2019 fiscal year, saying “we cannot shortchange the children or our state responsibilities.”

“I challenge DHS also to use these resources not only to address the need, but reverse the trend,” Hutchinson said, calling the problem “a crisis in Arkansas.”

The governor also said $1 million should be restored for both libraries and senior citizen centers after those amounts were previously reduced.

As for taxes, Hutchinson said his plan reflects a “necessary and cautious and conservative approach.” He suggested a $50 million cut beginning in the second year, which would have a minimal $25 million impact by the 2019 fiscal year.

Through the cut, Hutchinson said he will “continue to focus on the reducing the income tax burden on Arkansans and grow our economy.”

After outlining his proposal, Hutchinson informed lawmakers there is no money in his budget set aside for legislative or executive General Improvement Funds.

The governor highlighted the state issues that would be seeing funding increases under his plan, such as foster care and public safety, and said “there is just simply no money [for the GIF funds] when you need those priorities.”

“This budget meets the needs of our state, maximizes our opportunity for economic growth and continues to emphasize efficiency, reforms and savings,” he added.