Big plans for a tiny home 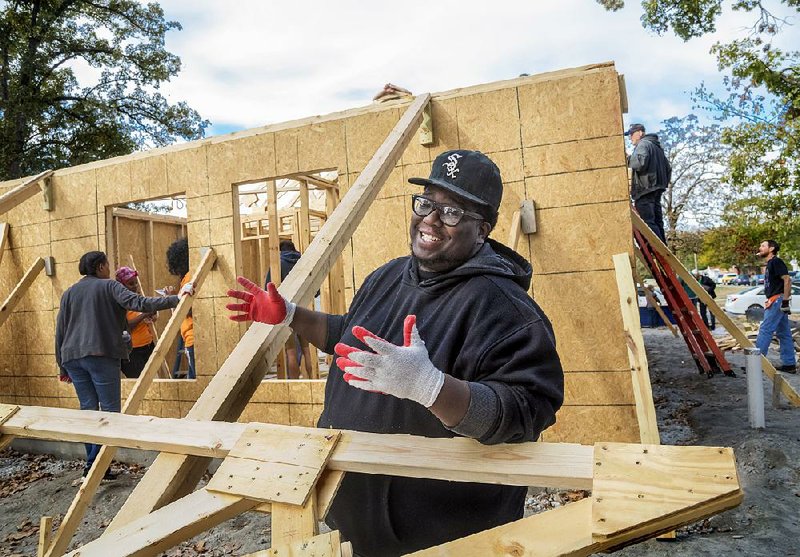 Homeowner Raymond Donaldson takes a quick break while helping build his new “tiny” home in North Little Rock’s Baring Cross neighborhood. Like all Habitat for Humanity homeowners, Donaldson is putting in sweat equity. As Linda Smith, director of U.S. Green Building Council’s Arkansas chapter, told him, “You will have a house that you have laid your hands on every bit of it.”

Tiny houses are huge. Wee little structures take up space on home-centric channels as viewers marvel at how much can fit into a home the size of some people's walk-in closets. 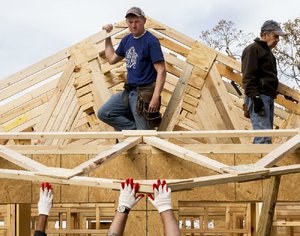 Photo by John Sykes Jr.
John James (left) and Tom Hamlin with Habitat for Humanity wait for a truss to be pushed up while working on the organization’s new tiny house project. 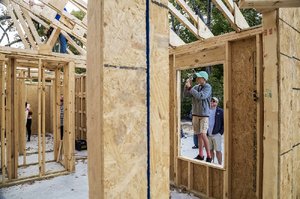 Photo by John Sykes Jr.
Volunteer Miller Wallace, 13, and his father, Bentley Wallace, work on Habitat for Humanity’s latest project: a small house in North Little Rock. The house is a collaborative effort between multiple agencies, and Habitat CEO Bill Plunkett says, “When you all pull in the same direction, it makes things a lot easier.” 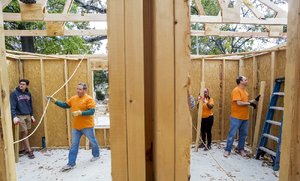 Photo by John Sykes Jr.
Volunteers from Delta Dental work hard in building Habitat for Humanity of Central Arkansas’ first “tiny” house. The home, in North Little Rock’s Baring Cross neighborhood, will be 700 square feet and will be fi tted with energy-efficient appliances. 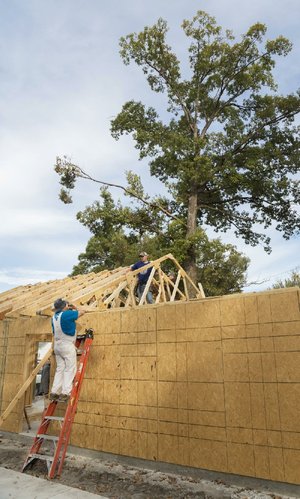 Photo by John Sykes Jr.
Habitat for Humanity of Central Arkansas and the U.S. Green Building Council are collaborating on this new home, about half the size of the usual Habitat house.

Now, for the first time, Habitat for Humanity of Central Arkansas is thinking small. Very small. But not quite tiny.

They've teamed up with the U.S. Green Building Council to build a 700-square-foot house -- about half the size of a typical Habitat home -- in North Little Rock's Baring Cross neighborhood.

"So we're calling this a small house. But I think the term is pretty loosely used. It would seem tiny to me."

It doesn't seem so tiny to the homeowner, Raymond Donaldson. For him, it's a new start. A leg up. A sign of hope and renewal that will be "a lighthouse for the neighborhood."

Volunteers and workers with Habitat for Humanity see the puzzle pieces come together all the time: homeowners, volunteers and Habitat.

Habitat for Humanity of Central Arkansas CEO Bill Plunkett says, "We have a saying around here: 'God shows up all the time around here and it's fun when He does.' I think this is just another example of that."

The small house project started with a "Shark Tank-type competition" at the USGBC. Smith presented an idea for building a tiny house in a low-income central Arkansas neighborhood as a way of demonstrating that "green" building practices, including features such as solar panels, Energy Star-rated appliances and high-grade insulation, could work well in an affordable housing situation.

Her idea received funding but she says she did have a problem: "I needed to find a partner for that who could actually get it done because we don't go build houses."

So she found an ally who does: Habitat for Humanity.

Habitat's armies of volunteers build homes for people in need. Those homeowners take part in building the home, building up "sweat equity," and then Habitat provides them with a no-interest mortgage.

FROM ReSTORES TO A RESTART

Plunkett points out that Habitat was already a "green" organization in some ways, thanks in large part to its ReStores. Those stores and donation centers take furniture, decorative items, appliances, even cabinets and counters, and sells them. The two stores in central Arkansas (6700 S. University Ave., Little Rock, and in the Pike Plaza Shopping Center, 2657 Pike Ave., North Little Rock) pay all the overhead for Habitat of Central Arkansas. And they also keep about 1,800 tons out of landfills every year and provide discounted items that people can reuse.

A small, energy-efficient house, which could conceivably be built more quickly on a smaller lot than an average-size home, fits in well with the Habitat mission of providing low-cost housing. And it also matches perfectly with Smith's goal.

The smaller home could also fill a need for some potential Habitat homeowners. At Habitat, they try to place homeowners in a house and location that best suits their needs.

Donaldson, who works at the Department of Human Services, learned about the Habitat process through his church, First Assembly of God in North Little Rock.

The church has "partnered with us quite a bit and brought us a lot of really great homeowners," Plunkett says.

Donaldson spends much of his free time at the church, volunteering with the youth group as a mentor ("kind of like a big brother"), hanging out with the young adult group and working in child care during single-mother group meetings and events.

"I had seen a few members of our church go through the Habitat process," he says. "They told me it's a good leg up when you're trying to restart or start a new life."

When a potential homeowner submits an application, it's processed by a Habitat employee and they are fully vetted, with research into their income, credit history and personal needs regarding neighborhood and house size. There's a homeowners selection committee that considers finalists, then the board of directors selects the next home recipient.

While he was going through the process, Plunkett, Smith and their teams were working together and with the city and Baring Cross neighborhood association to pave the way for their first small home.

Plunkett says this is the 45th or 46th Habitat home in Baring Cross, a North Little Rock neighborhood that Habitat has targeted for a revitalization effort. Habitat has worked closely with residents, the homeowners association, the mayor, church and police department in an effort to improve the area, which had become rundown and crime-ridden.

"You can see that neighborhood change," Plunkett says. "Homeownership makes a huge difference in the way that people take care of the neighborhood. It's amazing to me."

And Plunkett says the police department has taken an active, positive interest as well.

"It's fun to see the kids run to the policemen because they like them and they're friends. You just get a different feel for that neighborhood than you get in a lot of places in this community. We'd like to see that everywhere."

Plunkett says they also got approval from North Little Rock Mayor Joe Smith, though he was a bit skeptical at first.

"Tiny houses don't always get the best reception because people immediately think it's something on wheels. It's a container. When he found out this was none of that, he was much happier with it. At the end of our presentation to him, he said, 'OK. Make us proud.'"

With the green light from the necessary agencies and a perfect homeowner in Donaldson, all the stars aligned.

"It did all seem to come together right away as it should," says Smith. "There weren't any stops, starts, go backwards."

Donaldson found out he was the next Habitat homeowner at the organization's ReStore and After fundraiser in September.

And how did he feel about the size of his new home?

Donaldson, who says he's lived off and on with friends and family over the years, is just looking forward to having a place of his own. "I was just excited to have a house. Give me a cardboard box that says my name on it and I would have been happy."

Construction is well-underway and everyone says so far, so good. The house is about half the size of a usual Habitat house and that has brought some challenges, but those are welcomed by the volunteers and designers.

"We are blessed with a group of volunteers that are ex-engineers," Plunkett says. "They love a new project like this, where they get to go design and work with USGBC and come up with new ideas. It's what we thrive on."

The floor plan has already changed multiple times as they find new ways to save space and make the home more efficient.

The walls were pre-fabricated, and Smith says that on wall-raising day, it took only three or four hours: "It was amazing to see a house go up that fast."

And, as always with Habitat projects, homeowner Donaldson has been right there, putting in his "sweat equity."

Working on the house makes the situation "more real," he says, adding, "Also, it's not just a handout. I'm actually working towards something. That makes me more comfortable with receiving the house and all the great amenities and blessings coming with it."

The project has been so smooth that Plunkett says they hope to put another small house right next door to Donaldson's.

While Smith says she may not be able to contribute financially to future Habitat projects, she does hope the groups can continue to partner in other ways, by sharing expertise, information and arranging for future donor relationships.

But for now, the focus is on Donaldson's house, which should be completed early next year.

USGBC has been involved in making suggestions about materials and appliances. There are many partners, such as Valspar paints and Whirlpool appliances, that regularly donate to Habitat. So Smith and her team can advise which products to choose.

"We've been able to suggest in certain areas if there's a choice between this faucet or this type, to go with one that would save more water," Smith says.

And it should be affordable. Plunkett estimates that the interest-free house payments will be less than $300 a month. Smith thinks utilities should be less than $100 total.

"Should give you a big leg-up, bud," Plunkett says.

Donaldson replies, "I hope so!"

Donaldson and his house will be a guinea pig, in a way.

"We really wanted this to be almost a demonstration project," Smith says.

They'll monitor Donaldson's utilities over time to see if the appliances and products will save him money in the long run.

"I think that can show anyone who's building a house that you can use these things and it doesn't really add to the cost," Smith says. "It just makes good sense for the family that owns the house but also in thinking about the environment."

The home won't be officially Leadership in Energy and Environmental Design-certified. Houses have to be at least 1,000 square feet to get that designation. But it will still use the strategies for LEED buildings.

For Donaldson, he's just excited to finally have his own space, though he doesn't plan to keep it all to himself. He envisions it as a place where neighborhood kids could come and work on their homework in a safe environment.

He says,"It's just a blessing beyond any prayer I could have asked for."

For more information, contact Habitat for Humanity of Central Arkansas, (501) 771-9494 or visit habitatcentralar.org.