Foley: Trojans ready for another challenge 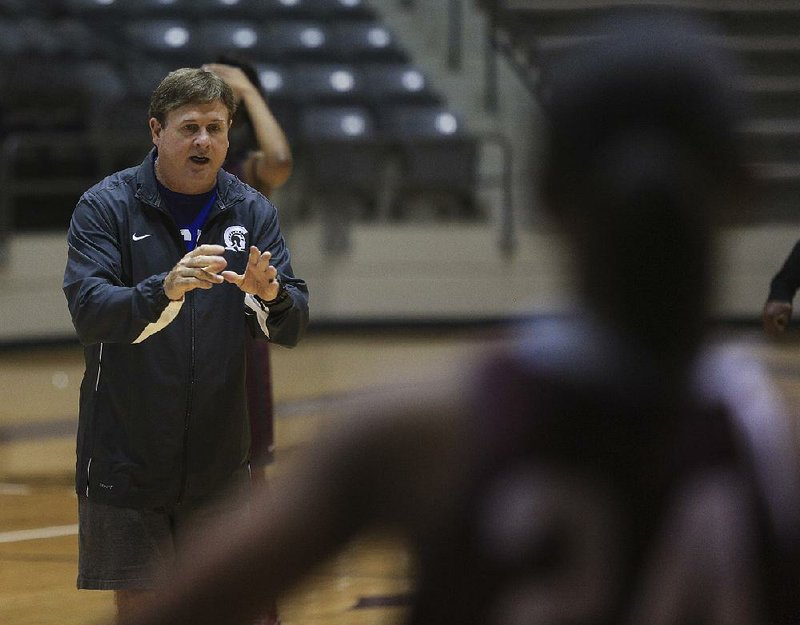 UALR women’s Coach Joe Foley and the Trojans will attempt to snap a three-game losing streak when they take on Texas A&M today at the Jack Stephens Center in Little Rock.

The Trojans welcomed then-No. 6 Texas to the Jack Stephens Center that night, and for that third quarter, they couldn't have played better defense. They shut out the Longhorns in those 10 minutes, taking a 48-35 lead into the fourth quarter.

The Trojans lost the game, 66-56, but Coach Joe Foley learned something about his team.

The tough nonconference lesson, Foley still thinks, helped produce a 15-game winning streak that took the Trojans to the final of the Sun Belt Conference tournament and led to a WNIT berth.

Foley hopes the Trojans (1-3) learn something just as valuable today, when they host Texas A&M (3-0) at 6:30 p.m. It's the biggest benefit, he said, to loading his schedule up with such challenging opponents.

"The Oklahoma game gave us, we still didn't win, but it let us know that we can play," Foley said.

Foley has been scheduling similar games since he got to UALR, but the recent difference lies in where they're played, as they're now playing tough early-season games in front of inviting home crowds. UALR hosted LSU in 2013, Oklahoma in 2014 and Texas last season. The Texas A&M series is the second in a four-game series, while the Mississippi State game starts a four-game series.

Recent success provided UALR with the opportunity, Foley said, with teams knowing UALR's reputation of putting together 20-victory seasons and not hurting their RPI ranking.

"We're fortunate we put it together," Foley said.

Foley and Texas A&M Coach Gary Blair have been friends since Blair was at Arkansas and Foley at Arkansas Tech. And it will be the third consecutive season the teams have played. UALR beat Texas A&M in the first round of the NCAA Tournament in 2015, 69-60, and Texas A&M won last season in College Station, Texas, 69-39.

"They've got a lot of kids who are now getting their opportunity, a lot of them were on the bench last year," Foley said. "I think it has the potential to be a pretty good game."