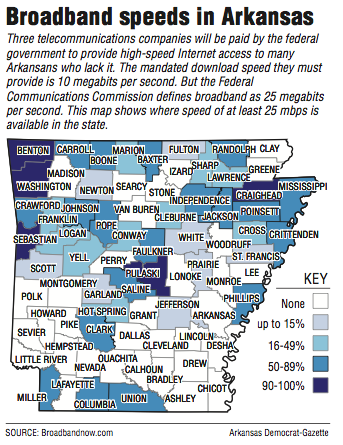 Arkansas is part of a national experiment to see if wireless Internet can serve vast rural areas that telecommunication companies say are unreachable with copper or high-speed fiber-optic cables.

Three telecommunications companies will receive more than $322 million from the federal government over six years to provide high-speed Internet access to more than half of the number of Arkansans who lack such service. One will provide the service wirelessly while the others will use wire.

The company with the largest rollout -- AT&T Inc. -- is using the money to be able to connect customers to the Internet wirelessly, using existing cell towers and pizza-box-sized antennas outside homes and businesses. The first connections will go online in mid-2017.

The companies will set up the infrastructure to provide Internet service. Customers will then pay to access that service.

"In these rural parts of these counties, there is nothing out there right now. There is not -- in most places, unless you've got satellite broadband -- there is not a broadband product," AT&T Arkansas President Ed Drilling said in a recent interview.

The wireless technology is not new. Dozens of homegrown Internet service providers have used it to reach rural Arkansans -- some for more than a decade.

However, AT&T's move into the space -- and the millions in federal funding supporting it -- concerns existing wireless Internet providers who say they were ineligible for the same subsidies from the Federal Communication Commission's Connect America program.

The companies using the federal dollars to connect Arkansas customers via wires are CenturyLink and Windstream.

The FCC estimates that two customers per every home and business will be connected. The three companies have committed to connecting a total of 128,500 homes and businesses, meaning that roughly 257,000 Arkansans will be affected by the new installations.

About 550,000 Arkansans don't have access to the sort of speeds the companies are required to offer, according to wireline data from the National Broadband Map.

Arkansas ranked 34th in the country for broadband speed, according to the map, but that ranking was based on an older definition of broadband that much of rural Arkansas barely met when the data was collected in 2014.

According to more recent data collected by the website broadbandnow.com, Arkansas now ranks 48th in the nation in terms of the percentage of its population that has access to broadband speeds of at least 25 megabits per second.

Drilling said the wireless product is one solution for those parts of the state where residents rely on aging telephone lines or cellphones to connect to the Internet.

During legislative meetings held to find a solution for low broadband availability around the state, providers said it costs tens of thousands of dollars per mile to lay cable, depending on the terrain.

That makes it hard to make money or break even on new installations to rural Arkansas, where homes can be miles apart and where many will choose not to pay for Internet access.

"You can view it as what the railroads meant to these cities in the 19th century and what electricity meant in the early part of [the 20th] century, and what interstates mean in terms of connectivity and what a city needs to thrive," Drilling said.

But "unlike electricity, you don't have pretty much the guarantee that every one of those living units is going to take the service."

Drilling said AT&T has the infrastructure in place to provide the wireless technology, which customers will pay to access.

AT&T offers wireless phone service, which means the company already has most of the cell towers required to wirelessly provide Internet service -- though it will be installing new equipment so the new Internet offering will run independently of its cell service.

To provide the wireless Internet service in Arkansas, AT&T will receive $21.2 million a year from the federal government for the next six years to connect more than 51,400 homes and businesses.

Ten companies -- including AT&T, CenturyLink and Windstream -- will receive nearly $9 billion in support to connect 7.3 million rural consumers in 45 states and one U.S. territory.

AT&T, which is expanding Internet connectivity in 18 states, is using the wireless technology in all of them.

AT&T's plan and the millions in federal dollars supporting it raise concern among companies already providing wireless Internet in Arkansas.

"We are small businesses that do not need federal handouts to deploy networks," said Elizabeth Bowles, president and chairman of Aristotle Inc. and former president of the Wireless Internet Service Providers Association. "We not only are unsubsidized, we are already providing rural America with broadband."

"It's not supposed to happen," she said. "However, the way the rules are written, unless the same provider offers both broadband and phone, then the rules don't apply."

Aristotle has started offering phone service that utilizes the wireless broadband connection, she said, but not all companies do so.

"This is something that was created years and years ago -- in 1934 with the Telecommunications Act -- to provide money to get phone service into rural America," Bowles said. "So phone companies get it, get to do it, and if you're not a phone company, you don't."

She said she doesn't blame AT&T for using the rules to its advantage, but would like the federal government to reconsider how it provides funding.

In northeast Arkansas, Cave City-based Hillbilly Wireless has about 1,500 customers and 150 towers, said Mike Schreiner, network engineer for the company.

The company covers places like Paragould, Melbourne, Blytheville and Jonesboro. Schreiner said AT&T's expansion into wireless Internet is a concern.

"We've applied for grants and funding, and we never would get it," he said. "It went to the bigger guys. We've had to go at our own pace on our dime."

Schreiner said Hillbilly Wireless is the largest fixed wireless company in the state in terms of coverage. The company started in 2006 to provide Internet to people outside Cave City who had no other options, and then the company expanded from there.

AT&T must provide an average speed of 10 megabits per second to rural Arkansans under the terms of the federal grant.

Pricing has not been finalized for the wireless service. A company spokesman declined to say where it planned to provide the service, citing the competitive nature of the telecommunications industry.

Some in the wireless industry feel threatened by the government-backed competition. Others have raised doubts about the ability to provide the required speed on wireless connections and about upgradability.

The FCC required grantees to provide a 10 megabits-per-second download speed, but it defines broadband as 25 megabits per second.

"Frankly when they approved 25 megabits per second as the definition of broadband, not only in Arkansas, but across the country, that meant that about 40 percent of the country didn't have broadband anymore with the stroke of a pen," Drilling said.

For example, a 25 megabits-per-second connection would be good enough to play five high-definition television programs on Netflix at one time, according to the streaming service's recommendations.

"I think we'll get there," Drilling said. "This product is going to improve over the next several years, and I think the speed will get better."

But Ron Warren, an associate professor of communication at the University of Arkansas at Fayetteville, said even the new broadband definition could quickly become outdated.

"Even 25 megabits a second is slower than what we're going to need to do some of the things we want to do with broadband in the state. You need to look at a standard that's probably double the FCC's minimum for downloading," he said.

"But it's tremendously difficult. We're not going to convince for-profit companies to lay fiber all over the state. It's not lucrative for them to do it, so if wireless technologies give them the ability to recoup their dollars, that's where their efforts are going to go."

Mark McMurtry, an association professor of Management Information Systems at the University of Central Arkansas, studied the "digital divide" between the young and old in a 2013 study and found that senior citizens were embracing broadband.

But he said a lack of access because of geography holds people back.

"Certainly, we want as many people as possible to get on the information superhighway, to use an older term," he said. "All these underrepresented groups -- whether it's young or old or rich or poor or urban or rural -- we don't want them left out."