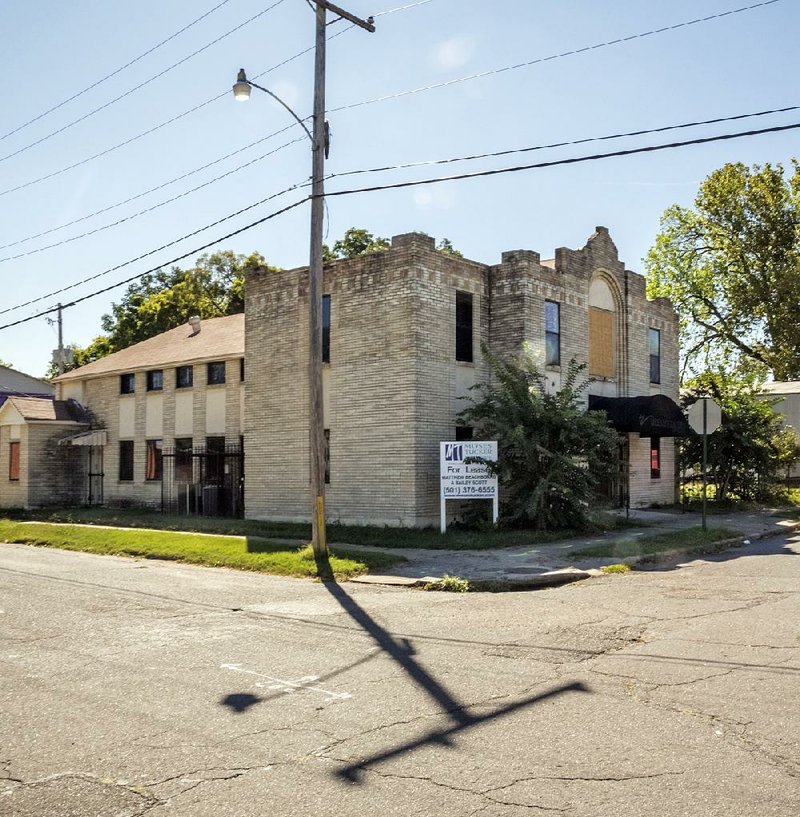 Little Rock entrepreneurs are planning to open Bark Bar, an off-leash dog park and bar, at 1201 Spring St. The business owners face regulatory challenges at the local and state level before they can move forward with the concept, which has gained popularity in other states. ( John Sykes Jr.)

The list of challenges facing the owners of Bark Bar, a combination dog park and watering hole for humans, is lengthy. 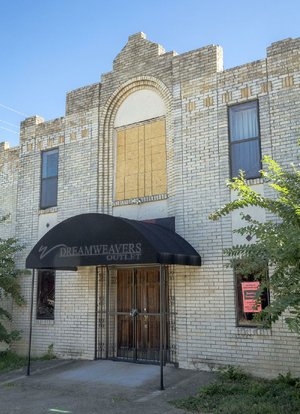 Photo by John Sykes Jr.
Formerly a church and retail space, the building at 1201 Spring St. is the proposed location of Bark Bar, an off-leash dog park and bar. Adam and Amanda Day purchased the property for $250,000 in 2015.

There are regulatory hurdles involving the state Department of Health, the city of Little Rock and the state's Alcoholic Beverage Control Board. Should the owners make it through all the permitting and zoning processes, then attention will turn to preparing the property at 1201 Spring St. for a concept that has gained popularity elsewhere but is new to the state.

Still, friends and business partners Cara Fowler and Elizabeth Michael are confident they can replicate a concept that has worked in places such as Austin, Texas, and Charlotte, N.C.

Dog-friendly patios are available at bars and restaurants throughout the state. Only service dogs are permitted inside under current law, and those involved with Bark Bar are aware their concept is a difficult one for regulators to consider.

"This is the first time anything like this has been done in Arkansas, but everyone is really wanting it to happen," Michael said. "The Health Department, [the Alcoholic Beverage Control Board], we've been really working with them closely to make sure we can accommodate all of the regulations in Arkansas. We think it can work."

Fowler and Michael, both dog owners, developed the concept earlier this year over drinks. They are working with architect and property owner Adam Day on a design for the building that will satisfy the Health Department. Bark Bar received approval from the city's Board of Adjustment last week, and Day, Fowler and Michael will meet Tuesday with officials from the Health Department for an additional brainstorming session.

Conversations with the Health Department have been ongoing for several months. Sherri Woodus, section chief for the department's retail food program, said the state routinely keeps its eye on trends in other states and was prepared for local interest in the concept.

At least four different potential business owners have reached out with questions related to the state's 143-pages of rules and regulations related to food establishments, Woodus said. Owners of Bark Bar in Little Rock are the furthest along in the process, she said.

In addition to food safety concerns, questions pertaining to the safety of pets, their owners and patrons will have to be addressed before approval can be granted. On paper, the concept sounds like a long shot, but Woodus said it isn't a flat-out no from the agency.

"There are many things that could go wrong, but just as many things could go right," Woodus said. "This is uncharted territory. There have been establishments in other states where they have attempted this. We're not trying to stifle anyone's entrepreneurial spirit. There could be that right connection where things work out, but we want them to walk into this with their eyes wide open."

Day, an architect with AMR Architects Inc., and his wife, Amanda, purchased the two-story, 3,502-square-foot property in 2015 for $250,000. Briefly, Day said, the couple discussed living in the 66-year-old property, which was once home to the St. Paul Temple African Methodist Episcopal Zion Church, and most recently as a retail location for Dreamweavers Inc., a home-goods manufacturer.

Adjacent to the building is a fenced yard with about 3,500 square feet of space. Inside are about 1,700 square feet that would be used for off-leash space for canines and 700 feet of retail space where food and beer can be ordered.

Plans call for a full-service bar with 12 beers on tap, plus food for humans, and a retail area with dog-related merchandise to open by spring 2017. Bark Bar would need to obtain the usual beer and/or liquor license from the state's beverage control board, though the agency has no dog-related regulations on the books.

"We've worked through some design iterations to create, basically, a building within a building," Day said. "We'd like to start construction as soon as we get through the Health Department. Once we get through that, we'll be green-lighted to go."

In the meantime the owners are planning how to collect and dispose of waste. They are also looking at landscaping and technology options to cut down on noise in a neighborhood that is largely commercial but located near residential areas.

A similar concept in Denver closed in 2015 after about a year in operation because of complaints to the city about noise and waste. Yard Bar opened in Austin in 2015, and owner Kristen Heaney said via email that reception in the city "has been incredible!"

"Our park goers are the best. We have a strong community of regulars and new visitors come to check us out daily," Heaney wrote. "It's dogs and beer! Who doesn't love that? Yard Bar is pretty much the happiest place on earth."

What Heaney describes is what those behind the efforts in Little Rock envision. To ensure that animals allowed on the property are properly vaccinated, Bark Bar plans to issue memberships based on health records. Those can be purchased for $5 for a single day, $20 for a month and $150 for the year.

"We have seen it work in other places and believe it can work here," Fowler said. "Who doesn't love dogs and drinks?"