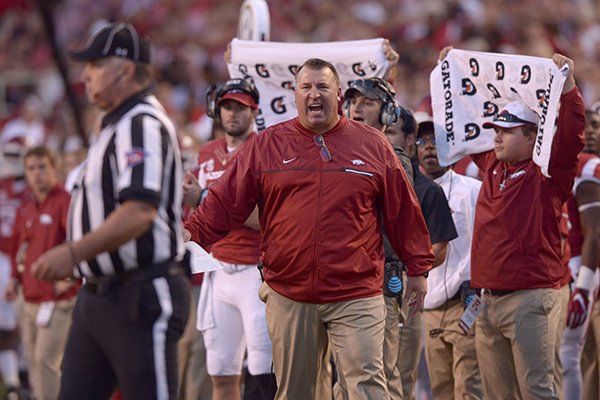 Arkansas coach Bret Bielema yells at officials during a game against Alabama on Saturday, Oct. 8, 2016, in Fayetteville.

FAYETTEVILLE — Bret Bielema, who was unhappy about a holding penalty called by umpire Stan Weihe that negated a touchdown on Saturday, said he has been told Weihe would not work future Arkansas games.

Bielema drew an unsportsmanlike conduct penalty after an Arkansas field goal at the end of that drive late in the second quarter.

Bielema argued on the field that he had been told the umpire is supposed to look for holding from guard to guard. Weihe's flag was thrown against Arkansas right tackle Brian Wallace. ESPN analyst Todd Blackledge, while watching a replay of the call, said it appeared Alabama rusher Da'Shawn Hand lost his footing on a spin move and Wallace finished his block by pushing Hand down as Drew Morgan hauled in an 8-yard touchdown pass from Austin Allen.

"For a lot of reasons we're probably just better off moving forward," Bielema said when asked about the holding penalty on Monday. "I can be rest assured, and all Hog fans can, that we'll never see that official again. That's been guaranteed to me. That makes my heart and my wife's heart probably feel a little bit better."

Weihe was the umpire for Arkansas' 35-28 overtime loss to Texas A&M in 2014, during which tackle Dan Skipper was called for tripping away from the play on a long Jonathan Williams run to the Aggies' 1 yard with Arkansas holding a 28-14 lead early in the fourth quarter.