Hutchinson maintains support of Trump: 'You vote for a team' 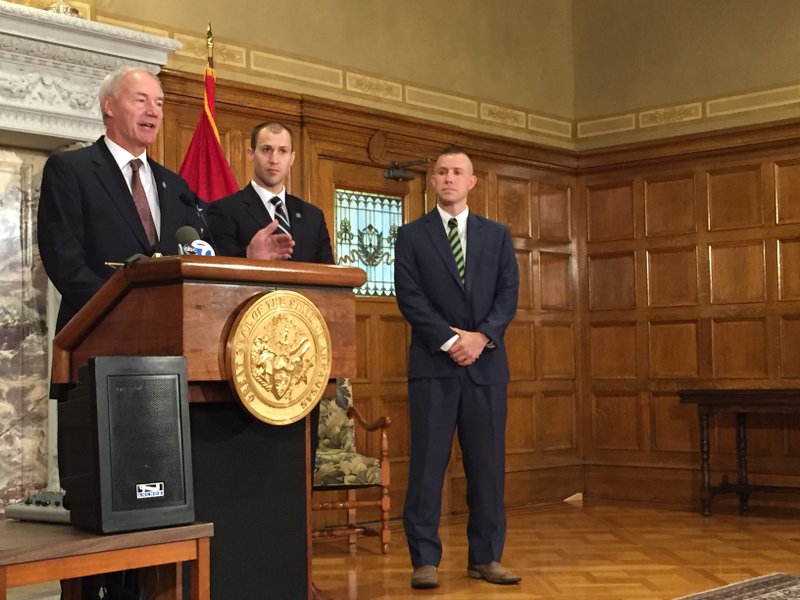 Hutchinson told reporters in a news conference Thursday that he is "troubled" by Trump's rhetoric. Hutchinson said he is "not following the allegations that closely" as he prepares for a trip to China.

Hutchinson called Trump's language "unconscionable" and said the actions Trump described in a 2005 video reported by The Washington Post and NBC News do depict an act of sexual assault if those statements are true. Trump has dismissed the comments as merely "locker room talk" and said they paled in comparison to what he called Bill Clinton's abuse of women.

In regard to the most recent allegations from two women who spoke to the New York Times, Hutchinson said he was not aware of all the details of those instances.

"I think that some of these are multiple decades old. That does not necessarily make a difference. I think you've got women making claims of sexual inappropriate conduct on both sides of the fence, and you could ask the same questions [of the other side]," Hutchinson said.

"As a person, I take all of those allegations very seriously. But in the context of a political campaign, it gets very muddy," he added.

Hutchinson said his evaluation of the candidate was based on "big picture" issues such as the economy, Supreme Court nominations and combatting the Islamic State, which is why he believes Trump to be a better alternative to Democratic nominee Hillary Clinton.

When asked if Trump could ever do something that would be considered a "deal-breaker" for his support, the governor responded: "You don't know what the future holds, so I'm not going to comment on that."

Hutchinson then listed several problems people have with Hillary Clinton's candidacy and said one could argue there are "deal-breakers" on both sides. He noted he previously supported other candidates such as Marco Rubio and former Arkansas Gov. Mike Huckabee but said that he pledged to vote for the party nominee.

"You vote for a team," Hutchinson said.