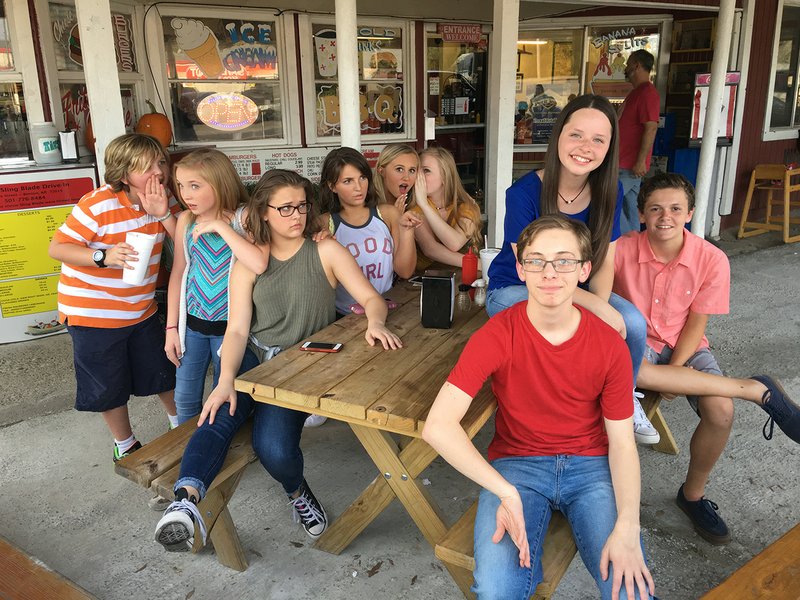 Appearing in the Young Players Second Stage’s upcoming production of 13 are, clockwise from left, Zachary Glover, who will appear as Malcolm; Madison Stolzer as Molly; Annslee Clay as Charlotte; Isabella Hammonds as Cassie; Makalya Shipe as Kendra; Morgan Jones as Lucy; Jack Clay as Archie; Gretchen Bush as Patrice; and Will Porter as Evan. The musical will open Friday at the Royal Theatre in Benton.

BENTON — The Young Players Second Stage (YP2S) will present the Broadway musical 13 on Friday through Oct. 30 at the Royal Theatre, 111 S. Market St. in downtown Benton.

YP2S is a branch of the Young Players program, which began in 2002.

Based on a book by Dan Elish and Robert Horn, 13 features music and lyrics by Jason Robert Brown.

The local production is under the direction of Justin Pike of North Little Rock. Daphne Shoppach of Benton is the musical director and co-producer with Melissa Glover, also of Benton.

Moriah Patterson of Sheridan is the choreographer, Cara Smith of Benton serves as stage manager, and Matthew Glover of Benton is the assistant director.

Pike and Shoppach founded YP2S in 2013 and presented its first production in January 2014. Pike said the group “exists to provide advanced theatrical opportunities to like-minded, creative young people in the greater-central-Arkansas area.” Young people ages 13 to 23 are eligible to audition and participate.

The musical 13 premiered in Los Angeles in 2007 with an all-teenage cast and opened on Broadway in 2008. After 105 performances on Broadway, the production closed in 2009. There have been several post-Broadway productions, as well as community-theater productions.

Pike said the play revolves around the character Evan Goldman, “who is plucked from the fast-paced, preteen, New York City life and plopped into a sleepy Indiana town following his parents’ divorce.

“Surrounded by an array of simple-minded middle-school students, he needs to establish his place in the popularity pecking order,” Pike said. “Can he situate himself on a comfortable link of the food chain, … or will he dangle at the end with the outcasts?”

Melissa Glover said this musical “is very popular among the young teen set. There was a lot of local interest in doing this play and being in this play.

“It’s all about being 13,” she said. “It’s about the trials and tribulations, and the social pressure, of being a teenager. All of the cast members are between the ages of 12 and 14; we have a cast of 23.”

Glover, who has been involved with the Young Players for about five years, said the production is also a fundraiser for the Young Players’ educational theater tour to New York City, planned for next summer.

“We will be taking a group of 37 people, which includes a few adults, to New York City in July 2017,” Glover said. “Many of the kids in this cast will be going. We have been selling cookies, washing cars … to raise money for this trip.

“For a major fundraiser, we decided to do what we do best — present a play for the community. We were able to secure a time slot at the Royal Theatre. We have been rehearsing off-site, and we will move into the theater this week to continue our last few days of rehearsals.”

Glover said the New York City trip will include attending two Broadway productions and a children’s workshop with a Broadway professional.

The cast of 13 includes the following:

• Will Porter of Little Rock as Evan;

• Jack Clay of Sheridan as Archie;

• Will Gordey of Bryant as Brett;

• Morgan Jones of Bryant as Lucy;

• William Alverlo of Bryant as Eddie;

• Zachary Glover of Benton as Malcolm;

• Annslee lay of Sheridan as Charlotte;

• Isabella Hammonds of Benton as Cassie;

• Noah Lee of Benton as Richie; and

• Carson Clay of Sheridan as Simon.

Members of the ensemble are Hannah-Grace Fitz, Alex Lanier, Mia Simone Parker and Savannah Rye, all of Bryant; JuliAnne Flora and Katie McCallister, both of Benton; MaKaylei Taylor, MaKenzie Taylor and John Michael Murphy, all of Little Rock; and Rylee Woodard of Harmony Grove.