Arkansas Evangelicals torn over 2 nominees; dissatisfaction said to be widespread 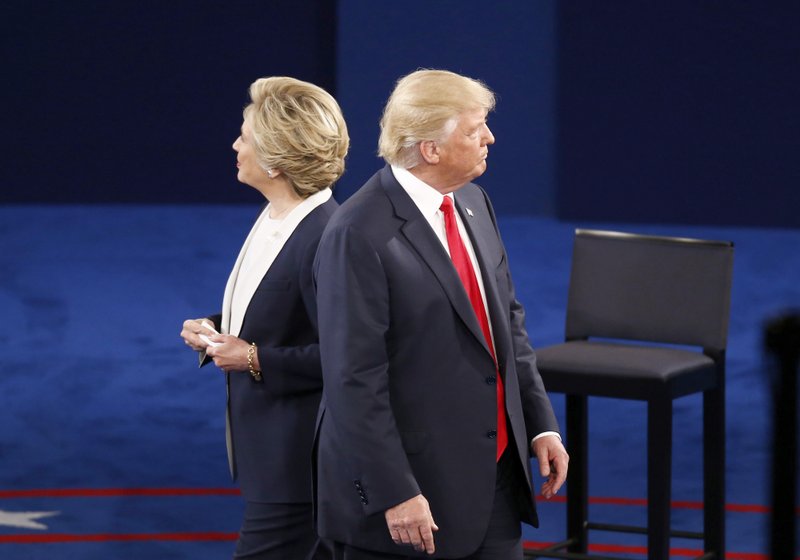 Hillary Clinton and Donald Trump on stage during the second presidential debate at Washington University in St. Louis.

WASHINGTON -- Evangelical Christian leaders who have backed Republican presidential nominees for decades are torn over whether to support the party's standard-bearer this year.

Some say they're uncomfortable backing either Donald Trump or his Democratic opponent, former Secretary of State Hillary Clinton.

Others say they'll cast Republican ballots because they believe in the party's values, though not necessarily its nominee.

Regardless, there is widespread dissatisfaction with this year's options.

[INTERACTIVE: The 2016 election in Arkansas]

"I'm not for any of the candidates," said Arkansas Family Council President Jerry Cox. "A lot of conservatives and a lot of church-going people are probably in the same situation."

A longtime activist who served on former Gov. Mike Huckabee's Faith and Family Values Coalition during the 2008 presidential campaign, Cox won't say which candidate is getting his vote this time.

When he walks into the voting booth, "I believe I will have to hold my nose, hold my breath," he said, adding, "This is not going to be a fun election for any of us."

The Rev. Don Hutchings, pastor of Evangel Temple in Fort Smith, said a lot of Christians are experiencing "angst and anxiety" as Election Day nears.

"I could never see myself voting for Hillary because I'm so pro-life and her idea of [potential] Supreme Court justices just makes me nervous. But hearing the vulgarity and retched talk from Donald Trump makes me run in another direction," he said.

When Mitt Romney ran for president in 2008, Hutchings joined the candidate's National Faith and Values Steering Committee and felt good about his decision.

This time, the Assemblies of God minister is uncertain whom he'll support. He just knows it won't be the Republican, Democrat, Libertarian or Green party nominees.

"My advice to the church is pray like you've never prayed. Fast. Seek God's wisdom, not your own. Think about the next generation and be willing to tell your grandchildren why you voted for who you voted for," he said.

"That seems to be a worry-free, stress-free, anxiety-free solution."

White evangelical Christians have been a key GOP voting bloc since 1980, voting overwhelmingly for candidates who opposed abortion and, more recently, gay marriage.

Numerous polls show that Trump has the support of most rank-and-file evangelicals.

But there's a split among the leadership over whether to embrace the thrice-married New York billionaire, a reality show star who boasts of his sexual conquests and displays little familiarity with evangelical teachings.

Others say they are horrified by the way the candidate is co-opting the church.

In an editorial, Christianity Today said Trump is "the very embodiment of what the Bible calls a fool."

The Rev. Jay Dennis, a Fort Smith native and the pastor of a Lakeland, Fla., Southern Baptist megachurch, said the tone of the election troubles him.

"Never in an election have I found myself so conflicted; not on what party platform I will support; but on how I as a pastor can respond to the meanness and arrogance associated with the election; and respond with wisdom, grace, and biblical conviction," he said in an email.

"Showing the attitude of Christ in an election has never been so challenging. Honestly, both candidates have made that difficult at times because of their words, actions and attitudes."

Ultimately, he said he'll base his vote on the issues instead of the candidates' personalities; Dennis said he'll be voting for his biblical convictions -- and Trump -- on Nov. 8.

But James Hamilton, a professor of biblical theology at Southern Baptist Theological Seminary in Louisville, said he'll reject Trump and look for someone who reflects "the fundamental decency of the American people."

The Arkadelphia native said he's considering voting for Evan McMullin, a conservative, 40-year-old former chief policy director for the House Republican Conference who is running as an independent candidate.

"Both the Republican and the Democrat party failed us and we really need new candidates," he said. "It's a shame this election has to go forward with this binary choice."

Saying he understands the "desperation," that has led some evangelicals to rally around Trump, Hamilton warned that Trump apologists are "defending the indefensible."

Few evangelicals have backed the candidate longer or more energetically than Huckabee, who has used his perch on Fox News to belittle Trump's opponents.

Bishop Robert E. Smith, a Little Rock minister who served as a delegate to the 2008 Republican National Convention, says Huckabee and other Christian leaders who embrace Trump are "throwing their principles out the window. ... I'm disappointed but not surprised."

"If Hillary wins, everybody's in trouble. Everybody. If Trump wins, only the strong will win. The weaklings, they're going to be brushed to the side. It's going to be messy," he said.

While Trump has faced criticism from some corners, he's made clear that he wants Christian conservatives' support.

"I love the evangelicals," the Presbyterian said.

Earlier this year, he created an Evangelical Executive Advisory Board, a panel that includes the Rev. Ronnie Floyd, pastor of Cross Church in Northwest Arkansas and former president of the Southern Baptist Convention.

In an email, Floyd said the post enables him to "communicate clearly the gospel of Jesus Christ and a biblical worldview."

It's the kind of advice he would gladly give to any presidential candidate, he said.

While "the American people and especially evangelicals have serious questions about the character of both candidates," ultimately one of the two nominees will end up in the White House, he said.

The winner will shape U.S. policies on religious liberty, abortion, national security and other key issues, while also appointing as many as four U.S. Supreme Court justices, he said.

"Presidents will come and go, but their appointments can last for a generation," he said.

"This election is not about these two personalities as much as it is about the future of America," he said. "The key is not whom we endorse, but which of these two candidates endorse what we as evangelicals believe and practice."

"We don't have a candidate we can be happy with. ... We're really picking between two evils or two lesser desirables," he said.

"He, at least, is listening," Draper added.