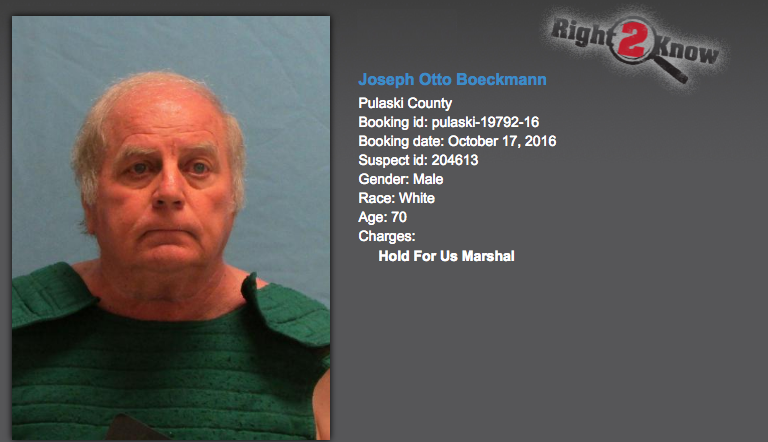 A former Arkansas judge has been arrested on federal fraud charges stemming from allegations that he traded lighter sentences or threw out cases in exchange for sexual favors or nude photos from defendants.

Joseph Boeckmann was arraigned Monday in U.S. District Court in Little Rock. He was ordered held until a detention hearing on Wednesday.

LITTLE ROCK — A former Arkansas judge accused of giving lighter sentences to defendants in exchange for nude photos and sexual acts has been indicted on federal fraud and bribery charges, according to a federal indictment unsealed Monday.

Former Cross County District Court Judge Joseph Boeckmann resigned in May after an investigation into allegations of inappropriate sexual relationships with men accused of crimes dating back decades, to his time as a prosecutor. The 70-year-old Boeckmann allegedly had more than 4,600 photos of nude or semi-nude men.

A grand jury accused Boeckmann of corruptly using his official position as an Arkansas district judge "to obtain personal services, sexual contact, and the opportunity to view and to photograph in compromising positions persons who appeared before him in traffic and misdemeanor criminal cases in exchange for dismissing the cases." The indictment is dated Oct. 5.

Boeckmann's attorney, Jeff Rosenzweig, did not immediately return a message seeking comment Monday. Boeckmann has previously denied the allegations through his attorney.

Boeckmann was indicted on eight counts of wire fraud, two counts of witness tampering, one count of federal program bribery and 10 counts of violating the federal Travel Act.

Dozens of men have accused Boeckmann of sexual abuse and misconduct, saying the small-town judge paid them to allow him to spank them with a paddle and to take photos of the red skin. Others said they posed nude in exchange for money to pay off court fines.

Others, some of whom were underage, said Boeckmann would offer them community service in lieu of court fines and fees. The assignments often involved going to his house or another location, taking off their shirts, bending over and pretending to pick the cans up while, they allege, Boeckmann took photos.

The head of the Arkansas Judicial Discipline and Disability Commission, which conducted the initial investigation, has called the allegations "if not the worst, among the worst cases of judicial misconduct" in state history.