Medicaid expansion a success in Arkansas, around the country, U.S. Health and Human Services Secretary says 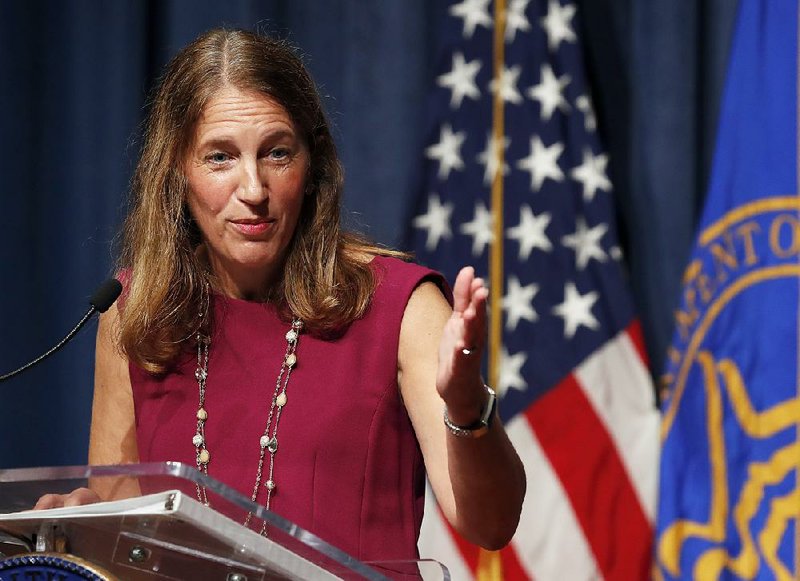 Arkansas’ expanded Medicaid program probably has worked “even better, possibly, than one might have thought,” Health and Human Services Secretary Sylvia Burwell said Wednesday in Washington.

WASHINGTON -- Medicaid expansion has been a success in Arkansas and around the country, U.S. Health and Human Services Secretary Sylvia Burwell said Wednesday.

She predicted that enrollment in the federal Health Insurance Marketplace will climb to 13.8 million in 2017, up by 1.1 million.

That would be a 9 percent increase over last year's enrollment numbers.

Arkansas has used the federal marketplace but is taking over responsibility for the state's exchange for individual consumers this year.

Under the new arrangement, Arkansans will continue to enroll through the federal system, while the state will be responsible for promoting enrollment and certifying the plans sold on the exchange.

Unlike most other states, Arkansas uses its health insurance exchange as a primary way of providing Medicaid coverage to low-income, nondisabled adults.

More than 300,000 Arkansans were enrolled in Medicaid-supported exchange plans under the state's so-called private option as of Sept. 30.

An additional 59,872 Arkansas were in non-Medicaid exchange plans as of Oct. 1.

While Republicans say the federal Patient Protection and Affordable Care Act is a failure and should be repealed, Burwell portrayed the program as a historic success.

"We have the lowest uninsured rate in the history of the nation," she told reporters. "We've reduced the uninsured by 20 million."

Burwell is a former president of the Walmart Foundation. Wednesday's remarks came as several health care insurers prepare to sharply raise their rates -- or to withdraw from the marketplace altogether.

The Arizona Republic reported Wednesday that Blue Cross Blue Shield of Arizona would raise its health exchange rates by 51 percent.

Last week, Blue Cross Blue Shield of North Carolina announced that it would increase its rates by 24.3 percent.

The company said few young people are enrolling in the health exchanges. Those who sign up tend to be older, require more services, visit the emergency room more often and are more likely to have chronic and costly conditions, it added.

The company said government subsidies would cover most of the price increase.

"Issuers are adjusting their prices, bringing them in line with actual data on their costs," Burwell said Wednesday.

Rate increases around the country wouldn't dramatically affect most consumers, she said, noting the availability of government subsidies.

"Thanks to financial assistance, most people shopping on the marketplace will still be able to find a plan that is less than $75 per month," she said.

Since its inception, the states haven't been required to pay for the expanded Medicaid program. But beginning next year, they'll have to pay 5 percent of the costs. The states' share gradually will increase, reaching 10 percent in 2020.

"The costs have gone through the roof, and the policies ... have such high deductibles," said U.S. Rep. Bruce Westerman of Hot Springs. "I think it's been a total failure and I think it's imploding on itself."

U.S. Sen. Tom Cotton of Dardanelle said the administration's Medicaid expansion claims "are nothing short of delusional. Report after report show that premiums are increasing by more than 50 percent as insurers flee the exchanges. And fewer people have private health insurance today than in 2007. Even the Obama administration's best Obamacare spin can't hide those realities."

"The people that are getting killed in this deal are small business people and individuals who make just a little too much to get any of these subsidies," he said.

"So you've got this crazy system where all of a sudden 25 million more people have health care and then the people who are out there busting it, sometimes 60 hours a week, wind up with their premiums doubled and their coverage cut in half. It's the craziest thing in the world," Clinton said.

Burwell said things haven't always gone smoothly, but insisted that the administration has made progress.

"Building a new market is never easy," Burwell said. "It also hasn't helped that at nearly every turn, we've had to overcome attempts to repeal and undermine the law through legislation and litigation."

"Ultimately, the marketplace is strong and will continue to be strong because it offers a product that people want and they need," she said.

Enrollment in Arkansas' expanded Medicaid program topped 324,000 in September, with 301,009 of those enrolling in the private option. The other 23,309were placed in the traditional fee-for-service Medicaid program.

Asked about Arkansas' program, Burwell portrayed it as a success.

"I think we believe it has worked ... in Arkansas in terms of coverage and also in terms of the benefits that are occurring," she said. "As a matter of fact, I think, we would probably say it worked even better, possibly, than one might have thought."

While enrollment in the private option has surged beyond state officials' expectations, the number of Arkansans covered by non-Medicaid exchange plans has increased since last October by less than 7,000.

The expansion of the state's Medicaid program in 2014 extended coverage to adults with incomes of up to 138 percent of the federal poverty level: $16,394 for an individual, for instance, or $33,534 for a family of four.

Federal tax-credit subsidies are available to those who don't qualify for Medicaid and have incomes below 400 percent of the poverty level: $47,520 for an individual or $97,200 for a family of four.

To promote enrollment this year the Arkansas Health Insurance Marketplace plans to conduct a marketing campaign that will include television commercials, direct mail and messages on social media platforms, a spokesman for the agency has said.

The agency plans to pay $550,000 to two organizations that employ 15 outreach workers, known as "navigators," to provide one-on-one help with enrollment.

Under a contract with the marketplace, operators with an Arkansas Foundation for Medical Care call center will answer questions from consumers about their choices.

Created by the state Legislature in 2013, the marketplace established an exchange for small business employees last year and is taking over responsibility for the exchange for individual consumers this year.