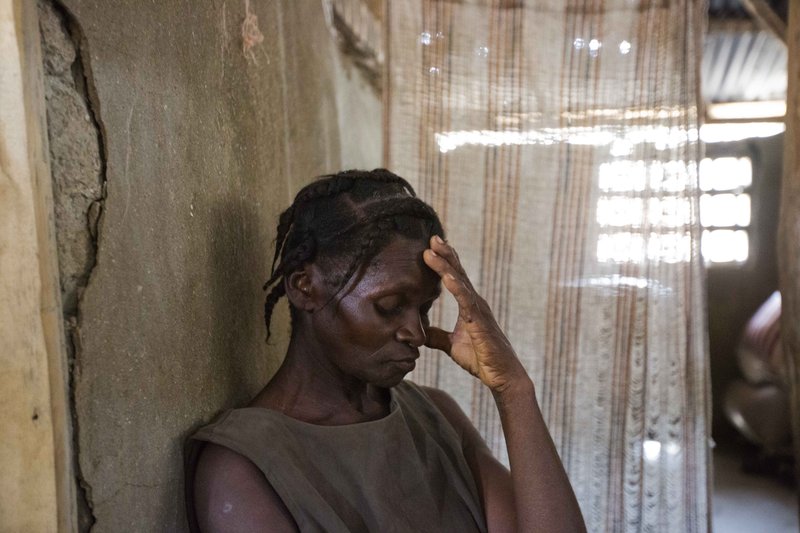 Bertha Mesilier leans Tuesday against a wall in the room she shared with her now missing husband Edma Desravine, who was last seen seeking refuge from the heavy rainfall and winds brought by Hurricane Matthew, in Port-a-Piment, a district of Les Cayes, Haiti. Family and neighbors near the town of Port-a-Piment have dug by hand through wreckage and scoured the riverbanks, but to no avail.

PORT-A-PIMENT, Haiti -- Hopes have dimmed for Haitians combing the countryside for missing relatives roughly 2½ weeks since Hurricane Matthew sent floodwaters and debris over parts of the country.

The central government says the official toll stands at 546 dead and 128 missing, but many believe that the figures could be higher, and some rugged areas still have not been fully assessed.

While relief can often be slow and chaotic in disasters around the world, the Western Hemisphere's poorest and least-developed country is perennially beset by natural catastrophes and particularly ill-equipped to handle them.

In crucial first days, assistance is often too little and too late, stalled by impassable roads, collapsed bridges and a lack of resources and infrastructure. Communications were wiped out by Matthew in large parts of the southwest, with no emergency backup.

With Haiti's interim government taking the lead in directing relief efforts, there were no boats reaching cutoff coastal towns for days, dive crews or teams with trained search dogs looking for the missing and the dead. The U.N. stabilization mission, the U.S. government's disaster assistance response team and numerous nongovernmental organizations all said they never received any specific request from Haiti to help locate the missing in the ongoing effort to ferry emergency food, water and medical supplies.

Government personnel and an army of international aid workers are delivering more relief supplies to people, but area authorities in southwest Haiti say it is falling short of meeting desperate needs.

Interior Ministry spokesman Guillaume Albert Moleon said the government has the situation under control. He praised teams of civil protection officials and volunteers who are reaching marooned rural communities and said authorities are methodically keeping track of the dead and helping the living.

"There's so much to accomplish," Moleon said.

Officials said with no heavy equipment to move debris or other resources, they were powerless to help frantic relatives searching for loved ones or care for the injured.

Germa Mazile Celestin, a senior civil protection official in the fishing town of Coteaux, said municipal authorities helped bury 22 storm victims and made an effort to help find the area's two missing people: a 72-year-old man and an 89-year-old woman. But she conceded it wasn't much.

"The little that we did was indeed very little because we just don't have the resources," she said at her home, one of the few in town that still has a roof.

Mayor Jean Gabriel Fortune of Les Cayes, the largest city in the southwest, asserted there are no accurate numbers for the missing and dead and he suspects some towns may be reporting higher figures to attract foreign aid.

"I do think there are Haitians who are boosting numbers with the objective of attracting this relief they have heard about but are not benefiting from," Fortune said. "And I also know that when central government officials claim they have things under control, they don't know what they're talking about."

Days after Haiti's devastating earthquake in 2010, the government issued wildly conflicting death tolls, adding to confusion about how many people actually died and to suspicions that nobody really knew.

Weeks later the official count was raised from over 200,000 to some 316,000 dead just ahead of a U.N. donor conference, without clear explanation of how it got there.

Authorities say it remains far from clear whether all 128 people said to be missing from Hurricane Matthew were in fact in areas ravaged by the Category 4 storm. One man in Les Cayes reported his wife and two children as missing, but according to Fortune, neighbors said the woman and her kids had taken a bus to the capital, using the storm as an opportunity to leave an unhappy home.

Edma Desravine, the missing grandfather, is one of 10 people who vanished from the foothills across a rushing river from Port-a-Piment when Matthew roared through.

His family and other villagers have been walking by a woman's corpse for two weeks, averting their eyes and covering their noses and mouths with shirttails to try to filter out the stench. Officials said they have no idea whether the body has been included in the town's official death toll, or simply has yet to be tended to.

"I hope her family will come down from the mountains and put her in a coffin," Bernadette Desravine said outside the family's damaged shack, built in harm's way near a riverbed. "I wish our family had that luck."