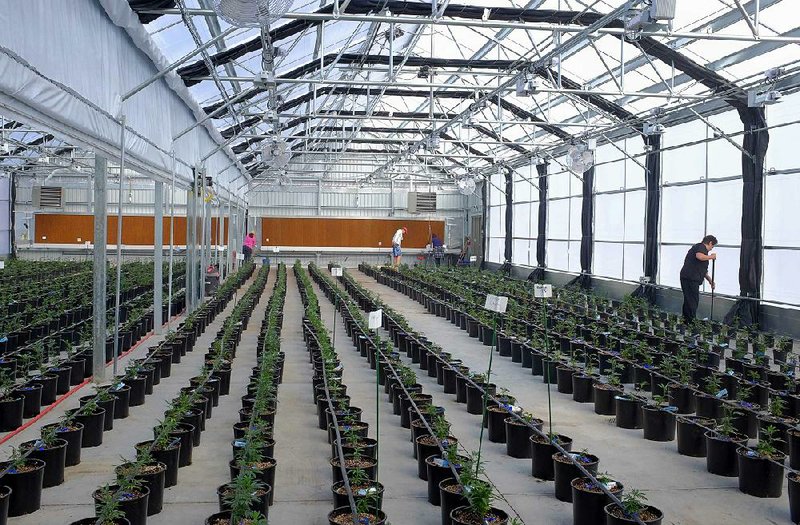 Marijuana plants grow in a greenhouse at Los Suenos Farms in Avondale, Colo., earlier this year. Scotts Miracle-Gro’s stock is getting a boost from marijuana proposals in several states, with one analyst saying Scotts is seen as a “marijuana growth story.” (Bloomberg News / MATTHEW STAVER )

The Arkansas Supreme Court has disqualified a medical marijuana proposal from the November ballot, but voters will still be able to consider a competing plan.

The court found that sponsors of Issue 7, known as the Arkansas Medical Cannabis Act, failed to obtain the necessary amount of signatures for the proposal to qualify.

Opponents challenged the ballot initiative, which would have allowed medical marijuana use as well as permit users to grow their own if it's unavailable otherwise, on the grounds that many of the signatures sponsors collected from Arkansas citizens were invalid.

In the ruling, Justice Karen R. Baker wrote the “total number of signatures which should have been counted by respondent falls below the statutory minimum.”

Baker explained that to have an initiative appear on the ballot, sponsors need to submit valid signatures from 8 percent of the voters in the last gubernatorial general election, or roughly 67,887.

How will you vote on Issue 6, the Arkansas Medical Marijuana Amendment? 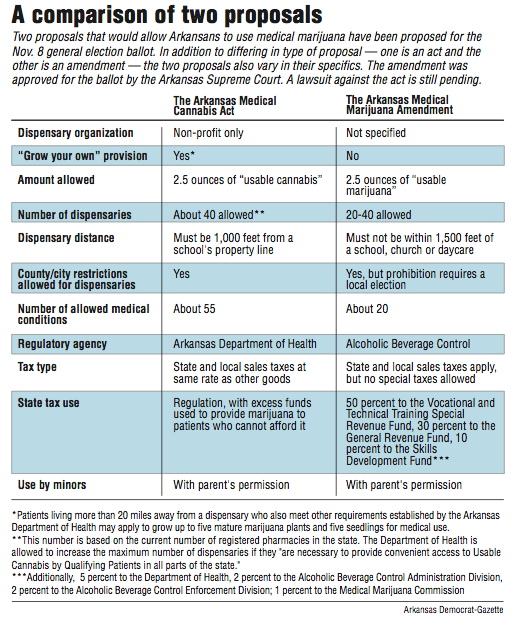 After reviewing the case, the court ultimately said roughly 12,104 were invalid, leaving approximately 65,412 valid signatures, which is 2,465 less than the necessary amount to “satisfy our constitutional requirements,” Baker wrote.

“This position treats this matter solely as a factual one, evades the applicable law, and is not supported by decades of precedent regarding statutory interpretation,” Baker wrote.

She added that the court has "simply interpreted the laws enacted by our General Assembly.”

In a dissent, Chief Justice Howard W. Brill said he believes the act "should remain on the ballot."

"While the sponsor's canvassers did make some errors in the signature-gathering process, I agree with the master's findings that these errors are not a complete failure with regard to the sufficiency of the signatures on the petition," Brill wrote.

In a concurring opinion, Justice Courtney Hudson Goodson agreed with the legal basis for disqualifying the ballot measure but noted that "the General Assembly has made it unduly difficult for measures to be placed on the ballot."

"The petition here failed to satisfy the onerous demands of the Act, even though there is no allegation that the signatures were invalid in any other way," she wrote. "The result is that the wishes of the citizens who signed the petition in good faith are being discarded, and the right of the people to pass judgment on the proposal in the voting booth has been lost."

Arkansas Surgeon General Greg Bledsoe, who serves as a spokesman for Arkansans Against Legalized Marijuana, said he respects the court’s decision, but would have preferred for the issue to remain on the ballot for voters to have their say. The lawsuit against Issue 7 was not brought by his group, Bledsoe said.

The surgeon general said he empathizes with the initiative proponents’ “passion and frustration” even if he disagrees with them on the medicinal benefits of marijuana in its current form. Disqualifying the ballot initiative 12 days before the vote could be “disillusioning” to people who wanted their voices to be heard, he said.

“It furthers this narrative that the government isn’t working for us and it undermines, in their minds, the process,” Bledsoe said.

Earlier this month, the court upheld a second medical-marijuana initiative, the Arkansas Medical Marijuana Amendment, so voters will still decide on that issue come election day.

Arkansans for Compassionate Care said in a news release the group would continue to fight the decision, but urged citizens to vote “yes” on the still-standing medical-marijuana amendment and also mark their vote on Issue 7, saying the priority is that “patients have safe access to medical cannabis.”

“We will keep fighting [to] ensure that no patient faces arrest for using a safe and effective medicine, whether that protection comes from Issue 6 or Issue 7,” said Deputy Director Ryan Denham in the release.

Arkansas voters narrowly rejected legalizing medical marijuana four years ago. Advocates had cast the proposals as a way to prove there's support for medical marijuana, even in conservative states.