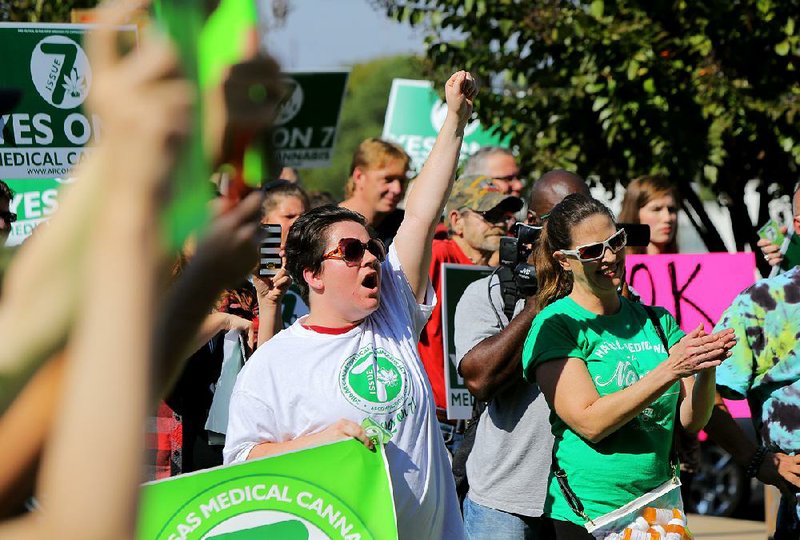 Supporters of the Arkansas Medical Cannabis Act, also known as Issue 7, cheer a speaker during a rally Friday outside the Arkansas Supreme Court in Little Rock. ( Arkansas Democrat-Gazette / Stephen B. Thornton)

Medical-marijuana supporters invoked Donald Trump's allegations of a rigged election as they rallied outside the state Supreme Court on Friday. 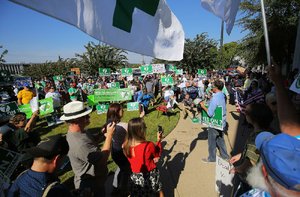 Photo by Stephen B. Thornton
Supporters of the Arkansas Medical Cannabis Act gather Friday for a rally outside the Arkansas Supreme Court after Thursday’s ruling that voided votes on the measure.
Reader Vote Results

How will you vote on Issue 6, the Arkansas Medical Marijuana Amendment?

The protest, which about 250 people attended, was focused on a 5-2 decision Thursday in which justices decided that votes would not count for the Arkansas Medical Cannabis Act because supporters did not gather the minimum number of signatures required.

The court's decision came on the fourth day of early voting. More than 144,000 people had already voted -- more than 8 percent of registered voters -- ahead of the Nov. 8 general election. Those who voted cannot redo their votes in light of the ruling. Because the ballots are already printed, the court ordered that votes not be counted.

"Trump's right when he says that it's corrupt. Something's wrong with the system," Angela Howell of Little Rock said of the Republican presidential candidate as she stood outside the state Supreme Court with an Issue 7 sign. "That No. 6 puts the government is control. The government is in control of enough, and enough's gone downhill because the government's in control."

As Howell spoke, Abel Tomlinson, Fayetteville director of Arkansans for Compassionate Care, took hold of a megaphone and called for the crowd to boo Gov. Asa Hutchinson, Arkansas Surgeon General Greg Bledsoe and the five Supreme Court justices who voted to invalidate the signatures.

"I'm not much of a Trump supporter, but this feels pretty rigged to me," Tomlinson said. "This is an attack on democracy."

Protesters cheered Chief Justice Howard Brill, who wrote a dissenting opinion, and Justice Paul Danielson, who signed on to it.

Justice Courtney Goodson concurred with the majority but wrote that Act 1413 of 2013 "impermissibly impinges on the constitutional right of our citizens to propose laws and amendments to the Arkansas Constitution."

The law placed tighter regulations on the petition procedure that allows Arkansans to directly pass laws and bypass the Legislature.

Sen. Keith Ingram, D-West Memphis, said he sponsored the bill after allegations of fraud in a past ballot-measure campaign. He said the law was intended to deal with paid canvassers, not local volunteers.

"This was a response to try to bring some type of order to something that's very serious," he said. "Amending the constitution is a very serious thing and it should be held at a very high level."

Melissa Fults, campaign director for Arkansans for Compassionate Care, told the crowd that lawmakers had changed the petition-gathering law to stop groups from putting amendments and initiated acts on the ballot.

"[T]hat's certainly true," Couch said on Twitter of her comments. He argued against Act 1413 before the Supreme Court in 2015. The high court ended up reinstating most of the law, overruling a Pulaski County circuit judge who had previously ruled it unconstitutional.

Fults, who also is running for a seat in the Arkansas House, vowed to work to change the law if elected.

Section 21 of the Act 1413 set standards for paid canvassers. Under that section, sponsors cannot provide money or "anything of value" to a canvasser unless he meets the requirements, which include providing his full name, current home address and a photograph.

Justice Karen Baker, who wrote Thursday's majority opinion, said because some of the petitioners on the paid list had not met all of their required qualifications, the court had no choice but to throw out 7,580 signatures.

"Today, we have simply interpreted the laws enacted by our General Assembly -- 'shall' means 'shall' and the Sponsor did not comply with the statutes," Baker wrote.

But in his dissent, Brill quoted Fults, who said that most on the paid list had not been paid.

"And at one point, we thought we were going to get a donation. And so several said, 'Yeah, put me on the list to be a paid canvasser.' And when we didn't get the money, they said, 'Well, I'd rather just be a volunteer anyway.'"

Issue 7 was the only ballot measure approved by Secretary of State Mark Martin's office with the majority of signatures collected by volunteers. The backers of Issue 6 spent more than $500,000 to pay people to circulate petitions and gather the signatures needed to place the amendment on the ballot.

Fults said lawyers have volunteered to file a writ of mandamus with a federal court. If granted, the federal court order would compel lower-court officials to properly fulfill their official duties or correct an abuse of discretion.

She has cited a passage from the state constitution:

"If the sufficiency of any petition is challenged such cause shall be a preference cause and shall be tried at once, but the failure of the courts to decide prior to the election as to the sufficiency of any such petition, shall not prevent the question from being placed upon the ballot at the election named in such petition, nor militate against the validity of such measure, if it shall have been approved by a vote of the people."

She said the legal matter was "bigger than Issue 7."

"Have they hurt us? Yes. Have they probably broke us this time around? Very possibly. But if they think for one second that we're going to stop and let them do this to anybody else -- or do it to us the next time -- they are sadly, sadly mistaken."

The lawsuit that ultimately disqualified Issue 7 was filed by Kara Benca, a Little Rock-based lawyer. Her husband, Patrick Benca, served as her lawyer in the complaint to the state Supreme Court.

Couch provided research for the lawsuit.

"I have not submitted a bill to [Couch] yet, but I plan to," Patrick Benca said in an interview Thursday. "It would just be my normal rate to handle that hearing and to handle the appeal to the Supreme Court."

On Friday, Couch said he would not be paying such a bill, but it's possible financial backers of the proposed amendment would do so.

Cheney Pruett, chief executive of lending business CashMax, and Bevans Family Trust, which owns Lake Liquor in Maumelle, are the amendment's two financial backers. They have contributed more than $885,000.

Patrick Benca said: "Hopefully, down the road, our goal is what [Issue 7] is. We hope there is a self-grow aspect of it. I mean, we're not trying to say that we shouldn't have a self-grow aspect to it. It was just that the voters didn't like it right now. Do I think two years from now, they'll be more inclined for allowing that, sure, I think they will, but now is not the time."

Couch said the General Assembly would have the ability to add a grow-your-own provision, but that was the first he'd heard of such a plan.

"It would be a overwhelming, expensive process to do another constitutional amendment, to just add that in there," he said. "I don't think it would be economically feasible."

Couch worked with Fults on a proposed 2012 medical-marijuana measure that fell just short of approval by voters in that year's general election. After the 2012 election, the two split over a "grow-your-own" provision, and they pursued separate proposals for this election year. Issue 7 would have allowed users to grow their own, under certain conditions.

"I just want people to know that 12 days before an election, I would have preferred the voters to have a say, but obviously the big marijuana folks from Issue 6 had other plans and inserted themselves into this," he said.

He said he was not opposed to components of marijuana being used as medicine, as they are in a television commercial supporting Issue 6. The TV spot stars a mother who feeds cannabidiol to her young daughter, who has seizures.

He expressed support for draft legislation by Rep. Dan Douglas, R-Bentonville, that would allow doctors to prescribe certain strains of marijuana containing low volumes of tetrahydrocannabinol, or THC, and higher concentrations of cannabidiol. Bledsoe also said he would need to study the legislation further.

Douglas said that if voters rejected Issue 6 and Issue 7, he would offer the legislation in the legislative session that starts in January.