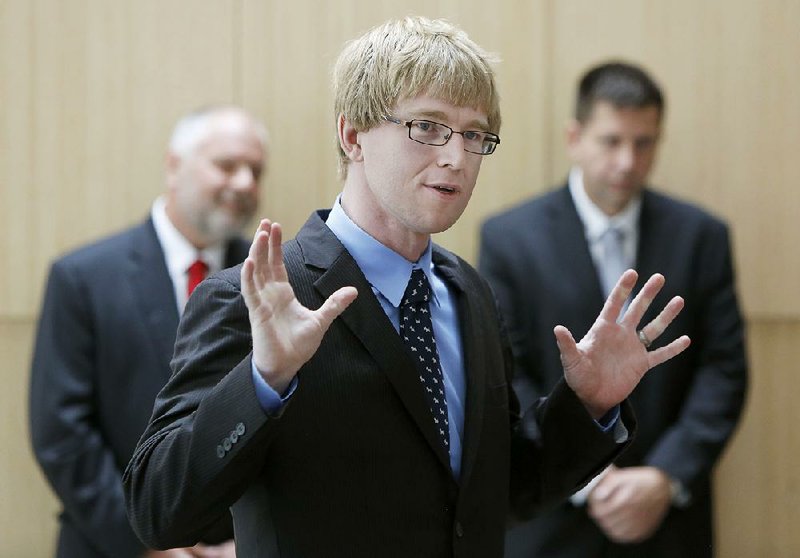 Picasolar chief executive Douglas Hutchings, announces Wednesday in Fayetteville that his company has been awarded $2 million to continue work on solar-cell technology. He is with Jim Rankin, (left) a vice provost at the University of Arkansas, and Sergiu Pop of Yingli Green Energy Americas.

Picasolar Inc. in Fayetteville received a $2 million award from the U.S. Department of Energy to move forward with a pilot manufacturing program for the company’s solar-cell technology, the company announced Wednesday.

Picasolar and its sister company, Silicon Solar Solutions, developed a hydrogen-selective emitter that improves the top layer of a solar cell, making it up to 15 percent more efficient as well as lowering manufacturing costs by reducing the need for silver.

The award is the company’s third round of grants from the Energy Department’s SunShot incubator program, something Picasolar CEO and founder Douglas Hutchings said was a first for any of the companies participating.

He noted that some doubted the startup’s ability to develop and improve its technology in Arkansas, a place not known for kick-starting technology. He said he was proud to work with those who never doubted the company could thrive in Arkansas.

Sergiu Pop, director of research and development with Yingli Green Energy Americas, said the company would work with Picasolar on the project to bring its technology to market. Based in China, Yingli has 30 branch offices and subsidiaries around the globe and is one of the world’s largest solar panelmakers.

“This technology will give us a clear advantage over our competition,” he said.

The $2 million Energy Department grant will be matched by $2 million in investment by Picasolar.

The emitter was invented by Seth Shumate, the company’s chief technology officer, who earned his doctorate at the University of Arkansas.

The company was founded in 2008. It employs nine workers, with eight of those UA graduates, including Hutchings.

Hutchings said he hopes over the next year to hire up to five more employees with expertise in mechanical engineering.

In 2014, the company obtained equity investment valued at $1.2 million, including $600,000 from private investors, along with a dollar-fordollar match from the Arkansas Development Finance Authority. Earlier that year, Picasolar received an $800,000 award from the Energy Department.

Picasolar’s operations are at the University of Arkansas’ Research and Technology Park, where the company has office and laboratory space. Picasolar moved into larger offices at the park last year.