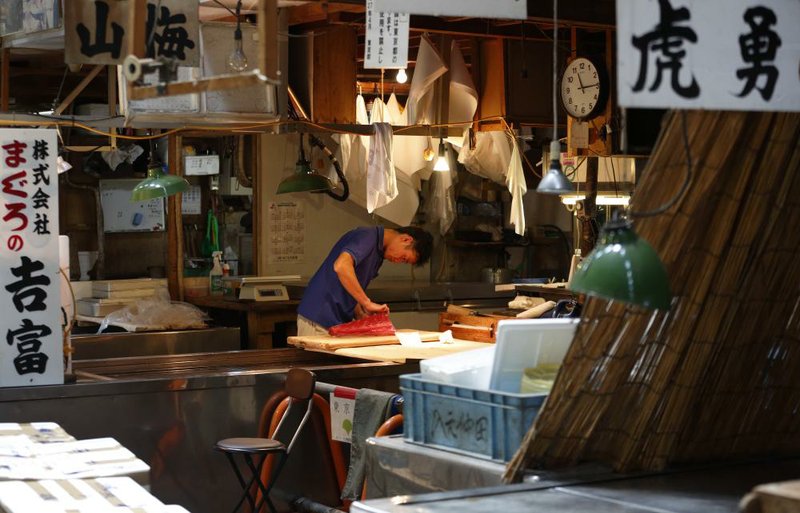 A fishmonger checks a tuna at the Tsukiji fi sh market in Tokyo last week.

The culling of Tokyo's iconic Tsukiji fish market -- the site of world-renowned early morning tuna auctions -- has been postponed indefinitely.

The 81-year-old market's future had been in murky waters since 2001, when the city's government decided to move it to a site on reclaimed land in the Toyosu region near Tokyo Bay. The relocation plan was delayed as contaminated soil had to be removed from the new site -- a process that was completed in October 2014.

Less than a month after she took office, Tokyo Gov. Yuriko Koike announced a further delay on Aug. 31. She said she would set up a project team to look into the move, citing concerns over the safety of the new site and the cost of relocation. She gave no indication of when the team would announce the results of its inquiry.

"Construction costs had ballooned," Koike told reporters in Tokyo, saying she was "astonished" at the $5.7 billion price tag of the relocation. "As the person who receives the important tax payments of the Tokyo public, I wondered why this was. I have to find out whether this is justified."

The move had been set to take place on Nov. 7. Any further delays may affect construction of roads linking the city center with the planned site for the Olympic village for the 2020 Tokyo Games.

"The delay might hinder the development boom in the Toyosu region," says Takashi Ishizawa, a senior researcher at Mizuho Securities, referring to the area chosen as a site for the Olympics that recently saw a construction boom. "Apartment construction was overheated. However, the redevelopment plan for the area will probably not be scrapped."

The relocation delay is another headache for the Tokyo government, which has had numerous problems as it gets ready for the 2020 Olympics. The original plan for the main stadium was scrapped after costs ballooned, and the official logo had to be re-selected after allegations of plagiarism. French prosecutors are also probing the bidding process for the games.

Tsukiji fish market is listed among popular tourist destinations by the Japan National Tourism Organization. Dubbed the world's biggest marine product market, locals and tourists visit the site for fresh sushi and seafood -- as well as to view the tuna auctions held at the crack of dawn.

Information for this article was contributed by Katsuyo Kuwako of Bloomberg News.