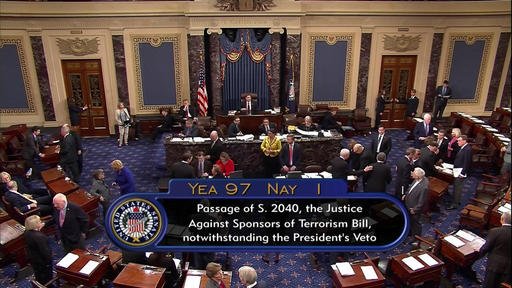 This frame grab from video provided by C-SPAN2, shows the floor of the Senate on Capitol Hill in Washington on Wednesday, Sept. 28, 2016, as the Senate acted decisively to override President Barack Obama's veto of Sept. 11 legislation, setting the stage for the contentious bill to become law despite flaws that Obama and top Pentagon officials warn could put U.S. troops and interests at risk.

WASHINGTON — Congress voted Wednesday to allow families of Sept. 11 victims to sue Saudi Arabia for its alleged backing of the attackers, handing Barack Obama the first veto override of his presidency.

Both the House and Senate voted decisively to reverse Obama's decision to scuttle the legislation. Democrats in both chambers abandoned the president in large numbers despite warnings from Obama and top national security officials that flaws in the bill could put U.S. interests, troops, and intelligence personnel at risk.

Lawmakers said their priority was the 9/11 victims and their families, not Saudi Arabia.

Speaking at a forum in Washington, CIA Director John Brennan said he was concerned about how Saudi Arabia, a key U.S. ally in the Middle East, would interpret the bill. He said the Saudis provide significant amounts of information to the U.S. to help foil extremist plots.

"It would an absolute shame if this legislation, in any way, influenced the Saudi willingness to continue to be among our best counterterrorism partners," Brennan said.

Brennan, who said he visited lawmakers Wednesday to argue against an override of Obama's veto, noted that there is a tremendous amount of Saudi investment in the United States. "Do they want to leave them here so they could potentially be attached by some type of court ruling that is going to award the litigants?" he asked.

After senators acted, White House spokesman Josh Earnest called the vote the "single most embarrassing thing" the Senate has done in decades and "an abdication" of its responsibility. He accused members of the Senate Judiciary Committee of not understanding the legislation and its impact on the military.

The legislation gives victims' families the right to sue in U.S. court for any role that elements of the Saudi government may have played in the 2001 attacks. Fifteen of the 19 Sept. 11 hijackers were Saudis. Courts would be permitted to waive a claim of foreign sovereign immunity when an act of terrorism occurred inside U.S. borders, according to the terms of the bill.

Should the families of 9/11 victims be allowed to sue the government of Saudi Arabia?