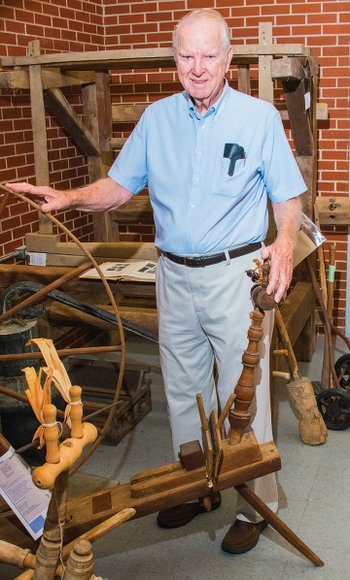 Charles Stuart, president of the Cleburne County Historical Society, discusses some of the pioneer tools that are on display in the society’s museum. The historical society moved into the old Heber Springs post office in March and set up this exhibit in an area that was once the loading dock for the post office.

HEBER SPRINGS — The recent move of the Cleburne County Historical Society to the old Heber Springs post office building might be said to be a prime example of how the society is preserving the history of the county.

“The county bought it and held district court here and housed other agencies that we don’t know all the details about,” Stuart said. “Four years ago, they built a new court building and abandoned this building.

“We formed a partnership with the county to create a Cleburne County Historical Center, if you will, and moved here in March.”

Mickey Barnett, vice president of the historical society, said, “We have expanded our space by at least 10 times, and we have a full basement under us.

“It’s been a job to move here. … It borders on being work,” Barnett said, laughing.

Stuart said Greg Hutto, supervisor of the Cleburne County Maintenance Department, was instrumental in procuring workers to help move the Historical Society from its former site, the historic Frauenthal House at

210 N. Broadway in Heber Springs. Max Frauenthal, who is called “the father of Heber Springs and Cleburne County,” built the house for his son, Clarence. The historical society still owns the Craftsman-style house, which is on the National Register of Historic Places; Stuart said the future of the house has not been decided.

The Cleburne County Historical Society operates a historical museum, as well as a genealogy research library in its new location, as the society did at its former location. The site is open to the public from 10 a.m. to 3 p.m.

Tuesday through Saturday and by appointment. There is no admission fee.

One of the most noticeable exhibits in the museum is the original post office mural — Mural of the Ozarks: From Timber to Agriculture — painted in 1939 by H. Louis Freund. The U.S. Treasury Department’s Section of Painting and Sculpture, later known as the Section of Fine Arts, commissioned the oil-on-canvas painting.

“The Cleburne County Courthouse has never burned, but we hope to act as an alternative source for records just in case. We already have digitized old real estate tax record books and hope to digitize other records as soon as we can, using volunteers when they are available,” he said.

“We have more space and more displays in our new location,” Stuart said. “We have been anticipating this move for the past four or five years, and we have been collecting things since then, turning nothing down that people wanted to donate to us.

“We are out of space already.”

Stuart said there is always a lot of maintenance work that is required for the upkeep of an old building such as the old post office.

“Now that we’ve got some of those issues under control, we are getting more settled into our new space,” he said. “We will have an open house in the near future.”

Visitors enter the side entrance to the museum off First Street. Among the first things they see are portraits of Gen. Patrick Ronayne Cleburne and Max Frauenthal. Cleburne, who was born in Ireland, immigrated to the United States in 1849 and settled in Helena. He was a confederate colonel in the Civil War and is the namesake for Cleburne County, which was created as Arkansas’ 75th county in 1883.

There is also information on Wesley Watkins, who was the first mayor of Heber Springs, which was first called Sugar Loaf.

Among the exhibits at the museum are the following:

• Information on building the Greers Ferry Dam and Lake;

Stuart said one of the newest items on exhibit is a Civil War rifle that belonged to the family of A.R. Witt in Quitman.

Witt lead Company A — the Quitman Rifles — of the 10th Arkansas Infantry Regiment during the Civil War.

Another new acquisition is a doctor’s buggy that belonged to the late Louis Stecker, an early settler in the Magness community. Stuart said members of the historical society will drive the buggy, which was donated to the museum by Carolyn Sue and Bud O’Dwyer of Conway, in the Ozark Trail Festival Parade at 11 a.m. Oct. 8 from downtown Heber Springs to Spring Park.

Among the records available at the genealogical research library are census records for Cleburne County, transcribed from microfilm, 1860-1940; personal tax records for 1890; marriage records for 1883-1986; cemetery records for all cemeteries in Cleburne County, most updated to the late 1990s and later; burial records from Olmstead Funeral Home from 1907 through 2005; family histories; and copies of more than 18,000 obituaries from 1900-2014.

New members to the historical society are always welcome. Membership is $15 per year or $250 for a lifetime membership. Members receive quarterly issues of the Cleburne County Historical Journal and four newsletters per year.