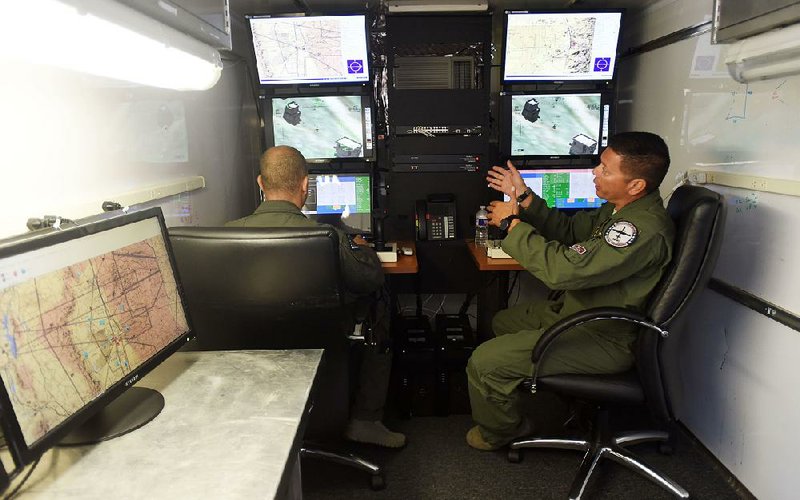 Members of the 188th Wing of the Arkansas Air National Guard use a simulator Thursday at their base in Fort Smith to demonstrate their remote-piloted role in combat missions. ( NWA Democrat-Gazette / Michael Woods)

FORT SMITH -- In the quiet absence of roaring fighter jets, two people use joysticks inside a control room to engage in combat far from U.S. shores.

Ebbing Air National Guard Base has transitioned away from fighter planes to remotely piloting drones, missile-carrying aircraft that can surveil and destroy the nation's enemies.

On Aug. 1, more than two years after the shift began, the base started operating under its new mission.

Remotely piloting an MQ-9 Reaper, a major weapon deployed against the Islamic State group in Syria and Iraq, is one of three primary tasks. Most of the time, the pilot's job is to provide real-time images for analysts to study, but occasionally they strike, commanders said Thursday during a presentation to reporters.

"We basically deploy in place, and it's constant," said Col. Bobbi Doorenbos, who took command of the Air National Guard's 188th Wing in January 2015. "Right now, we do 24/7 combat missions every day."

Doorenbos invited reporters to Ebbing on Thursday to hear a presentation on the base's progress since the Air Force adjusted its mission three years ago. She said she wanted to let the community know the new mission is "operational, unique and hiring."

News of the transition shocked Fort Smith, the state's second largest city, and some in the community feared the base, in operation since 1953, would be diminished or closed. But with the new mission, which also includes intelligence analysis and military-target development, that hasn't happened, Doorenbos said.

Employment has remained steady -- four recent new hires boosted employment at the base to 1,003, though the 316 full-time slots are two fewer than the former configuration. Doorenbos said she is trying to fill 148 openings, which include three dozen intelligence analysts and two dozen Reaper pilots.

The mission change stripped Ebbing Air National Guard Base of its planes, the A-10 Thunderbolt IIs nicknamed the "Warthogs." Gone is the sand berm that protected Fort Smith from bursts of debris stirred up by the fighters' powerful turbine engines.

In their place are specialized technology jobs, Doorenbos said. Fort Smith is one of 12 Air National Guard bases that remotely pilot aircraft, and it is the only one that also houses a center to analyze intelligence in real time.

"By integrating operations and having the aircraft flying the mission that our intel analysts are analyzing, we can all actually be in the same room," Doorenbos said. "We all know each other, which is very different than if you're typing in a chat message to somebody who you have no clue who they are."

The type of aircraft piloted from Fort Smith is the same that is used in U.S. operations against the Islamic State in Iraq and Syria. It has also been used for surveillance and airstrikes in other countries.

Officials declined to say where the aircraft controlled from Fort Smith have flown and how many missiles have been remotely fired from the base since it became operational.

The Air Force Times in March, citing Air Force data, reported that the Reaper was flown on 14 percent of all Air Force missions against ISIS, an acronym for the Islamic State, and that it had fired 4 percent of weapons released in those missions.

As of Tuesday, the U.S. had conducted 11,829 strikes in Iraq and Syria as part of Operation Inherent Resolve, according to the Department of Defense.

"The men and women of this organization are contributing to the war fight every single day," said Maj. Gen. Mark Berry, who commands the state's Air and Army National Guard. "It's hard for a lot of people to grasp that because they cannot see the active missions they are flying on a day-to-day basis, but they are taking care of business in different theaters in the world to provide for the safety and security of all citizens of the United States."

Pilots operate one MQ-9 Reaper from Ebbing at a time, for now. Doorenbos said she anticipates adding capacity for up to two more all-day, all-night Reaper operations when a new $15.9 million operations center is built, she said. Construction should be finished by 2018, said Lt. Sam Grounds, an executive officer.

The pilot sits beside a sensor operator, the person responsible for operating the camera and firing missiles, in what is called a ground control station; right now, that station is a collection of six portable trailers pushed together, Doorenbos said.

Nine monitors show a medley of information, including positioning, a high-definition picture of what the sensor is looking at and several chat boxes, which are the primary form of communication from inside the control station to supervisors, intelligence analysts and others. Some support staff and the flight supervisor are in a separate room but nearby.

"We do not call these things drones," Doorenbos said. "Drones to me say autonomous, with not a lot of human inject. Whereas remotely piloted, which is what we do, indicates there is actually a human or two or a dozen, actually, in the loop for everything that aircraft does. ... In no way is this unmanned at all."

One of the starkest changes for the base is the continual deployment. Rather than leave the country for months at a time on a deployment, the mission is always active. This means the airmen go home after work, making it difficult to separate being in a combat environment from their domestic lives.

"That can sometimes be challenging for folks," Doorenbos said. "But recognizing that, the Air Force has done a tremendous job of providing us the support that we need to deal with those issues.

Ebbing keeps a full-time chaplain and director of psychological health on staff and offers support to spouses and families, Doorenbos said.

The aircraft, which at 36 feet long with a wing span of 66 feet are similar in size to the A-10s, can carry up to four Hellfire missiles. The missiles are known for their precision and have reportedly been used in several killings of ISIS and al-Qaida leaders.

Col. Leon Dodroe, who's in charge of the remote piloting operation at Ebbing, said that 95 percent of the time, the MQ-9 Reaper's mission is to gather intelligence.

Particularly because it can stay in the air for nearly 24 hours, the Reaper is primarily used for surveillance, Doorenbos said. The volume of information collected by remote flight is "elemental" to combat, she said.

"You have to have the intelligence before you can action any kind of target, or to even know what's going on," Doorenbos said. "It is positively elemental to everything we do in theater right now."