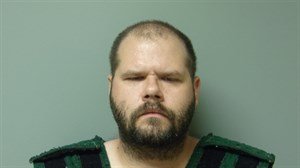 JONESBORO -- Richard Jordan Tarver knew he could survive a zombie apocalypse if only he knew what it felt like to kill someone, Deputy Prosecuting Attorney Grant DeProw said Thursday in his opening statement of Tarver's capital-murder trial in Craighead County Circuit Court.

Tarver, 31, of Bay is accused of forcing Lavinda Counce, 90, from her Bay home and into the trunk of her car July 3, 2015. Police say he drove her to a cornfield east of the Craighead County town, forced her to walk into the rows of corn and then shot her in the back of the head with a .38-caliber handgun.

Prosecutors are seeking the death penalty against Tarver in a trial that attorneys say could last three weeks.

Tarver "binge-watched" the zombie television program The Walking Dead the night of July 2, 2015, before going to sleep, DeProw said.

"He wanted to feel what it felt like to kill someone, but even Tarver doesn't believe in zombies," DeProw said. "Who is the next-best thing? A 90-year-old woman who lived alone."

DeProw said Tarver walked the 100 yards between his house and Counce's house on the July morning, and knocked on her door. When she answered, Tarver pushed her inside. He took her to the cornfield, shot her and then drove her car to Jonesboro where he left it in the parking lot of NEA Baptist Memorial Hospital on U.S. 49, DeProw said.

Randall Miller, a Jonesboro attorney representing Tarver, said his client was planning a birthday party for his daughter and was with his wife and friends at the time of Counce's death and could not have committed the slaying.

Miller said a confession by Tarver to investigators was given under duress and fear that authorities would arrest his wife and take away his daughter.

"Mr. Tarver blanked out," Miller said in his opening statement Thursday. "He was so scared he would have told them anything."

Much of testimony presented Thursday centered on a large cloth bag found in Counce's Lunsford Avenue home by family members after they reported Counce missing.

Patsy Scott, Counce's daughter, said when her mother didn't answer her telephone call the evening of July 3, she and her husband drove to Counce's home. They found Counce's car missing, and inside the house they discovered unmade beds. Counce was meticulous in making beds before leaving her home, Scott said.

The daughter also found a black bag on a chair in the living room. She thought her mother won the bag in a contest, but when she opened it she saw items that scared her. The bag contained a hammer, a hatchet, rope and a club wrapped in plastic tape.

"I can't describe the panic I had not knowing where she was," Scott testified. "I picked [the bag] up, then dropped it and started praying."

DeProw said investigators found a washcloth inside the bag that contained DNA from Tarver.

Miller said DNA found on the tools were from an unknown source -- possibly a female -- but no other DNA found in the bag matched Tarver's.

Tarver became a suspect after investigators questioned a friend of his who lived near NEA Baptist Memorial Hospital, Prosecuting Attorney Scott Ellington said.

The friend, Cory Phillips, told police Tarver walked to his home about 1 p.m. the day Counce disappeared and said he had been dropped off at the hospital to visit a friend and needed a ride home, Ellington said. The time coincided with the time on a hospital parking lot security video that showed someone leaving Counce's car and walking toward U.S. 49, Ellington said.

Asked if he knew why police were at his home, Tarver replied, "I know," DeProw said in his opening statement.

Tarver then told investigators about his obsession with zombies and told them the gun used in the slaying was in his attic, DeProw said. Detectives found a .38-caliber handgun.

"He said he had no remorse, guilt or anxiety," DeProw said of Tarver. "It meant nothing at all to him."

Miller later said Tarver thought police were questioning him about a problem he had with a police officer.

He said police did not match the ballistics of the weapon to the one used to kill Counce. However, Craighead County Coroner Toby Emerson testified Thursday that investigators did not find the .38-caliber bullet that killed Counce and officials could not compare ballistics of it to the handgun.

Testimony will resume at 9 a.m. today.

Circuit Judge Cindy Thyer said she has reserved three weeks for the trial.