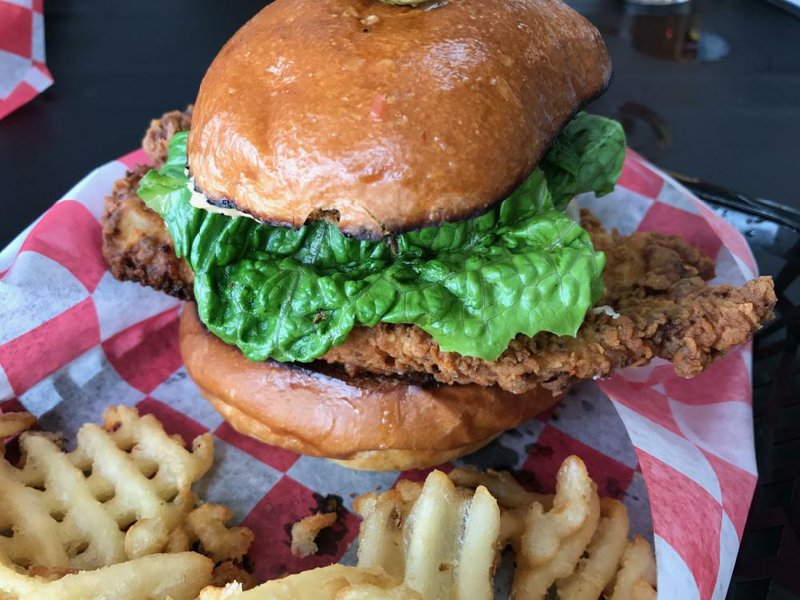 The Angry Bird chicken sandwich is a winner at North Bar.

It's a glorious sandwich, perfectly golden brown fried crust -- thin like a cracker but with a stronger, snappier breading -- enwrapping a succulent chicken breast.

The "Angry" bit comes from a "house smoked spiced sauce," similar to comeback sauce but with deeper, smokier notes balancing out the spice. The provolone cheese melts into the nooks and crannies of the chicken's crust, adding flavor, but most importantly, providing a texture to offset the breading.

The Angry Bird ($11) is a sandwich so sublimely executed that even the lettuce is not an afterthought. And it's not some measly chicken sandwich, a healthy postscript on a menu of burgers; the chicken breast extends outside the circumference of the brioche bun, which is a delightful bookend to a delightful sandwich.

And just think: Days earlier I'd vowed never to return to the newish restaurant in North Little Rock's Park Hill neighborhood after a failed attempt to even be acknowledged when walking into an already packed North Bar on a bustling Friday evening.

Mainly because I'm craving another Angry Bird, but I also want to work my way through the restaurant's list of burgers, even the five vegetarian burger options. That's how good the Green Thumb Pesto Burger ($11.50) is, with its Northern white bean patty (though it still misses that seared goodness like a properly prepared beef burger) and layers of tastes and textures, from the just-right flavor profile of pesto with balsamic onions to the firmness of the crispy lettuce.

This burger, like many at North Bar, is held together with a fresh brioche bun, the same bun that unfortunately fell apart under the messy heft of the restaurant's signature North Bar Burger ($10.50), with the excessive remoulade sauce seeping into the bun and destroying its integrity from the inside. Messy is good when it comes to burgers, but too messy -- as this burger slowly devolved into -- becomes a problem.

Still, halfway through the meal, I discarded the sopped bun and ate the tender Angus beef burger -- also topped with provolone -- alone. This tactic revealed a rich taste one finds in a perfectly executed backyard burger: It smacks of homemade craftsmanship and a well-prepared meat to fat ratio. It's juicy but not unnecessarily so. And the flavor is not of overloaded seasoning, but a slight beefiness enhanced by dashes of salt and pepper.

Co-owned by Eric Greer and Kyle Ray Dismang, who also own The Garden Bistro in North Little Rock, North Bar opened in the former Ira's Park Hill Grill space in the Lakehill Shopping Center in mid-February. It has been busy ever since, as evidenced by that terminated Friday night visit.

More than three years since Park Hill residents voted to go back to "wet," the neighborhood has embraced North Bar, but it's also quite busy because the restaurant occupies a small space, with only about a dozen two- and four-top tables and some seating around an L-shaped bar.

That bar offers wine by the glass and also martinis -- The Dirty Arkansas with Grey Goose vodka and stuffed olives is $8 -- and specialty drinks, like the Lake Hill Long Island ($8.50). Plus, there are eight beers on tap, including offerings from local breweries such as Diamond Bear, Blue Canoe, Lost Forty and Flyway. And if you're going to imbibe during a lunch meal before noon, Flyway's Bluewing Berry Wheat ($5) is a good starting point. Plus, the slight fruitiness of that beer pairs well with the tanginess of the Angry Bird.

The food menu is just a page and a half and is centered on a collection of 17 different burgers and sandwiches. Many of the burgers use the same foundation of provolone, vegetables and a brioche bun, but switch other ingredients out to create new burgers. Remove remoulade and vegetables and add bacon, peanut butter and jelly and the North Bar Burger becomes the PB&J Bacon Burger ($11).

The menu also finds room for a variety of appetizers, fish-based meals (including burgers, sandwiches and salads), and about a dozen salads and wraps. The vegetarian options here include the Hearty Grilled Veggie wrap ($10), a satisfying blend of Brussels sprouts, mushrooms, cucumber, hummus, a house vinaigrette and more in a spinach tortilla.

Jim's Catfish and Chips ($11) is one of the fish dishes, a collection of three catfish filets over a bed of waffle fries. Here, North Bar doesn't overly season the breading, which is thin and crumbly, but instead lets the slight sweetness of the flaky white fish shine.

It's an interesting take on the bottom dweller, which is ubiquitous on many Arkansas menus. Most places season the breading with pepper, salt and other seasonings, sometimes excessively, concealing the catfish's mild flavor.

Overindulgent seasoning was an issue with my Fried Brussels Sprouts appetizer ($8), which are drizzled with honey. The sprouts were ideally fried, with bits of crunchy char, but unduly salted. Maybe I just wasn't made for these salty times. The sprouts minus abundant salt showcased an earthy sweetness of leafy green and honey.

The Crispy Hummus Bites ($8), on the other hand, are a splendid creation. Hummus is not just hummus with this dish, but concocted into an appetizer more like "Middle Eastern hush puppies." The breading is faintly brittle and gives way to smooth hummus with some chunks of ground chickpea.

So, North Bar is crowded because there's demand and because it's small, sure, but also because North Bar offers inventive bar food that tastes wonderful. And, after that failed first attempt, the staff has always been faultlessly welcoming and pleasant, even though it has been busy on each visit.