Wal-Mart tests store prototype; retailer aims to compete with the likes of Amazon.com 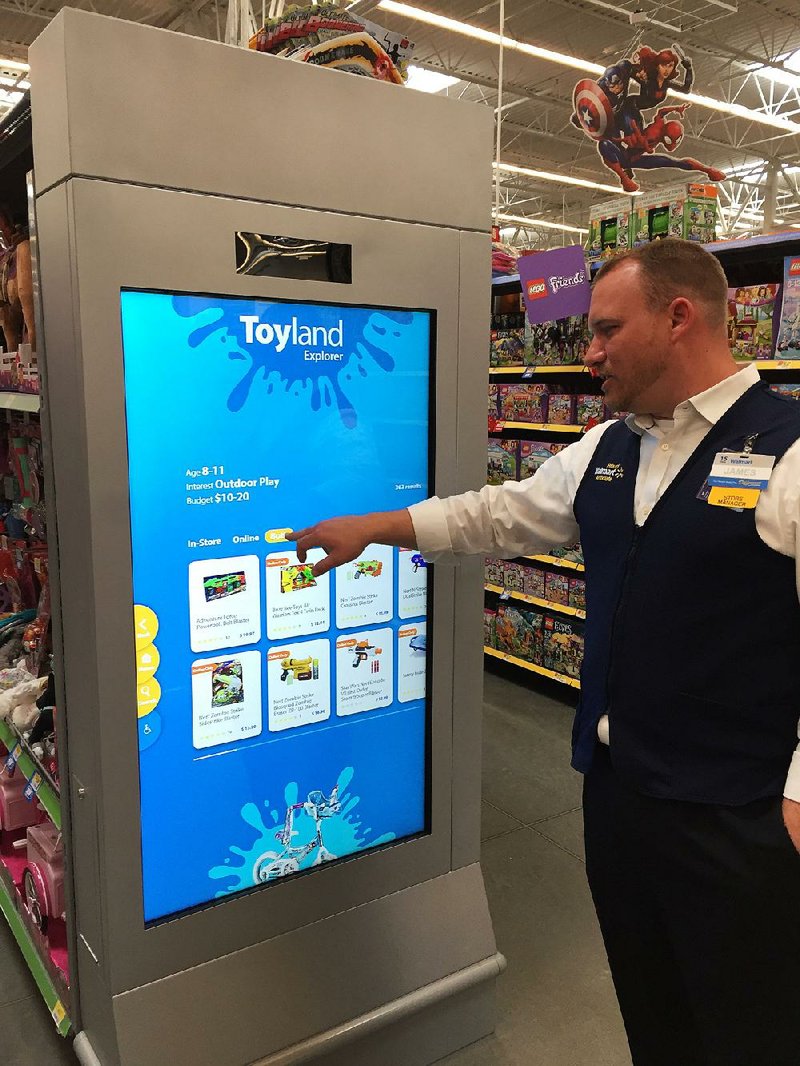 Store manager James Schroder demonstrates a large touch screen in the toy department at a Wal-Mart supercenter in Orlando, Fla. The touch screen gives customers a chance to sift through the retailer’s in-store and online catalog.

ORLANDO, Fla. — James Schroder has been answering plenty of questions from customers in the two months since Wal-Mart Stores Inc. unveiled its newest supercenter in this 7,000-acre community known as Lake Nona.

As manager of the 190,000-square-foot store promising innovative technology, an efficient layout and other customer-centric services, Schroder anticipated a flood of inquiries from curious shoppers. But he’s also confident customers are adjusting to Wal-Mart’s new digs and everything it has to offer.

“I have customers tell me all the time they can get in and out so much faster,” Schroder said during a tour last week. “Not because of anything that we’re doing differently, but because of the technology that we’ve put into the store.”

Lake Nona is one of two concept stores the retailer has opened this year along with a similar supercenter located in the Houston area. The Lake Nona store, which opened Jan. 25 and is located in a growing community within Orlando’s city limits, is being tested to determine whether the retailer will roll out the prototype at other locations across the country.

There are a few tech-based features available in the store. The most prominent is Wal-Mart’s Scan & Go, which allows customers to scan items with their mobile phones as they shop and pay for them through a mobile app to skip the checkout line. A version using a hand-held device also is available.

A Sam’s Club Scan & Go app was rolled out nationwide last year, but the two new stores — along with the supercenter in Rogers — are the only locations currently testing the Wal-Mart version.

Wal-Mart also included an interactive table in Lake Nona’s electronics department, which allows customers to swipe their hand to learn about a product. Projectors located overhead sense hand movements and determine the direction a customer wants to go in their search for information.

The store has a large touch screen in the toy department, giving customers a chance to sift through the retailer’s instore and online catalog. A series of questions — like a child’s age and gender — help narrow choices and selections are either on the store’s shelves or available online. If the selection is only available online, customers can purchase the product through the mobile app.

“The great thing about the resources we have is ability to test,” Chief Financial Officer Brett Biggs said last month during the Raymond James Institutional Investors Conference in Orlando. “That’s how I would classify those stores. A lot of what you see in Lake Nona and [the Houston area] is we’re testing how to interact with the customer differently. We’re understanding better how they want to shop.”

The tests come as Wal-Mart continues to build out its e-commerce offerings, snapping up online retailers like Jet.com, Hayneedle.com, ShoeBuy.com, Moosejaw and ModCloth in attempts to better compete with the likes of Amazon.com.

But the company’s more than 4,600 U.S. stores remain critical to Wal-Mart’s strategy with most sales still occurring in its physical locations. So as a larger percentage of shoppers turn online to purchase goods, Wal-Mart must find ways to get customers to continue making trips into those stores by offering an enhanced experience.

“There will be a lot of high tech involved and we’re definitely moving in that right direction,” said University of Arkansas associate professor Annibal Sodero, who pointed to Amazon.com’s tech-heavy Amazon Go convenience store in Seattle.

The retailer believes its enormous supercenters can help meet those expectations, providing Wal-Mart with a brick-and-mortar tool to help marry online and in-store capabilities for customers.

“We like the supercenter format, particularly in this country,” Wal-Mart Chief Executive Officer Doug McMillon told investors at the Bank of America Merrill Lynch 2017 Consumer and Retail Technology Conference in New York last month. “It’s a very effective vehicle and we believe will drive traffic over time if run well.”

In addition to the tech tools, Wal-Mart’s Lake Nona store offers a new layout intended to create a better flow.

The health and beauty section has been remodeled and is located steps away from a hair salon. The pharmacy and vision center are nearby and connected by a waiting room area for customers. Baby, kids, apparel, shoes and toys have been grouped in one area of the store and arranged by age.

An area designated for instore pickup is located just inside the front door. Outside, an integrated pickup service for general merchandise, groceries and medications is available for customers who don’t want to leave their vehicles.

The retailer provides four checkout options inside the store, including a Scan & Go fast lane for customers that is only open during the busiest hours. Most of the options in Lake Nona are self checkouts. In fact, there are only six places for registers manned by employees, which initially concerned Schroder.

“Not many of our transactions happen at the manned registers,” Schroder said. “I don’t know if they feel like taking it into their own hands will make it faster, but customers really like those options.”

“Is it a perfect Wal-Mart? No. Of course not,” the analysts wrote. “That will always be the goal — never attainable, but still sought. Was it, however, a really cool Wal-Mart? Yes, at least as we see it.”