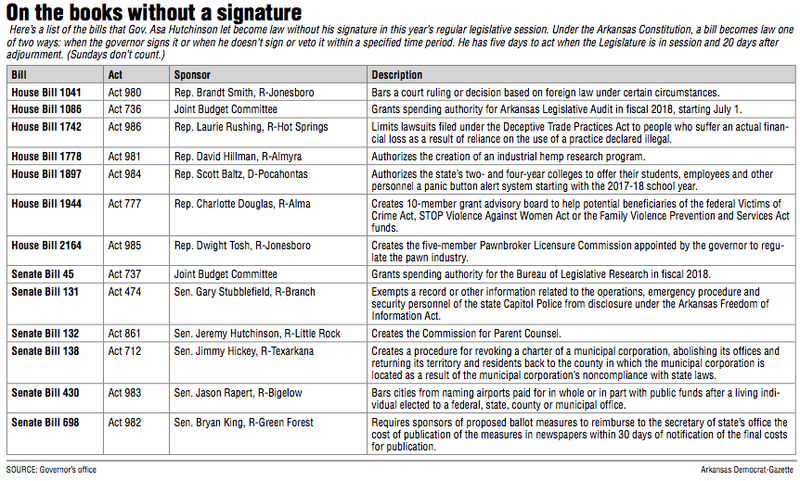 A list of the bills that Gov. Asa Hutchinson let become law without his signature

Gov. Asa Hutchinson let 13 bills become law without his signature during this year’s regular legislative session. The bills range from one authorizing the creation of an industrial hemp research program to another barring cities from naming airports after living elected government officials if those airports receive public funds.

When the Legislature sends a bill to the governor, he has three options under the Arkansas Constitution: sign it, veto all or part of it, or let it become law without his signature.

A majority vote in the 35-member Senate and 100-member House is required to override his veto, so letting a bill become law without his signature is often viewed as disapproval but short of a veto.

“I don’t approve of every bill that lands on my desk, but my disagreement doesn’t always rise to the level of a veto,” said Hutchinson.

The 91st General Assembly enacted 1,127 laws in the regular session that started Jan. 9. It is currently in recess. Hutchinson vetoed four bills approved by the Legislature, and the House rejected an attempt to override one of the vetoes.

“I am judicious in my use of the veto, which I reserve for bills I believe would be harmful to the state, such as restrictions on the freedom of expression or unnecessary expansions of state government. I may decline to sign a bill for a number of reasons — some are redundant, some unnecessary, and others may have unintended consequences,” the Republican governor said in a written statement.

The number of laws enacted without gubernatorial signatures has varied over the past two decades, according to House and Senate officials.

Hutchinson let three bills become law without his signature in the 2015 regular session — his first session as governor — according to records in the secretary of state’s office.

During the 2013 regular session, then-Gov. Mike Beebe, a Democrat, let three bills become law without his signature. The Republican-controlled Legislature overrode three of his vetoes, records in the secretary of state’s office show.

Then-Gov. Mike Huckabee, a Republican, allowed 18 bills to become law without his signature in the 1997 regular session, and the Democratic-controlled Legislature overrode 10 of his vetoes.

Among the laws enacted this year without Hutchinson’s signature are:

Under what is now Act 981, the state Plant Board will promote research and development of industrial hemp and commercial markets for those Arkansas products and may work with the University of Arkansas Division of Agriculture on industrial hemp research programs. Hemp products include certified seed for cultivation; seed, seed meal and seed oil for consumption; and cloth, cordage, fiber, food, fuel, paint, particleboard, paper and plastics.

Hutchinson said he didn’t sign the bill because the U.S. Drug Enforcement Administration “has very valid concerns that should be further studied before production of this crop in Arkansas.”

Hillman said his bill “doesn’t have anything to do with marijuana.

“Hemp is a first cousin of marijuana and has little THC. You can’t smoke hemp. You can’t get high on hemp,” Hillman said. The 2014 federal farm bill allows research on hemp in states that authorize such research; 30 states have done so. Hemp is used in a range of products, ranging from milk to lotion to making shirts, Hillman said.

“I’m looking for another crop to grow in east Arkansas,” said Hillman, who is a farmer who switched parties after the November general election.

Senate Bill 430, by Sen. Jason Rapert, R-Bigelow, is now Act 983. The law bars cities, whose airports are paid for in whole or in part with public funds, from naming those facilities after a living individual elected to a federal, state, county or municipal office.

The law won’t apply to an airport named after an individual living when the airport was completed and that has historic significance, such as being in the city where an individual was born; a current or former prisoner of war; or a retired person who is at least 75. It also won’t apply if funding is at least 50 percent private.

Hutchinson said he didn’t sign the bill “because decisions on the naming of public facilities are normally not dictated by state law when the facility is owned by local government.”

Rapert said it doesn’t matter that the governor didn’t sign the bill. He said his bill cured an oversight in a 2013 ethics law.

Rapert’s bill originally was aimed at requiring the Little Rock Municipal Airport Commission to change the name of the Bill and Hillary Clinton National Airport/Adams Field, but he axed that part of the bill to win legislative approval for the measure.

House Bill 1041 by Rep. Brandt Smith, R-Jonesboro, is now Act 980. It bars a court ruling or decision based in whole or in part on any foreign law, legal code or system that does not grant the affected parties at least one of eight rights, liberties and privileges granted under the state or U.S. constitutions.

“I allowed this to become law without signature because from my experience it is unnecessary,” Hutchinson said. “While well-intentioned and perhaps harmless, it is not a demonstrated problem in our Arkansas court system.”

Smith said the governor “and I did not see eye to eye on the bill.

“He could have vetoed it, so I’m proud he let it become law,” he said. “In all reality, it will deal with Sharia law, along with other foreign laws.”

One of the governor’s nephews sponsored a law enacted without a signature.

Gov. Hutchinson said, “While I support the intent of this bill to create a parent counsel independent of the court, the method of appointment to the commission may violate the separation of powers doctrine of the Arkansas Constitution.”

Under Act 861, the governor appoints three members of the seven-member commission; the chief justice of the state Supreme Court appoints two members; and the House speaker and Senate president pro tempore each appoint a member.

Sen. Hutchinson said he understands the governor’s concern. “I don’t know it will ever be challenged, and, if it is, we’ll find a way to fix it.”

Both Hutchinsons are attorneys.

Senate Bill 131, by Sen. Gary Stubblefield, R-Branch, is now Act 474. The law was proposed by Republican Secretary of State Mark Martin and opposed by media representatives.

It exempts a record or other information related to the operations, emergency procedures and security personnel of the state Capitol Police from disclosure under the Arkansas Freedom of Information Act.

“I did not sign this bill because although I agree with its intent to protect security information for state Capitol Police, it is vague in its language such as ‘records … that upon release could reasonably be expected to be detrimental to the public safety,’” Gov. Hutchinson said. “This vague language provides too much discretion in its interpretation.”

The governor “did not communicate his reasons to our office,” said Chris Powell, Martin’s spokesman. “We are not concerned with how it became law. Our police officers are more concerned with doing their jobs and protecting the security of the Capitol.”

House Bill 2164, by Rep. Dwight Tosh, R-Jonesboro, is now Act 985. The pawnbroker industry won legislative approval of a bill that would create a five-member Pawnbroker Licensure Commission appointed to regulate the industry.

“While I am supportive of pawnbrokers as a business and service, this regulatory framework creates additional layers of government,” Hutchinson said.

Tosh could not be reached for comment by telephone for the past two weeks.

Act 985 will require the commission to issue rules to ensure that the interest charged on a transaction is designed as an annual percentage rate that “shall not exceed” the constitutional limit of 17 percent of the amount financed each year.

The commission also will be required to issue rules under which “a pawnbroker may charge a pawn service charge that is reasonably justifiable for the burden of all services related to the maintenance of the security in the pawnbroker’s possession, including storing, insuring and investigating the title of the security.” The law will limit the total service charge to a maximum of 25 percent of the amount financed for each 30-day period, and entitle a pawnbroker to receive a minimum $5 charge for each 15-day period.

House Bill 1742, by Rep. Laurie Rushing, R-Hot Springs, is now Act 986. The law will limit lawsuits filed under the Deceptive Trade Practices Act to people who suffer an actual financial loss as a result of reliance on the use of a practice declared illegal. A private class-action lawsuit is prohibited under the Deceptive Trade Practices Act unless the claim is being asserted for a violation of Amendment 89 of the Arkansas Constitution.

“I did not sign this bill because it requires the attorney general to be the sole source of remedy in deceptive trade practices cases, which leaves questions in its ability to be a workable solution,” Hutchinson said.

Rushing said, “I am just glad he didn’t veto it.”

She said she believes that consumers would benefit from class-action lawsuits filed by the attorney general’s office.

Two bills become law that grant spending authority for Arkansas Legislative Audit and the Bureau of Legislative Research in the fiscal year that starts July 1.

Hutchinson said the two bills include special language that allow Legislative Audit and the Bureau of Legislative Research “to hire outside counsel without the usual checks and balances of the attorney general’s approval and the governor’s approval, as is required for other state agencies.”

Marty Garrity, director of the Bureau of Legislative Research, said, “As a legislative agency rather than a state agency, the provision requiring approval by the executive branch over a legislative branch agency that acts on behalf of the General Assembly poses questions of separation of powers.

“That being said, the bureau has relied upon the AG to represent us in the past, and we are currently being represented by the AG’s office. We hope to continue to rely on the AG’s office to provide legal representation, but there may be an occasion during which the bureau would need to hire outside counsel,” she said in a written statement.

House Bill 1897, by Rep. Scott Baltz, D-Pocahontas, will allow two- and four-year colleges to offer a panic button alert system starting with the 2017-18 school year. It’s now Act 984. “Decisions and funding for higher education security should be made by the institutions,” Hutchinson said.

House Bill 1944, by Rep. Charlotte Douglas, R-Alma, will create a 10-member grant advisory board to help potential beneficiaries of federal funds related to domestic violence prevention. It’s now Act 777. Hutchinson said “it creates an unnecessary advisory-only board similar to other boards that have been eliminated in the past two years.”

Senate Bill 138, by Hickey, will create a procedure for revoking a charter of a municipal corporation and returning its territory and residents back to the county in which the corporation is located as a result of its noncompliance with state laws. It’s now Act 712.

Hickey said, “There would be a whole bunch of hoops to jump through,” before the Legislative Joint Auditing Committee would consider suggesting that the attorney general pursue asking a judge to revoke the charters of cities that have repeated problems cited by auditors.

Senate Bill 698, by Sen. Bryan King, R-Green Forest, will require sponsors of proposed ballot measures to reimburse the secretary of state’s office for the cost of publishing the proposals in newspapers. Act 982 will require the reimbursement within 30 days of notification of the final costs.

“It increases the costs for citizens who initiate ballot measures,” Hutchinson said.