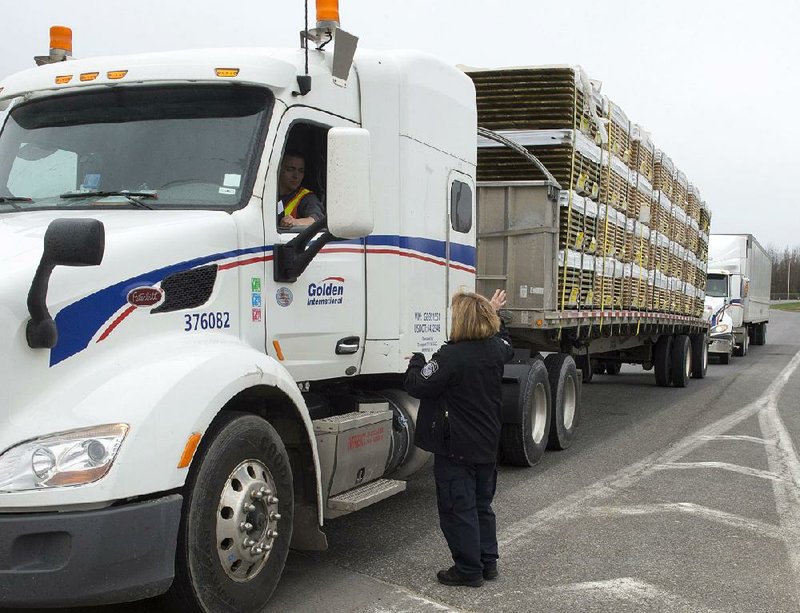 A truck carrying wood goes through the customs checkpoint Tuesday as it enters Champlain, N.Y. Canadian leaders expressed concern that tariffs on softwood lumber, imposed by President Donald Trump’s administration, will hurt people on both sides of the border.

TORONTO -- Canadian Prime Minister Justin Trudeau said Tuesday that Canada and the U.S. could suffer from what he called a "thickening" border, a day after the Trump administration imposed new tariffs on softwood lumber and trade tensions between the two countries escalated.

Trudeau was responding to the announcement of new U.S. duties of up to 24 percent on softwood lumber entering from Canada.

Canada's Liberal Party leader said the two countries are economically interconnected, but it's not a one-way relationship.

"There are millions of good U.S. jobs that depend on the smooth flow of goods, services and people back and forth across our border," Trudeau said during a news conference.

He cited free trade in the North American auto sector as an example of how a typical car part can cross the border up to six times before it ends up in a finished automobile.

"You cannot thicken this border without hurting people on both sides of it," Trudeau said. "Any two countries are going to have issues that will be irritants to the relationship. Having a good constructive working relationship allows us to work through those irritants."

The U.S. and Canada typically enjoy a friendly trading relationship, but things have soured in recent months.

Trump has been railing against Canada's decision to change its policy on pricing domestic milk to cover more dairy ingredients, leading to lower prices for products, including ultra-filtered milk. Trump has called the move "a disgrace" that hurts U.S. producers in dairy states such as Wisconsin.

Trump tweeted Tuesday that Canada is making life "very difficult" for American dairy farmers and that the government "will not stand" for it.

Lumber and dairy issues were also problems under previous presidents. In softwood lumber, the countries have had a once-a-decade cycle of tariffs, trade litigation, and ultimately settlements.

Officials said Canada is not likely to challenge the new tariff legally under the North American Free Trade Agreement or with the World Trade Organization until next year.

The softwood spat is unfolding amid a much bigger trade issue -- renegotiation of the North American Free Trade Agreement. Despite remarks from the president and his Commerce secretary, neither lumber nor dairy are actually part of the current NAFTA.

The Trump administration's decision to slap tariffs on lumber imported from Canada should serve as a warning to its partners that the U.S. is planning stricter enforcement of trade laws, Secretary of Commerce Wilbur Ross said.

Eric Miller, a former Canadian diplomat who is now a Washington-based trade consultant with the Rideau Potomac Strategy Group, said trade friction with Canada should be thought of "as the violin Trump gets to play and set the mood of the place. It's a great way to underline America First to the Europeans, Japanese and others, if you actually take a hard line with Canada."

Information for this article was contributed by Toluse Olorunnipa and Joshn Wingrove of Bloomberg News.