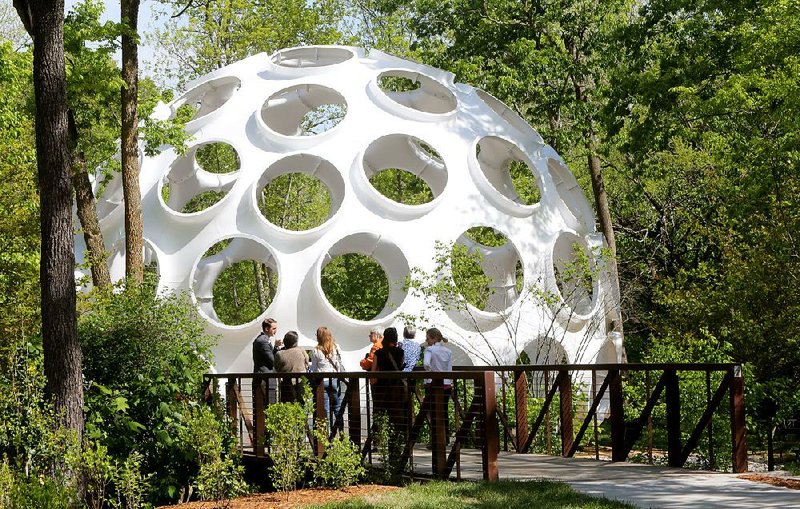 Fly’s Eye Dome, a fi berglass structure created by architect and engineer Buckminster Fuller, can be seen from inside the Crystal Bridges Museum of American Art in Bentonville. The dome will be open to the public in July.

Jennifer De Martino was a little concerned when it was time to put the cap of Buckminster Fuller's Fly's Eye Dome in place at Crystal Bridges Museum of American Art earlier this month.

Every aspect of the installation process for the fiberglass structure, which consists of 135 panels and stands 36 feet tall, had gone smoothly over the previous three days. But De Martino, the head of collections management at the Bentonville museum, admitted to some nervous moments as the cap -- which consisted of 20 panels -- was being hoisted by a crane to the top of the dome.

"I was worried because there were so many connection points that I thought if these don't line up perfectly, how on earth are we going to nudge it," De Martino said. "But it just went beautifully."

With that cap, the four-day installation of the structure that Crystal Bridges bought two years ago was complete. The finished product will be hard to miss for museum guests looking out over the north lawn. The Fly's Eye Dome, which was completed by Fuller around 1980, will not be open to the public until July. But the white structure already stands as an eye-catching piece that can be viewed from inside Crystal Bridges.

Executive Director Rod Bigelow said he was "blown away" after getting his first look at the finished piece, which had been stored in four shipping containers at an off-site location for more than a year.

"When you look at things, especially things that are not even built, you look at them in a tiny, pixelated image, and you never can quite understand how they fit," Bigelow said. "But to see it in real life and to see how elegant and beautiful it is in this space, it's very exciting for us."

Fuller, an architect, engineer and designer who died in 1983, was regarded as a visionary and spent a good portion of his life creating dome structures because he believed they were a solution for low-income housing. Different variations of his geodesic domes have been produced more than 300,000 times worldwide, according to the Buckminster Fuller Institute.

The Fly's Eye Dome, which Fuller was inspired to create after seeing a picture of a fly in the 1960s, was one of the last he produced. He began fabricating the structure with fiberglass expert John Warren in the mid-1970s.

Elizabeth Thompson -- the founding director of the Buckminster Fuller Challenge competition of architects and other professionals and the former executive director of the Buckminster Fuller Institute -- said the 50-foot Fly's Eye Dome was first displayed at the Los Angeles Bicentennial celebration in 1981. After Fuller died, the prototypes spent roughly 30 years stored in Northern California.

"They were really sort of left, literally, out to pasture," Thompson said. "I don't think there was a real understanding of their value. I had the opportunity to go to Northern California and see the condition and the state of disrepair of what I felt, and many others felt, were extraordinarily interesting and valuable from a custom architecture history perspective."

The 50-foot structure was purchased by art historian Robert Rubin, who restored the dome and helped return it to the public eye. It was displayed at the International Art Festival in Toulouse, France, in 2013 and appeared at the Amsterdam Light Festival before Crystal Bridges acquired it.

The museum, which also acquired the Fly's Eye Dome archive that includes plans and documents, spent nearly two years researching and preparing for the installation on its grounds.

Last summer, De Martino said, the team unloaded the pieces from the storage containers and began getting familiar with the hardware and installation instructions. Dylan Turk, a curatorial assistant at the museum, said he visited Warren in California a few weeks ago to go over details and other logistics for the project.

De Martino said the structure consists of large panels and small panels, which weigh between 50 and 90 pounds. They aren't heavy, but they are hard to handle because of their size. Equipment was used to put each piece in place one by one.

"They're fiberglass, but it was almost a surprise to us as we began to install it how flexible those panels are as we're lifting them with different equipment," De Martino said. "You could see them kind of wobble. When you started a new row, you just had a couple of different panels up there. There was some movement, so you quickly wanted to get the other panels on to stabilize it and strengthen it up."

There were a few uneasy moments largely because of the flexing, but Turk said the installation went smoothly and quicker than the 10-day period Fuller originally projected in the 1970s.

"I wish he could know that," Turk said. "We were able to go above and beyond his expectations."

The structure is in place, but Crystal Bridges still has lighting, site work and other details to complete before the Fly's Eye Dome is opened to the public this summer. Programming and other educational opportunities regarding Fuller and his work are also being planned around the dome.

It will be a prominent attraction on the new-look north lawn, which had been largely inaccessible to guests since Crystal Bridges opened in 2011. The museum recently completed construction on its north entrance, which includes an elevator tower and bridge that provides access to and from the North Forest Trail.

Thompson said the staff at Crystal Bridges must be ready to "hold onto their hats" when the Fly's Eye Dome opens to the public. She predicted a groundswell of interest from guests who loved Fuller and his work.

She said the installation at the museum represents a significant moment because it is the first time the 50-foot dome has been on display in the United States since its debut in Los Angeles in 1981.

"For that reason alone, I'm just absolutely thrilled," Thompson said. "But the fact that now this will have a permanent home at an institution with the resources to ensure that it's well cared for and that there is other educational programming surrounding it to really convey the depth and breadth of Fuller's vision, is a dream come true."