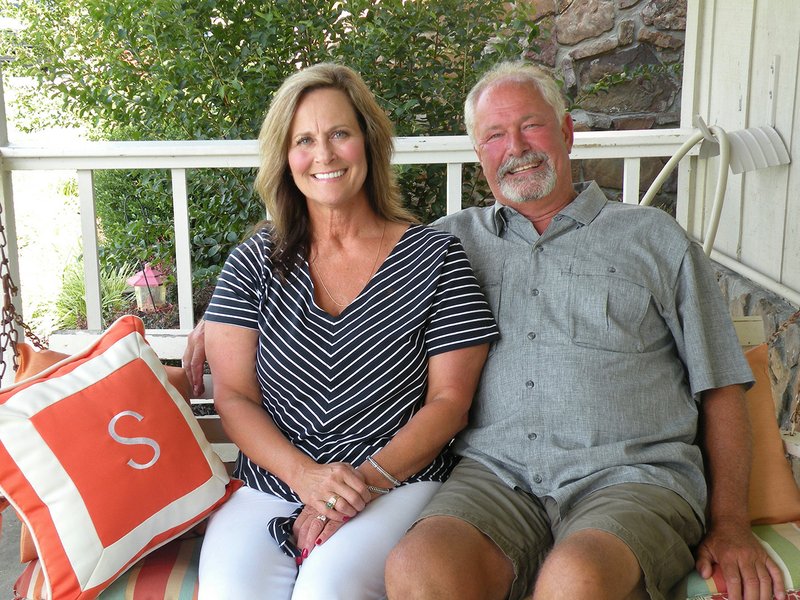 Belinda and Larry Shook of McRae are the 2017 White County Farm Family of the Year. They farm 1,690 acres and raise primarily hay, wheat, corn silage, soybeans and cattle. They have two adult children and six grandchildren. ( Carol Rolf )

McRAE — Farming has been a way of life for Larry Shook since he was a child. His grandparents and parents paved the way for him.

“I grew up farming, but I had to get a job to be able to afford to do it,” Larry said, laughing. For the past 35 years, Larry, 57, has been a member of the North Little Rock Fire Department, which allows him to work one day and be off two days; he is now a captain on a ladder truck.

Larry and his wife, Belinda, are the 2017 White County Farm Family of the Year. They raise Bermuda grass for hay. They also raise wheat, corn silage, soybeans and cattle. They farm 1,690 acres on what they call Shook Farms.

Belinda, 58, works off the farm as well. She is superintendent of the Beebe School District.

Their daughter, Martie Shook Benton, 37, and her husband, Rick Benton, live in Beebe. They have four children: Colton, 16; Gracie, 14; Brody, 10; and Brayton, 8. Martie is assistant principal at Beebe Middle School and director of the school’s alternative-learning environment program. She is a graduate of Arkansas State University-Beebe and has an educational specialist degree from ASU-Jonesboro; she is now working on her doctorate. Rick is employed by Southwest Energy.

Larry and Belinda’s son, Matt Shook, 31, and his wife, the former Lauren Kemp, live in Antioch. They have two children: Archer, 5, and Ellie, 2 1/2. Matt attended ASU-Beebe. He raises cattle with his dad at Shook Farms, and he and Lauren work in the family business, Total Erosion Control. Lauren, who has a Bachelor of Science in Education degree from ASU-Jonesboro, taught first grade before taking over as president of Total Erosion Control, which does all types of erosion-control construction and utilizes the hay and straw services of Shook Farms. Lauren also oversees the bookkeeping for Total Erosion Control and Shook Farms and monitors the Shook Farms’ Facebook page.

Larry’s grandparents, Edd and Margaret Shook, settled in McRae and started a small farm. Larry’s parents, Stanley Shook and the late Mary Shook, relocated to McRae after Stanley served in the military. In 1984, Larry and Belinda built the home in which they now live directly across the field from the Stanley Shook residence.

Larry said growing up in the Shook family “meant you worked.”

He said his primary job as a 5- or 6-year-old was to pick up eggs. As he grew older, he said he was assigned to “more technical duties,” such as driving a tractor or combine.

Larry’s siblings, Mike Shook of Heber Springs and Deanna Fancher of Huntsville, Alabama, also grew up working on the farm.

Larry graduated from McRae High School in 1978 and enrolled at ASU-Beebe. He said he did well in college but knew his passion was for farming.

He left college after a year and a half, and in 1980, he began farming independently. He rented 800 acres and raised soybeans, rice and wheat. Larry said that because of a drought, it was the worst year in farming history, but he persevered.

In 1981, while visiting Bruce Oakley Fertilizer, as it was then called, in Beebe, Larry met his future wife, Belinda Price, who was an employee there. They married in 1982.

Belinda was also raised on a farm, so she was familiar with raising cattle and hay when she married Larry.

She grew up in rural White County near Antioch, a daughter of the late James and Laura Price. She has two brothers, Kenneth Price of Beebe and Ricky Price of McRae, and one sister, Rebecca Reed of Van Buren. Belinda graduated from Beebe High School in 1977 and has five collegiate degrees in education. She has worked as a teacher, principal, assistant superintendent and now superintendent, as well as a college adjunct instructor.

At one time, Belinda took care of the bookkeeping duties for the farm. And in the early years of farming, she drove a tractor, hauled soybeans and assisted however she could. She still helps out whenever possible.

“Shook Hay is the primary crop produced by Shook Farms,” Belinda said, adding that they raise 800 acres of hay, some of which is irrigated, and some is not. “It is marketed through a variety of means, including the very important word of mouth by satisfied customers.

“When hay season is in, regular customers are notified, and hundreds of hay customers visit the hay fields in the summer to stock up on hay for the year. In addition to individuals, hay and wheat straw are also sold to several ranches and numerous feed lots,” she said.

“I supply 26 to 27 feed stores in Arkansas with hay,” Larry said. “They purchase it in an enclosed trailer, which we deliver to them. When they run out, we deliver another trailer load and swap it for the empty trailer.”

Larry said they have customers all over the United States as well.

“I have one customer from Ohio who raises professional bucking bulls,” Larry said. “He came to an event they had at Verizon Arena in North Little Rock and bought my hay there. He’s been buying from me ever since.”

Shook Farms also raises 325 acres of wheat, which is sold to K & K Farm Service in Carlisle; and 80 acres each of corn silage, which is sold to individuals, and soybeans, which are marketed at Bruce Oakley Inc. in North Little Rock.

The family’s cattle operation is shared by Larry and Matt. They raise 160 head of crossbred cattle that are rotated on 150 acres of Larry’s land and 200 acres of Matt’s land. The cows are bred with one of eight Angus bulls or Charolais bulls. They sell the calves at Arkansas Cattle Auction in Searcy.

Larry said weather is the biggest challenge to any farmer.

“The first year I farmed on my own was 1980, the year of the drought. I had rented 800 acres and planted dry-land soybeans — no irrigation. I lost it all,” Larry said.

“What a way to start farming,” he said, laughing. “But I came back the next year and planted the same thing. The weather was better; it couldn’t have been any worse. We did good that year.”

Belinda said she thought their motto ought to be, “Work hard; you can make something out of yourself” or “Hard work pays off.”

Larry said he hopes to retire from the Fire Department next year.

“I’m really not looking to get any bigger with the farm, but it seems I keep getting bigger,” he said, smiling.

Belinda said she has no plans to retire anytime soon from her job as an educator.

When he has time, Larry said, he enjoys fishing and duck hunting.

Belinda said her hobby is her grandchildren.

“All of the grandchildren love the farm,” she said. “When they visit the farm, they are outside, and the visit usually includes a trip to the hay barn to play on equipment and in the hay. They all love to spend time outside riding the golf cart or the Ranger.

“They made a video recently about the farm. The little one, Ellie, had the closing line — ‘If you like to eat, thank a farmer.’”

Belinda said she also likes to ride her bicycle.

“I often ride to Beebe and back, on the back roads,” she said.

The Shooks are active in the community.

Larry and Belinda support the Beebe FFA, the Beebe Public Schools Scholarship Foundation and the Beebe Athletic Boosters Club. They also support the Cystic Fibrosis Foundation; Belinda works with the Beebe FFA in the 65 Roses Bike Tour, which raises money for cystic fibrosis.

Belinda is currently involved with the White County Literacy Council Imagination Library. She also is a member of the Beebe Chamber of Commerce and the Beebe Kiwanis Club.

Lauren is president of the Beebe Kiwanis Club and, last year, organized the first Pancakes With Santa event.

Martie works with the Cystic Fibrosis Foundation and co-chaired the Great Strides event in Searcy. Her husband, Rick, is involved with community youth sports leagues.