First whiskey, then pizza: Highway agency ready for whatever ends up on Arkansas interstates, official says 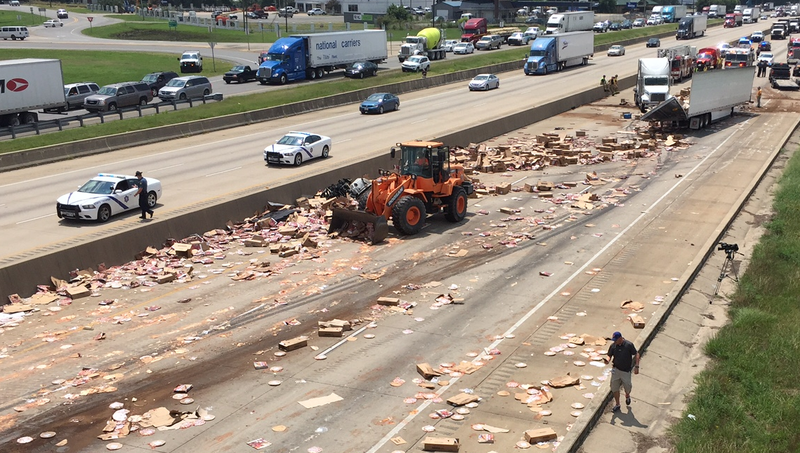 First, a whiskey truck overturned on Interstate 40 in Arkansas, stalling traffic on that highway for hours last week.

Then Wednesday, a truck full of frozen pizzas crashed, spilling its load onto Interstate 30 in Little Rock. That crash didn't injure anyone, but it left motorists stranded for a time in a miles-long backup and a cheesy, saucy mess that took hours to clear.

"We've had several requests for an ice cream truck," Danny Straessle, a spokesman for the Arkansas Department of Transportation, said with a laugh Thursday. "And gosh I hope nothing happens, because if there is one, I might be blamed for it."

The two crashes on Arkansas interstates in recent days aren't related to one another, but each shows how the highway department has to be ready to respond to the unexpected and be prepared to clear as quickly as possible whatever may end up on roads.

Though scraping pizza off the pavement isn't something crews specifically train for, they do have practice getting slick food byproducts off highways. Straessle said a rendering plant in the Russellville area sometimes leads to slick spills on highways in that part of the state.

"It takes forever and a day" to clean up, he said. "But our crews know what to do in that situation."

In the case of the spilled pizza, the pies removed from the interstate were loaded into trucks and dumped off at a nearby maintenance yard. Straessle said officials Thursday were "trying to figure out the most economical way to dispose of" them from there.

The pizza can't be eaten, though that didn't stop numerous users on Twitter from suggesting they would take some off the agency's hands. (There were also "many, many offers" from people who joked they wanted to help clean up the overturned whiskey truck Aug. 2.)

The highway department got in on the fun on social media, too, tweeting that the state needs more "dough FOR highways, not ON highways" and that it was thankful the "Tombstones" on the highway were only the pizza brand. The posts were retweeted hundreds of times, which Straessle said rivals and may even surpass the attention the agency got last year on the platform when it demolished the old Broadway bridge through a series of controlled explosions.

Straessle said the crash drew attention from around the world. He even received a request for an interview with an outlet in the United Kingdom.

"Everybody loves pizza, and everybody has something to say about it, and it was a very interesting afternoon," he said. "I'll just say that."

Straessle said it appears preliminarily that the truck and another vehicle were trying to merge into the same lane and the truck driver overcorrected, sending the vehicle into a barrier wall that it rode for around 100 feet before hitting a bridge column. Even though it made a big mess, it's good that the truck didn't crash into another, smaller vehicle, Straessle said.

"We're fortunate there were no serious injuries," he said.