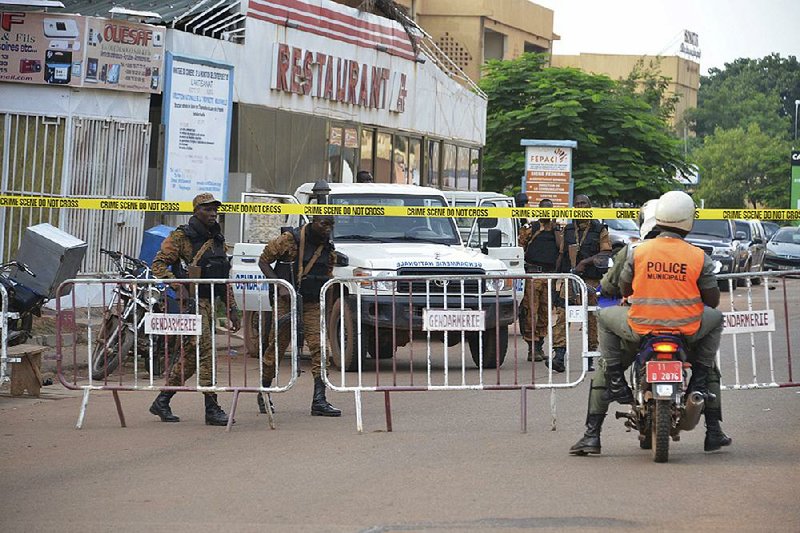 Security forces stand guard Monday at the site of an attack by gunmen in Ouagadougou, Burkina Faso.

OUAGADOUGOU, Burkina Faso -- Hours after gunmen opened fire as patrons dined at the popular restaurant where she worked as a waitress, Amy Sawadogo was still wandering around barefoot at a crisis center, asking about her colleagues.

"I just want to go to the hospital and see who is still alive," the distraught young woman, who was still dressed in her uniform, said early Monday. "I am calling them in vain, no response."

The death toll rose to 18, and authorities said many of the victims were children dining with their families on a Sunday night at the Aziz Istanbul restaurant when horror struck once again in Burkina Faso's capital, Ouagadougou. At least 22 people were wounded in the attack.

The assault in Ouagadougou was similar to an attack in January 2016, when gunmen killed dozens of people at a hotel and a restaurant on a busy weekend evening. Islamist extremists were blamed, and some experts believed the same groups were behind the assault Sunday.

Officials said the gunmen in Sunday's attack arrived at the Aziz Istanbul cafe around 9 p.m. and first opened fire on patrons in an outdoor area before moving inside.

Hyacinthe Sanou, a journalist in Ouagadougou who visited the scene shortly after the attack, said a family had been in the restaurant celebrating the birthday of their 9-year-old son. The boy was struck by a bullet and has been hospitalized.

Two young men wearing jeans and jackets drove up on motorcycles and began indiscriminately shooting at the people inside with Kalashnikov rifles, witnesses said.

"I heard a noise when they smashed a car with their motorbike and before I understood what happened they started shooting at the customers on the terrace," said Assane Guebre, who had been keeping an eye on customers' cars parked outside.

"They were close to me, and I still don't know how they did not hit me first," said Guebre, whose hands were still bleeding from the cuts he suffered when he threw himself to the ground to avoid the bullets.

Gunfire rang out long into the night before the country's special forces ended the attack after nearly seven hours. Initially, authorities had said there were three or four assailants. However, government spokesman Remy Danguinou told reporters early Monday that two attackers had been killed by authorities.

The restaurant, on a busy commercial strip not far from the airport, is popular with both residents and foreigners.

Eight of the dead in Sunday's attack were citizens of Burkina Faso, authorities said. Three Lebanese and two Canadians were also killed, according to the victims' respective foreign ministries. Other victims were from Kuwait, Senegal, Nigeria, Turkey and France, state prosecutor Maizan Sereme said.

"The fight against terrorism is a long-term struggle. That is why I appeal to the vigilance, solidarity and unity of the whole nation to face the cowardice of our adversaries," Kabore said.

His sentiments were repeated by other leaders in the region, as well as by the president of France, who all issued statements denouncing terrorism and supporting Burkina Faso.

In Paris, the office of French President Emmanuel Macron said he discussed the attack in a call with his Burkina Faso counterpart. The leaders agreed that it was urgent to accelerate the deployment of a new 5,000-strong anti-terror force in north Africa's Sahel region, a statement said. With contributions from Mali, Mauritania, Niger, Burkina Faso and Chad -- known as the G5 -- the force is to deploy by September.

At least five members of Burkina Faso's security forces were among the wounded, and another member on leave at the time was among the dead, the state prosecutor said.

As of Monday afternoon, no one had claimed responsibility for the attack at Aziz Istanbul, but it bears the hallmarks of other assaults by al-Qaida affiliates operating in the Sahel region, according to Andrew Lebovich, a visiting fellow at the European Council on Foreign Relations who has studied the groups. Some of the affiliates recently united under an entity called Jama'at Nusrat al-Islam wal-Muslimin, analysts said.

Groups tied to al-Qaida once held a huge territory in Mali before being uprooted and scattered by the French military. Despite a 2015 peace accord in Mali, United Nations peacekeepers stationed in the region have been attacked several times, including an episode on Monday in Timbuktu, Mali. The mission has become one of the most dangerous in the world.

Burkina Faso is a target of terrorism because it contributes more troops than any other West African nation to the peacekeeping mission in Mali, according to Sean Smith, senior Africa analyst at Verisk Maplecroft, a global risk consultancy firm.

Information for this article was contributed by Dionne Searcey and Jaime Yaya Barry of The New York Times; and by Brahima Ouedraogo, Krista Larson, John Leicester and Rob Gillies of The Associated Press.