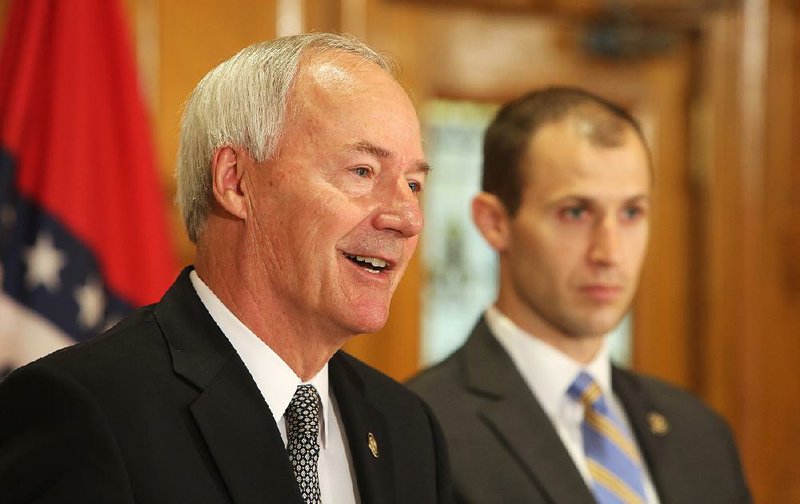 Gov. Asa Hutchinson's administration will forge ahead with a proposed state Department of Human Services technology contract after a majority of senators at Wednesday's Legislative Council meeting voted twice against favorably reviewing the proposal.

The governor said in a statement it was important not to delay the contract.

Friday, the council adjourned midway through its agenda after senators and House members clashed over the proposal. The council set a meeting for Wednesday to again attempt a review.

The department's proposed three-year, $75.3 million contract with Deloitte Consulting of Hermitage, Tenn., has drawn criticism from some lawmakers in the past several days because it's more costly than the three-year $54.4 million proposal submitted by current contract holder Northrop Grumman of Falls Church, Va.

Under the proposal, Deloitte Consulting would provide support for about 200 software applications used by the Human Services Department. If the contract is extended to its maximum length of seven years, it would total about $163 million, compared with $122.7 million for Northrop Grumman, according to Jeffrey Dean, the department's chief information officer.

Hutchinson said that "now that the Legislature has had its opportunity for review of the pending DHS contract with Deloitte for IT services, I will instruct the procurement director to approve the contract in accordance with his legal authority, which is the next and final step in the procurement process."

"The Deloitte contract was considered by the legislative committee multiple times, discussed in depth and received numerous votes," the Republican governor said in a written statement issued Wednesday afternoon.

"In addition, DHS worked with Gartner, a leading research and advisory firm, to develop a proposal and scoring system based on national standards for successful IT procurements. It is important for the taxpayers that we not delay this further," Hutchinson said.

Deloitte was awarded the contract after scoring higher in a technical evaluation by a committee of state employees, state officials said.

Hutchinson has said that state law has required legislative review of state agency contracts since 2003.

Asked if any governor since then has gone ahead with implementing a proposed contract after the Legislative Council blocked the completion of legislative review, state Department of Finance and Administration spokesman Scott Hardin said that "to our knowledge, this is the first time the state has encountered this situation in the procurement process.

"While we don't have a specific date, the contract will be approved promptly," Hardin said.

Asked about Hutchinson's announcement that he intends to proceed with the proposed contract, Sen. Jimmy Hickey, R-Texarkana -- who has been a leading critic of some of the administration's contracts -- said Wednesday afternoon that he assumed Hutchinson would move forward with the contract on the basis of his letter dated Tuesday to the Legislative Council.

"That's his right. I'm not going to be involved in voting for something like that," Hickey said. "This [procurement] process down here is flawed."

House Speaker Jeremy Gillam, R-Judsonia, said he doesn't have a problem with the governor moving ahead.

The proposed contract was well vetted by lawmakers, and 27 House members and senators voted to complete their review of it and 11 voted against reviewing it, he said.

In a letter on Tuesday, Hutchinson called on the council to complete its review of the proposed contract, saying a delay could jeopardize services.

Legislative review of proposed state contracts "should be limited to traditional oversight work to aid in determining whether changes need to be made by future legislation. The review should not be aimed at rewriting the terms or second guessing the executive branch of its decision-making," the governor wrote in his letter.

Previous skirmishes over state contracts between the Hutchinson administration and some lawmakers include a scrapped contract that the Department of Human Services sought with an Indiana-based firm to run seven youth lockups, and the Arkansas Scholarship Lottery's approved advertising contract with Arkansas firm CJRW.

After senators on the council voted 10-6 without debate Wednesday not to review the DHS contract with Deloitte Consulting, the council approved Dismang's motion to expunge the vote to clear the way for a second vote.

"I don't believe that I personally understand what it is that we are doing or trying to accomplish," Dismang told his colleagues. "We had a contract awarded to a vendor. There were two applicants trying to get this particular contract, and the other side didn't even try to object in the proper way. I don't understand what our goal is not reviewing."

Sen. Alan Clark, R-Lonsdale, said, "What has come up here is we have a badly flawed system" that didn't factor in cost enough in the bidding process.

Gillam said that whether there's a flawed bidding process "is very much up for the debate. There has been good points brought out on some things that need to be improved."

The Legislative Council's Review Subcommittee is to study procurement laws and regulations and recommend changes ahead of the 2019 regular session, Gillam said. Eight companies have submitted proposals to be hired as the consultant for that study.

"Yes, we can attempt to micromanage every little thing as this body," Gillam said. "I think the logical thing to do here is review this and then study the process further and make the improvements necessary and pass any change in legislation necessary in 2019."

But Sen. Joyce Elliott, D-Little Rock, said, "No vendor should operate under the notion that this body is obligated to say yes.

"I really object to the notion that because we have done this, this and this, we have to say yes. Otherwise, why don't we just not meet, because the whole purpose is for us to have a voice," she said before the 9-6 vote. "I don't think it is right to suggest that once it gets here, it is a done deal."