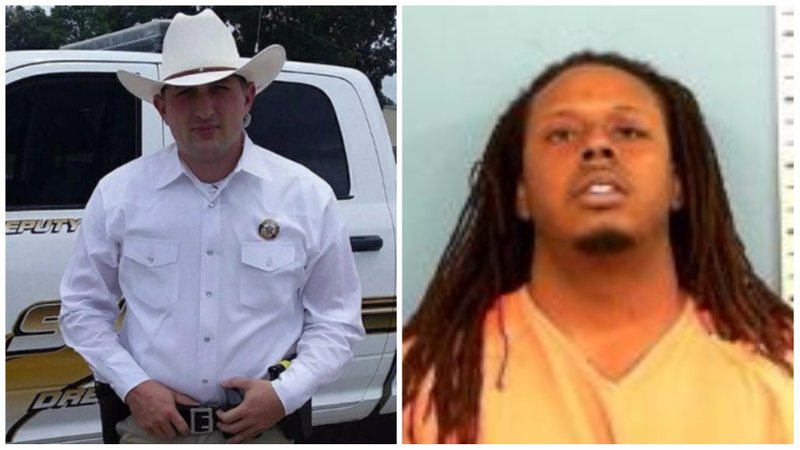 From left, Timothy Braden is shown in this undated photo released by the Little Rock Police Department on Twitter; 23-year-old Samuel Vincent of Monticello has been arrested.

MONTICELLO -- Drew County sheriff's Deputy Timothy Braden was known for being a sharp dresser, from the top of his white cowboy hat to the toes of his boots.

His fellow deputies will honor that reputation at his funeral.

"We'll all be down there decked out, just like Braden always was," Drew County Sheriff Mark Gober said.

Braden, 29, of Lincoln County, was killed shortly after 1:30 a.m. Thursday when his patrol car crashed into a tree during a high-speed pursuit.

According to an affidavit from the Arkansas State Police, Braden radioed Monticello Police Department dispatch to say he was attempting to stop a Dodge Charger but the driver -- later identified as 24-year-old Samuel Vincent of Monticello -- refused to stop.

As they drove into a sharp curve about 4 miles down Barkada Road northwest of Monticello in Drew County, both vehicles left the roadway and crashed into a tree and power pole.

Drew County sheriff's Deputy Brandon Wright arrived at the scene immediately after the crash and arrested Vincent, according to the affidavit.

When he checked on Braden, who did not exit his vehicle, Wright found him unresponsive.

Braden was taken by ambulance to Drew Memorial Hospital where he was pronounced dead at 3 a.m.

Authorities searched Vincent's car and found a camouflage bag containing an estimated 4 ounces of suspected marijuana, a scale and nearly $4,000 in cash, according to the affidavit. His backpack contained a folding knife and $129 in cash, the affidavit said.

Vincent voluntarily spoke with Arkansas State Police special agent Bo Norris at 4:43 a.m. Thursday, the affidavit said. Vincent told the investigator, without a lawyer present, that he had been out and was heading home for the night when blue lights came up behind him, according to the affidavit. He told Norris that he "panicked" because he had been smoking marijuana that night and the substance was in the car, the affidavit said.

At his first court appearance Thursday afternoon, Vincent hung his head low and at times shook his head back and forth. He stood in front of Circuit Judge Sam Pope and answered questions with a simple "Yes, sir."

Vincent is charged with first-degree murder, fleeing, possession of marijuana with the purpose to deliver and possession of drug paraphernalia, all felonies.

Bail was set at $200,000. Plea and arraignment is set for Sept. 18 in Monticello. Vincent is being held at the Ashley County jail.

Drew County Prosecuting Attorney Thomas Deen said the first-degree murder charge is warranted, even though Vincent did not hit Braden's car with his own.

"The murder charge is based on causing the death during the commission of the felony," Deen said. "The evidence supports it for sure."

The investigation into the crash is ongoing.

As Vincent was being led out of the Monticello courtroom in an orange jumpsuit and handcuffs, he said he was "so sorry" and he "never intended for this to happen. This is the worst nightmare for me."

During the court appearance, Drew County sheriff's deputies and other personnel lined the courtroom walls. Gober sat in the very last pew on the right side of the galley.

Braden had been one of Gober's deputies for about a year. Just like his other six deputies, Gober said, Braden was like a son to him.

"He was a good kid. He loved law enforcement," Gober said. "When he came to work, he really worked."

He had aspirations of becoming a trooper with the state police.

"Braden was that type. He would've moved up," Gober said.

"Normally my inclinations are pretty good, and it was good for him when he interviewed for the job," Gober added. "You could see it in the way he carried himself and the way he talked. He wasn't a slouch. He did his job. You didn't have to tell him to go out there and do his job, he was already getting it."

Braden was normally strait-laced and all business, Gober said.

"But when he made a joke, it was the funniest joke you ever heard," he said.

Gober said the mood in the department was somber Thursday, but Braden's death will not keep officers from doing what they are called to do.

"We're going to keep doing our jobs. There's no fear at all," Gober said. "That's what we do. It's the job we signed up to do. We know that it could happen, but our job is to protect first the public, then ourselves. If anything, it makes us more united in our beliefs that we're doing the right job, the right thing."

Gober said Braden is the first Drew County deputy lost in the line of duty.

The state has now lost three law enforcement officers in the line of duty this year. Kevin Mainhart of the Yell County sheriff's office was fatally shot during a traffic stop May 11. Newport Police Department Lt. Patrick Weatherford was shot and killed June 12 while assisting another officer investigating a car break-in.

The sheriff's office is sending its support and prayers to Braden's wife and four small children, Gober said.

"The youngest one is 6 months old," he said. "It was a real blow to me. I've got kids, and the youngest one is 18. These guys here ... they're mine, you know. There's nothing I wouldn't do for them. I'd put my life on the line for every single one of them. And they'd do the same."

Gober said he is receiving calls of support and offers of help from law enforcement agencies all over the state and the nation.

The McGehee Police Department, where Braden began his career and served for three years, posted condolences on the department's Facebook page and said officers there are "deeply saddened" by Braden's death.

"He was family to us," the post read. "Please keep his family and the Drew County Sheriff's Office in your thoughts and prayers."

Gov. Asa Hutchinson said in a statement that he was "deeply saddened" to hear of Braden's death.

Attorney General Leslie Rutledge issued a statement praising Braden because he "never backed down when faced with a dangerous situation to protect the citizens of Drew County.

"I extend my thoughts and prayers to Deputy Braden's young family, including his wife and four children, his dear friends and the people of Drew County," Rutledge said. "While today marks the end of watch for Deputy Braden, I know he will continue to watch over us all."

Funeral arrangements for Braden were unknown as of late Thursday, but Gober said his deputies and the law enforcement community will show up in force to honor Braden and his service.

On Thursday afternoon a long procession of law enforcement vehicles with their blue lights flashing traveled along Interstate 530, escorting a hearse to the state Crime Laboratory in Little Rock and later escorting Braden's body home to Star City.

"I've got a great group of guys. He was a good kid," Gober said, and then he stopped, unable to speak. A tear slid down his face. "He will always be in our thoughts. We'll give him what every law officer deserves -- a good send-off."