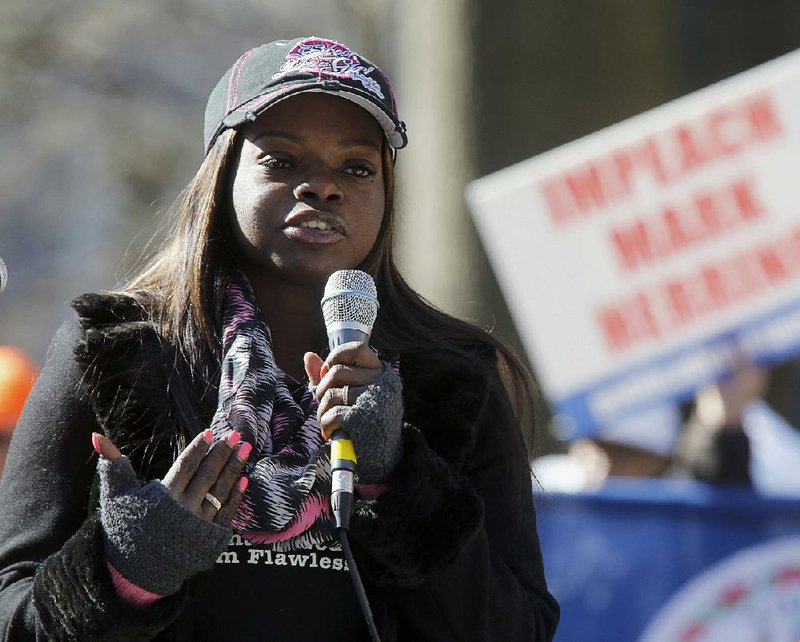 Shaneen Allen, an advocate for the Second Amendment, speaks last year during a pro-gun rally at Capitol Square in Richmond, Va.

TRENTON, N.J. -- The handgun that Shaneen Allen was carrying when she was pulled over on a New Jersey highway could have sent her to prison for years.

Now the legal saga that kept the Pennsylvania mother of two in jail for 48 days has helped inspire a measure that could change handgun laws across the country.

"Hopefully I'll be at the White House next to [President Donald] Trump signing this bill," said Allen, who has become a face of the Republican effort to break down barriers to carrying concealed firearms between states. "Republicans put their money where their mouth was."

The GOP-led House passed legislation this month that would allow gun owners with a state-issued concealed-carry permit to carry a handgun in any state that allows concealed weapons. The bill faces longer odds in the Senate, which didn't vote on it before leaving for the year.

The measure is a top priority of the National Rifle Association, and a letter in support of the measure has been signed by Arkansas Attorney General Leslie Rutledge and 23 other Republican attorneys general.

Seventeen Democratic attorneys general have called on Congress to give up the effort, the first significant action on guns in Congress since mass shootings in Nevada and Texas killed more than 80 people combined.

Even N.J. Gov. Chris Christie, a Republican who has pardoned a number of out-of-state residents caught up in New Jersey's strict gun laws, is against the change. Christie said it's a states' rights issue.

Allen's story, along with others who have been caught up in similar circumstances, has helped the measure get this far.

North Carolina Republican Rep. Richard Hudson, who authored the legislation, cited Allen's story in a speech on the House floor as an example about why the measure is needed.

Christie has pardoned Florida and North Carolina residents who faced charges even though they legally possessed firearms in their home states. On Friday, he pardoned three people charged with handgun possession, including a man with permits to carry a gun in Pennsylvania and New York who was charged after he told police he had a gun after a car accident.

In another case, prosecutors dropped charges against a Delaware man who had a Tennessee concealed-carry permit but faced felony gun charges in his new state.

Allen, a phlebotomist, was driving on the Atlantic City Expressway when she was pulled over for making an unsafe lane change in October 2013.

She told the police officer that she was carrying a firearm and that she had a Pennsylvania-issued concealed-carry permit.

"I thought my license was just like a driver's license," she said.

She spent 48 days in jail before she was admitted to a pretrial intervention program. In 2015, while gearing up for his failed presidential run, Christie interviewed her and eventually pardoned her.

Allen's ordeal captured national attention from gun-rights advocates and prompted her to switch from a Democrat to a Republican and vote for Trump over Hillary Clinton. She says it also turned her into an advocate for the Second Amendment, including lobbying lawmakers to pass the measure and speaking at rallies.

Allen's response to opponents echoes those of the GOP lawmakers who back the bill: Laws aimed at keeping weapons from people intent on committing a crime are essentially futile.

"All I can say is I pray for them. Crime is everywhere," she said. "Every person that is carrying could possibly save your life. A crime could happen anywhere."