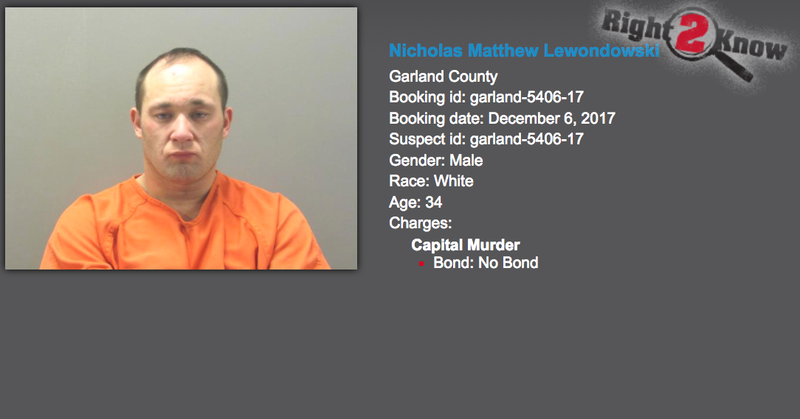 HOT SPRINGS -- Three homicide victims found in a home on Nevada Street earlier this month had "multiple gunshot wounds" in their bodies, according to the affidavits for two search warrants filed in connection with the case.

The bodies of Paul D. Power, 40, Dory Ann Power, 46, and Brenda Sue Lawson, 60, all of Hot Springs, were located shortly before 7:30 p.m. Dec. 5 inside a residence at 208 Nevada St. after Hot Springs police went there for a welfare check after being told by a witness that there were three homicide victims inside.

The witness also told police Nicholas Matthew Lewondowski, 34, of Hot Springs had said he killed the three and had recruited the witness to help move two of the victims' vehicles, including a black 1998 Pontiac Grand Prix that belonged to Dory Power, which was taken to a vacant lot in the 100 block of Cherry Street, according to the affidavits, which were filed Dec. 11.

Lewondowski was arrested about 7 a.m. Dec. 6 at a residence at 347 Mazarn Road and charged with three counts of capital murder, punishable by the death penalty or life in prison without parole.

Information obtained during Lewondowski's arrest led to the location of a white 2002 Chevrolet Suburban that belonged to Paul Power about 1 mile away from the Mazarn Road residence.

Both the Suburban and Grand Prix were recovered by police, and search warrants for the vehicles were requested in the hope of locating ballistics evidence -- specifically firearms, ammunition and cartridge casings -- and other evidence including DNA from bodily fluids, fibers, latent prints, and electronic evidence such as cellphones or wireless communication devices, the affidavits stated.

Police have not formally released any information concerning the cause or manner of death for any of the victims. A gag order that limits pretrial publicity was issued Dec. 8 during a hearing in Garland County District Court, during which Lewondowski pleaded innocent to all the charges.

Lewondowski, who was on parole at the time of his arrest, remains in custody without bail. A felony review hearing is scheduled for Jan. 22, when the case will likely be moved to Garland County Circuit Court.

All four of them left the witness's residence and drove to the Nevada Street house, which was reportedly the residence of one of the victims. Lewondowski later called the witness to ask for help in disposing of the victims' vehicles, according to an affidavit.

When police responded to the Nevada Street residence, they found the rear door standing open and the bodies of the three victims inside lying in pools of blood, the affidavit said.

Lewondowski has a criminal history dating back 15 years that includes more than 14 felony convictions, including a conviction for second-degree battery in 2003.

He was charged with first-degree battery Aug. 27, 2016, regarding an attack on a fellow inmate at the jail, but the charge was withdrawn for further investigation.