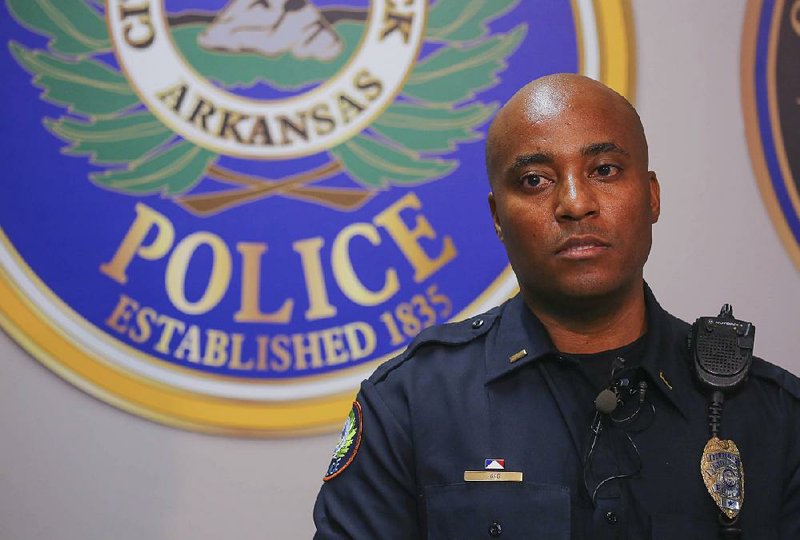 Little Rock police have altered what types of killings are included in the city's homicide total, a figure that has become a marker for a violent year in Arkansas' capital city.

The new way of tallying the killings has already lowered this year's homicide total and is expected to lower future yearly totals for the department.

Yet agency officials say the changes are not an attempt to change Little Rock's image as a violent city but, instead, are a move that allows them to fall in line with guidelines from the FBI.

"We're not trying to cook the numbers or make it look confusing. It sounds confusing, but it's straight on point with the FBI guidelines," said Lt. Michael Ford, a Little Rock police spokesman.

"Anytime the prosecutor's office rules that it's justified -- that will take our homicide numbers down," he said in the interview. The agency will also not include accidental homicides within the yearly total, he said.

An FBI website on crime figures states that justifiable homicides are tallied separate from murder and non-negligent manslaughter "because these killings are determined through law enforcement investigation to be justifiable."

At least two of this year's killings in Little Rock have already been ruled justified and taken off the homicide list, according to preliminary data posted on the city's website.

The data show there are 53 homicides between the beginning of the year through Dec. 18. Officials say two killings were removed from the total because they were fatal officer-involved shootings that were found to be justifiable.

According to Ford, the new way of tallying the killings could have probably been put in place a few years ago.

Some Arkansas law enforcement agencies vary on what types of killings they include in their public homicide totals.

"It's still classified as a homicide," he said.

The sheriff's office, Burk said, does not tally accidental killings as homicides.

This year, many say the high homicide count is emblematic of Little Rock's issues with violent crime.

As of Friday, the city has seen a total of 55 killings so far this year -- the highest yearly total in a decade and the third highest total since 1993, when the city saw the highest number of homicides in its history. Police recorded 76 homicides in 1993.

Little Rock Mayor Mark Stodola said the new way of tallying killings will not change people's impressions of the city's crime this year. And in the public's mind, he said, people view homicide as a killing in which somebody could be criminally charged, and not one that is ruled justified.

"I think that's a more accurate reflection for the public to know," he said.

Although Little Rock police will no longer include accidental or justifiable killings on its homicide count, agency spokesman officer Steve Moore said some slayings will be included on the list, even if criminal charges are not brought against the killer.

In those cases, he said the killer has not been charged with a crime, but a separate person has been criminally charged in relation to the slaying.

One example is the death of 20-year-old Mashon Jackson, who was killed by a single bullet in a shootout on Dr. Martin Luther King Jr. Drive on Jan. 8.

Investigators couldn't determine who specifically fired the shot that killed Jackson. The Pulaski County prosecuting attorney's office cleared the men who were involved on the opposite side of the shootout.

The two men police say were riding with Jackson that night -- Jerico Mosley and Tre'sean Freeman -- were each charged with one count of manslaughter in connection to Jackson's death and four counts of unlawful discharge of a firearm from a vehicle, online court records show.

Jackson's death will be included within the city's homicide count because both Freeman and Mosley were criminally charged, Moore said.

Moore said the death of 18-year-old Zayana Coakley is expected to be removed from the list because her killing was found to be an accident. Police documents state she was shot in the head while being handed a gun at a Little Rock home earlier this year.

"This makes it much more difficult ... now we have a fluctuating number that we have to keep up with," Moore said in an interview earlier this year.