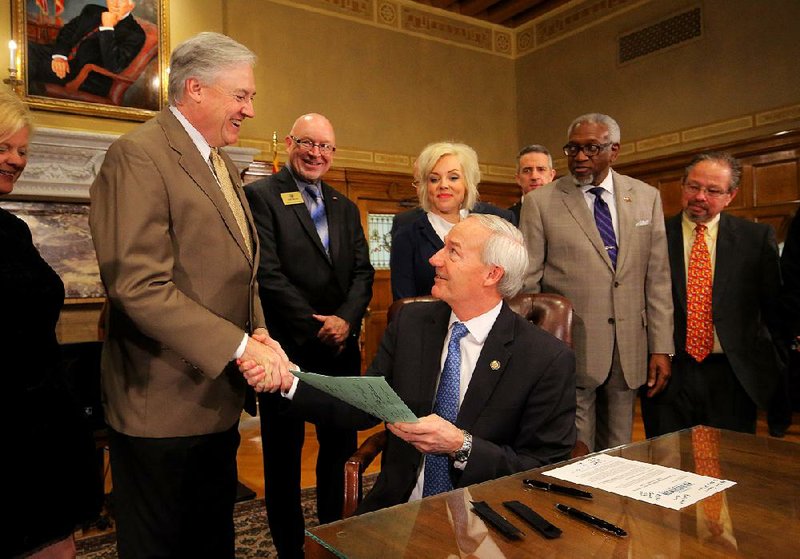 Gov. Asa Hutchinson on Wednesday signed legislation for the Arkansas Higher Education Coordinating Board to implement a funding formula for two-year and four-year colleges that is based on student success rather than enrollment.

"I take seriously objectives that we set as a state and it's a challenge for us, but it's an important objective to increase degree and certificate attainment from the 40 percent level up to 60 percent by 2025," the Republican governor said at a new conference in his Capitol conference room, with lawmakers and officials from colleges and universities on hand.

"In order to accomplish that, we really have to get higher-education funding right," Hutchinson said. "The move from simply student enrollment measurements to student progression measurements [in the funding formula] is a landmark change in the state of Arkansas."

He said he pledged to seek a $10 million increase in state general funding for public colleges in fiscal 2019 from the Legislature next year because "really, to make [the new funding formula] work, you have [to have] the investment in order to encourage the change in behavior and the change in priorities and reward those that have success." Fiscal 2019 starts July 1, 2018.

"You have to be mindful that the investment in higher ed would be in the second year of the biennium because that first year [fiscal 2018] is to put it into place and then to measure it at the close of the year as to how the distribution should be made," Hutchinson said.

The Higher Education Coordinating Board will be required to adopt separate policies to create formulas for two-year and four-year colleges. There are 22 two-year colleges and 10 four-year schools.

Act 148 requires the policies adopted by the board to contain measures for effectiveness, affordability and efficiency that acknowledge the following priorities:

• Progress toward students' completion of their programs of study.

• Affordability through on-time completion of students' programs of study, limiting the number of "excess credits" earned by students and the efficient allocation of resources.

• Institutional collaboration that encourages the successful transfer of students.

Under Act 148, the board will be required to use the formula to recommend funding for colleges, and funds unallocated "due to productivity declines shall be reserved by the [Department of Higher Education] to address statewide needs in higher education."

The Department of Higher Education "will have all our policies drafted by the April board meeting and then sent back over for the governor's office review and [Arkansas Legislative Council] process to look at the rules," said department Director Maria Markham. "We have to have our final draft to our coordinating board by October of 2017, so we can make our first round of funding recommendations based on the new formula."

The law states that the productivity-based funding formula "shall not determine the funding needs of special units such as a medical school, division of agriculture or system offices."

Hutchinson said the University of Arkansas for Medical Sciences and the UA's Agriculture Division will be judged differently, and the two-year and four-year colleges wouldn't have a leg up over them under the new funding formula.

Markham said a work group is looking at funding for entities such as UAMS and the Agriculture Division that won't be in the formula.

"We are mindful of the fact that they've not received any new funding in quite some time. It has been level for them as well, so we are working on measures to show this productivity, so we can recommend additional funds," she said.

Hutchinson has recommended that the Legislature keep total general-revenue funding for the higher-education institutions at $733.5 million in fiscal 2018, which starts July 1.