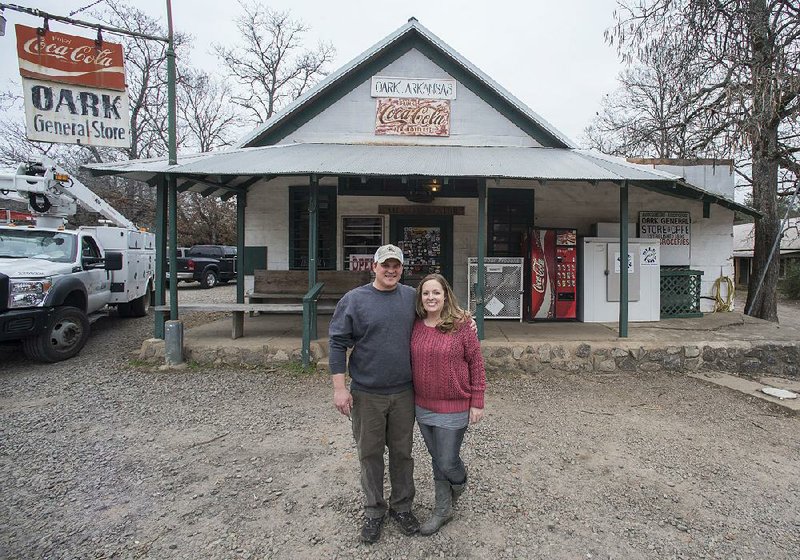 OARK -- Brian and Reagan Eisele laugh about some of the rumors that swirled around this rural community in northern Johnson County when they arrived about five years ago.

The young couple had raised suspicions by trading in the hustle and bustle of political careers in Washington for a quieter life in the Ozark Mountains. Locals thought there was something awfully peculiar about their decision to buy the historic Oark General Store. It didn't matter that Reagan was originally from Hartman, a town about 25 minutes away.

"They thought we were undercover DEA agents here to bust up marijuana operations," she said.

It didn't take long for the uneasiness to fade. The Eiseles aren't "narcs," as Brian put it. Instead, they're the next in a long line of owners who have rolled up their sleeves at the historic store and cafe, running a business that has been a vital part of this mountain community for more than 125 years.

Oark General Store, off picturesque Arkansas 215, opened its doors for the first time in 1890 and is considered to be the oldest continuing business of its kind in the state. Before modern transportation and paved roadways, locals in the mountain community depended on the store for supplies and essentials. More recently, it has become a go-to destination for travelers, hunters and outdoor enthusiasts who stop in for a burger and a slice of pie.

Anyone who steps through the front door will likely encounter Brian, 33, and Reagan, 32, who mingled with guests as the lunch crowd dwindled on a recent Thursday. The couple first bought the store as newlyweds in May 2012 without any previous experience running a restaurant, but have embraced their role as owners of the rustic place.

The young couple saw it as an opportunity they just couldn't pass up five years ago.

Both had been working for congressmen in the nation's capital. Reagan was a staff member for Sen. John Boozman (R-Ark.), while Brian worked for South Carolina's Rep. Joe Wilson. Though the two ran in the same circles, they didn't actually meet until taking staff delegation trips to Azerbaijan.

It wasn't long before they were dating, engaged and preparing for a wedding. Brian, a South Carolina native who said he couldn't imagine raising a family in Washington, fell in love with Arkansas during his first trip to visit Reagan's parents and considered moving to the state. While planning their wedding, they discovered Oark General Store was on the market and began to consider the prospects of starting a new adventure by being self-employed.

"They'll be the first to tell you, when they bought this place they didn't know anything about running a restaurant," said Jim Kruger, a Johnson County resident who said he and his wife, Diana, have frequented the restaurant for about 30 years. "They'll admit it. They've told us. But they hung in there."

The Eiseles leaned on the experience of their staff in the early days, learning the ins and outs of the business from employees who had served customers at the store for years. The previous owners also offered a hand, sticking around for about six weeks to help the transition go as smoothly as possible.

"They were young, coming from D.C., and they had no clue," said Christinia James, who is from the community and has worked at the restaurant for a few years. "But they've done well."

The Eiseles believe one key was their initial ownership approach, recognizing the importance of the store to the locals.

"When we took over we initially, we did not change anything," Reagan Eisele said. "Then very slowly we started kind of seeing what worked for us, what wasn't working so much. But that was a big effort on the front end, was to not change anything because we didn't want to mess with a good thing."

OWNING A BIT OF HISTORY

Oark General Store was added to the Arkansas Register of Historic Places in 1995. According to the listing, Oark was all but isolated from the rest of the state before modern transportation because of the landscape surrounding the community. So the store was vital to the community when it was built, providing residents with essentials that otherwise would've been hard to get in the mountain town.

Brian Eisele has tried to dig into the history of the store, but has had to mostly rely on word-of-mouth recollections. He believes a concrete slab poured to expand the store likely occurred in the 1950s or 1960s. Easy prep food service -- such as sandwiches -- had been offered by the store for years, but it didn't become a full-scale restaurant until the 1990s.

"When we first started coming here back in the late '80s, early '90s, it was predominantly a little general store where you'd run in here to get a nut and a bolt or a sand belt for your tractor," Kruger said. "Then they started selling bologna and cheese sandwiches for the weekenders.

"It has had its highs and lows, like any business. But over the course of the years it has morphed into more of a restaurant than a general store. ... It has gradually gotten to being a really good restaurant."

Some signs of the general store's roots remain. In addition to its breakfast and lunch menus, the store also sells fuel and a few food items including soup, bread and peanut butter. Customers can buy toiletries and other essentials, as well.

There is no cellphone service in Oark, but the Eiseles have brought the store a little closer to modern times by installing a Wi-Fi hot spot and satellite television. Brian Eisele remembers the grumbling when some locals first noticed the television on a shelf above the kitchen area. He said some of them "threw a fit."

But he doesn't believe it has interrupted the store's persona as a place to meet and talk.

"You go to restaurants nowadays in town -- I'm sure you've noticed it -- everyone is sitting at the table doing this," Eisele said as he pretended to stare at a smartphone. "Here, you notice how loud it is. Everyone has to talk to each other and some are louder than others."

The owners are continually surprised by the diverse clientele, which Brian Eisele illustrated by flipping to a page on a guest book signed by visitors from Paris, Ark., and Paris, France.

People from every state have come to the store. Numerous countries are represented as well, although the Eiseles haven't counted. But Reagan Eisele remembers a day when a guest from the Ukraine and one from Russia visited -- and they weren't even in the same traveling party. She said much of the international travel is attributed to the TransAmerica Trail, a 5,000-mile path for dual-sport motorcycles that stretches from Tennessee to Oregon, which runs through Oark.

Earlier this month, Brian Eisele said a group from a Northwest Arkansas-based Fortune 500 company walked into the store for a meal and held a business meeting.

Overall, the Eiseles estimate between 50 and 70 guests stop in for lunch or breakfast on a typical day this time of year. The store is open from 8 a.m. to 4 p.m. Winter is the slowest season for the remote business, which doesn't count on through traffic for guests since the paved road ends just three miles north of the store.

"That first year was terrifying when you hit winter," Reagan Eisele said. "The previous owners would tell us, 'Squirrel away as much as you can and get through winter. When spring comes they'll come back.' ... I don't think I was prepared for that. But since then we've been better prepared for it."

Oark is a destination for motorcycle enthusiasts, canoers, hikers and other sightseers in the spring, summer and fall.

According to data from the state Highway and Transportation Department, about 300 vehicles travel the stretch of Arkansas 215 daily.

It's not unusual to serve about 300 people a day. Sometimes the crowds are even larger.

Joe David Rice, tourism director for the state Department of Parks and Tourism, said interest in a place like Oark is no surprise because authenticity is vital for travelers who want to see the "real America." Rice said the general store offers that experience for its guests.

"The people that own Oark General Store are real folks," Rice said. "They serve real food. It's the real building. It's the real McCoy. It's such a departure from the fast-food things up and down the interstate. You can wheel in there and it's like you sort of step back about a half a century."

EXPANDING TO THE CITY

Travelers won't have to make the journey to Oark to enjoy a burger much longer.

Brian Eisele is working with a partner on a project that will expand the Oark brand by opening a burger stand inside a convenience store in Clarksville, which is about a 20-mile drive down Arkansas 103. Eisele said Oark Burger Company will be in the M̶o̶t̶o̶r̶ Motion* Fuels convenience store on the corner of Arkansas 21 and U.S. 64 in Clarksville.

The Eiseles said it would be too challenging to run Oark General Store and the new burger stand, so Brian Eisele has enlisted his brother for help. The project is tentatively scheduled to be completed by the beginning of April, extending the store's reach outside the mountain town.

"People have said, 'Aren't you worried it's going to pull your business from Oark?'" Reagan Eisele said. "I'm not [worried] because we're a destination. People come when they're wanting to come to Oark."

The Eiseles said they'll continue to do everything they can to make sure the store's reputation as a welcoming oasis for tourists and travelers in the Ozark Mountains remains, while maintaining a commitment to a community that has relied on the place for more than 125 years.

The Krugers, who eat at the store three or four times a month, said the Eiseles have proved to be "congenial kids" willing to embrace the town and the work that comes with running the store.

They've also shown an appreciation for the place in their five years as owners, which the Krugers believe is important because the historic store's role in the community will continue.

"The store may change," Diana Kruger said. "It may grow smaller. It may be bigger. But it will be here."

*CORRECTION: The name of the Motion Fuels convenience store was incorrect in a previous version of this story.