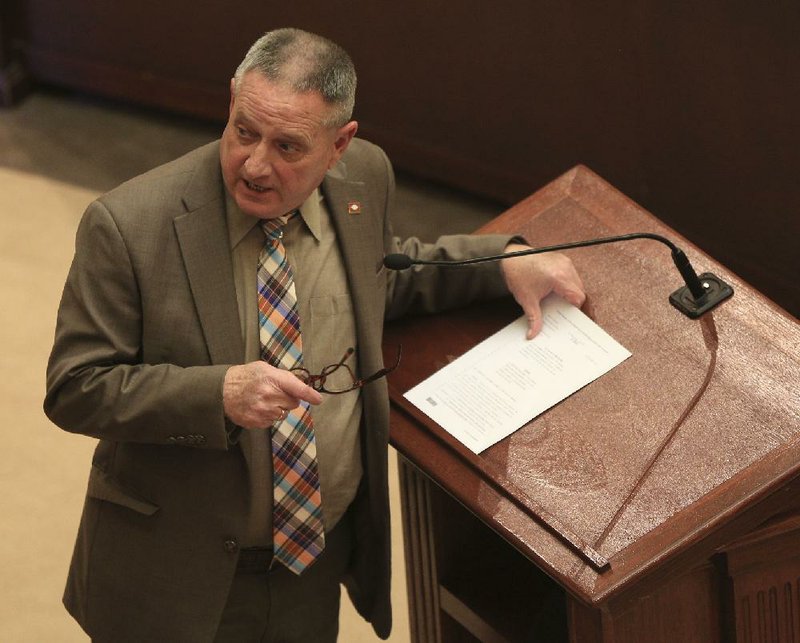 Rep. Douglas House asks a question Monday on the House floor before presenting a pair of bills, House Bill 1371 and House Bill 1298, concerning the ownership and licensing of medical marijuana dispensaries and cultivation facilities.

A pair of medical marijuana bills that sputtered through a committee last week passed with little opposition in a House vote on Monday.

House said licensees would not be able to sell their licenses, and any transfers would have to be approved by the Arkansas Medical Marijuana Commission.

The commission will be in charge of licensing dispensaries and cultivators under the state system being set up to allow use of the drug for medical reasons.

[BILL TRACKER: See the status of all marijuana-related bills in Arkansas Legislature]

"It's not totally free market," he said. "We're issuing and licensing people to run it -- kind of like railroads. Can't everybody have their own railroad."

Sylvester Smith, a lobbyist who represents medical-marijuana grower and seller Columbia Care, told lawmakers in a committee meeting last week that the bill would allow business owners -- or their proxies -- to be sued as individuals.

House said the point was to be able to hold an individual responsible for wrongdoing.

HB1371, also by House, would require that Arkansans hold 60 percent ownership interest in dispensaries and cultivation facilities. It also contains a provision that would require natural persons, not corporations, to hold licenses. It passed 84-1.

Rep. Aaron Pilkington, R-Clarksville, asked House if there was such thing as an "unnatural person."

The voter-approved Arkansas Medical Marijuana Amendment requires 60 percent of the owners to be Arkansans, but there's a potential loophole in the provision, House said.

If there were 10 owners of a dispensary, seven could be Arkansans to satisfy the amendment, but the remaining three out-of-state owners could hold a disproportionately larger share in the organization.

The bills are supported by Little Rock-based lawyer David Couch, who sponsored the amendment, and Melissa Fults, executive director of Drug Policy Education Group, who backed a competing measure that the state Supreme Court rejected during early voting.

Both bills head to the Senate for further consideration.

House Bill 1298, by Rep. Doug House, R-North Little Rock, would require a license for a dispensary or cultivation operation to be held by a person instead of a business or corporation. The bill also allows license transfers. It passed 83-1.