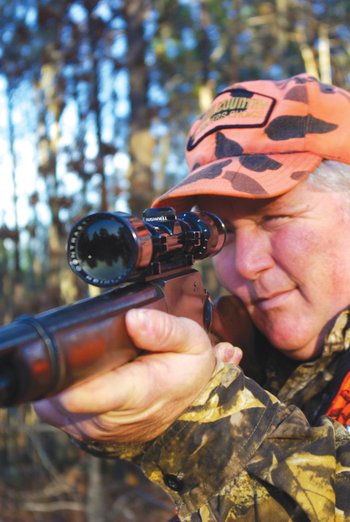 Many deer hunters have no idea who developed commonly used equipment such as the rifle scope, being used here by Alex Hinson of Paron.

Have you ever considered how different today’s whitetail hunting is compared to hunting in years past? Many significant changes have occurred during the past century and a half — changes never envisioned by the deer hunters of yesteryear.

Some of the most significant developments relate to the equipment we use. Our firearms have changed. Our ammunition has changed. Our clothing has changed. And we have many more accessories that give us distinct advantages when hunting crafty whitetails.

Many hunters have no idea when or how some of the gear we use most came to be. You probably know that Eli Whitney invented the cotton gin, and Robert Fulton invented the steam engine. But do you know who invented the rifle scope, the compound bow or modern camouflage? You will after reading this.

The first use of a telescopic sight on a pistol dates to 1834, but attempts to create a workable rifle scope were unsuccessful until 1880. That year, August Fiedler, a German forest commissioner, developed an adjustable telescopic sight for Prince Reuss IV of Riesengebirge. This was the predecessor of all modern rifle scopes.

The first practical smokeless powder was developed around 1864 by German artillery captain Edward Schultze. But while Schultze’s powder was highly successful in shotguns, it was too fast for most rifles.

It was French chemist Paul Vielle’s 1886 invention of a smokeless gunpowder called “Poudre B” that had the greatest effect on deer hunters. This powder revolutionized the effectiveness of small guns because it gave off almost no smoke and was more powerful than black powder. Shooters no longer were enveloped in a dense cloud of smoke as soon as they pulled the trigger. Poudre B also provided a higher muzzle velocity, which meant a flatter trajectory and therefore more accurate long-range fire. Poudre B ushered in the era of the high-power, small-bore rifles still used by most deer hunters.

In August 1894, John Browning was granted a patent for a new lever-action rifle design. Unlike previous models, this one — the Model 1894 — had a unique drop-link action, allowing the rifle to be trim and light but still function with full-length rifle-type cartridges. Before the Model 1894, for a lever gun to be so trim, it had to be chambered for shorter “pistol size” cartridges like .44-40 or .38-40.

To say the Winchester Model 1894 was popular is a drastic understatement. Millions have been produced, making the Model 1894 the best-selling centerfire sporting rifle of all time.

In 1961, Missouri deer hunter H.W. Allen began looking for ways to harness the block-and-tackle principal of a pulley to a bow. His goal was to make a bow easier to draw, even at heavy draw weights. Allen succeeded, and on June 23, 1966, he patented his invention, the first compound bow. Today, eight of 10 bow hunters shoot a compound.

The scores of climbing treestands available to today’s deer hunter all are direct descendants of treestands made by Georgia’s Baker Manufacturing Co. in the late 1960s. Baker’s wood-and-aluminum climbing platform was awkward by today’s standards but was intriguing enough to ignite a fascination that would jump-start the treestand manufacturing business.

Few inventions have increased deer hunters’ mobility as much as the all-terrain vehicle. Honda introduced the first ATV — the three-wheeled, 7-horsepower US 90 — in 1970. In 1982, Suzuki introduced the first four-wheeled design, later adopted by all manufacturers for safety reasons.

Bob Gore revolutionized the outdoor clothing industry with his invention of the first breathable, waterproof and windproof fabric, Gore-Tex, in 1972. When his company received the first commercial order for Gore-Tex in 1976, it wasn’t long until hunting coats and other Gore-Tex products hit the stores. Shortly thereafter, many deer hunters hung up their old canvas hunting coats forever.

Virginia deer hunter Jim Crumley was unhappy with traditional military camouflage, so he started dabbing splotches of brown dye on gray work clothes to match his surroundings. After two years of increased hunting success, he meticulously applied a bark pattern with magic marker. Soon, other hunters were pestering him for the new outfits. Crumley’s original printed Trebark was created in 1980, and modern camouflage was born.

In 1982, Brad Harris, now of Neosho, Missouri, began working full time developing products for Lohman Game Calls. Harris was best known for the turkey-hunting products he pioneered, but he was also an avid deer hunter who noticed deer had their own language. He began mimicking the deer’s grunt with his voice.

This experience led Harris to develop the first grunt call, which was introduced at the Atlanta SHOT Show in 1984. The call was an immediate hit with hunters. Unfortunately for Lohman and Harris, the call was never patented or trademarked. It wasn’t long before look-alikes appeared in stores, riding the wave of success Lohman had created. And the rest, as they say, is history.

Dental-product engineer Dean Reidt began tinkering with the idea of recording deer movements in 1985 and soon launched a new industry. The idea started when Reidt, a bow hunter, was waiting along a deer trail wondering what deer hunters have wondered for generations: How many deer use this trail when I’m not here? To find out, Reidt placed a digital clock inside a box that could be attached to a tree. He added a string to place across the deer trail and tied the string to a switch closer connected to the clock.

“What I did was turn a digital clock into a stop watch,” Reidt said later. “When a deer hit the string, the clock would stop. So then I knew what time the deer came through and from which direction.”

Reidt called his invention the Trail Timer, and today he is recognized as a pioneer in what has become a growing trail-camera business.