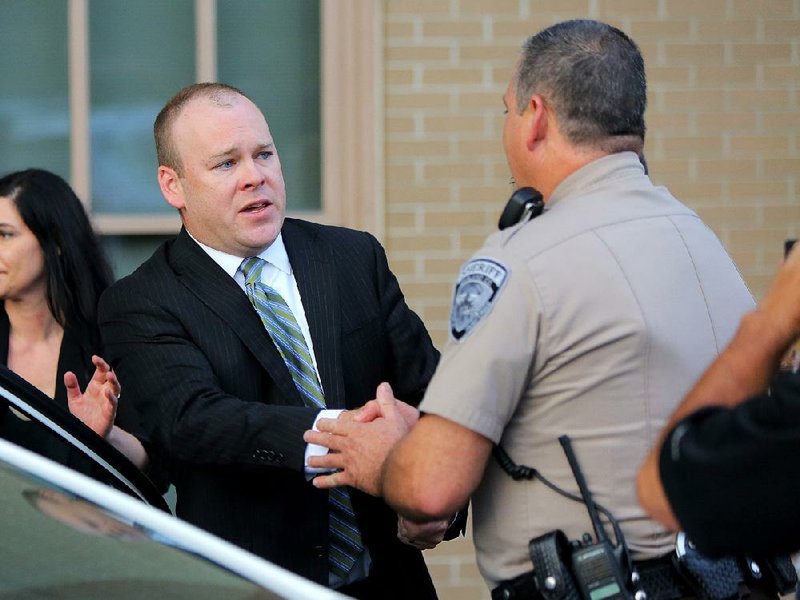 Judge Wade Naramore (left) thanks a deputy as he leaves the Garland County Courthouse in Hot Springs after Naramore was found innocent in August in the hot-car death of his son.

HOT SPRINGS -- Suspended Garland County Circuit Judge Wade Naramore continues to receive his $160,000 salary, and the state has spent $68,961 on special judges to serve in his stead since the July 24, 2015, death of his 18-month-old son, according to the state auditor's office.

Naramore -- who presided over Division 2, the countywide juvenile court -- was suspended with pay by the Arkansas Supreme Court on Feb. 18, 2016, after his arrest in the death of his son, Thomas.

The boy died of hyperthermia after Naramore left him in a hot car. A jury acquitted Naramore of negligent homicide, a Class A misdemeanor, after a five-day trial last August.

The Arkansas Judicial Discipline and Disability Commission and Naramore's attorneys filed a joint petition for temporary suspension last February that was granted by the state Supreme Court under Rule 10 of the Judicial Discipline and Disability Commission's rules of procedure. It keeps a suspension in place pending the outcome of a disciplinary determination. When a judge is charged with a crime, the commission has only two options: suspend him with pay, or allow him to continue serving.

Commission Executive Director David Sachar said Thursday that he is prohibited by law from commenting on specific cases before the committee's investigative panel, which could dismiss the petition against Naramore, reach an agreement with him, or refer the case to the full commission panel for a formal hearing.

It's unknown when the three-person panel comprised of a judge, an attorney and a lay person will make a determination. The panel meets monthly to discuss active cases assigned to it.

"They do not defer on making final decisions without a reason," Sachar said in an email. "Delay is not favored, and they generally dispose of cases deliberately but still quickly. Any case that is being investigated by a panel may take time as the panel is obtaining more information or waiting on something outside its control (statements, transcripts, records, reports from medical providers, police departments, other organizations or agencies, etc.)."

A referral to the full panel of three judges, three lawyers and three lay people could result in a dismissal of the discipline charge, a prescription for corrective action, or formal discipline. The latter would result in a recommendation to the state Supreme Court that Naramore be removed from office or suspended with or without pay.

The governor would appoint a replacement should Naramore be removed. If the removal occurs four months or more before next year's nonpartisan judicial elections, a judge could be elected to serve the remainder of the six-year term Naramore was first elected to in 2014. Per state law, a judge becomes vested in the state's judicial retirement system after eight years of service.

As of Wednesday, the auditor's office has released payments for 224 days of Division 2 special judge assignments. According to information provided by the administrative office of the courts, since September 2015 special judges have been assigned to serve 250 days in Division 2. The total includes 11 days of assignments for later this month and next month.

The $68,961 paid by the state auditor's office doesn't include the $2,615 retired Circuit Judge John Langston received for presiding over Naramore's criminal trial after the county's three other circuit judges recused.

Division 2 hears all of the county's juvenile cases and a percentage of its domestic relations and probate cases. Only two of the assignment orders have given special judges continuing jurisdiction. One involved delinquency cases with two juveniles charged with rape, and the other is a pending child custody case.