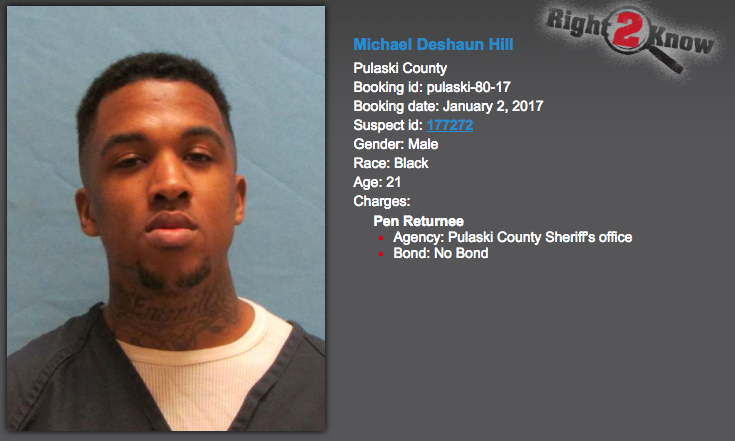 Michael Deshaun Hill will have to serve about 12½ years before he can qualify for parole.

Represented by defense attorneys Bill James and Bobby Digby, Hill also pleaded guilty to felon in possession of a firearm, second-degree unlawful discharge of a firearm from a vehicle and committing a terroristic act for the March 20 holdup, which occurred three days after his 21st birthday.

Hill and an unidentified second man had just stolen Dallas Tompkins' 2005 Mazda 6, his wallet and bag of McDonald's food at gunpoint when police officer Chad Herndon spotted the car at Chenal Parkway and West Markham streets and gave chase.

Herndon pursued the car until it crashed on Labette Manor Drive, where police chased down Hill but the second man escaped.

Hill was on parole from a conviction and sentence for shooting up parked cars in September 2013.

Hill was sentenced to six years in prison in August 2014 on two counts of criminal mischief for those shootings, which occurred while he was on probation for attempted residential burglary.

According to police reports, Hill; his girlfriend, Tamisha Lashay Fudge; and co-defendant Anthony Tee Baker, 21, were at the Eagle Nest apartments on Falcon Court in Little Rock dropping off Baker's girlfriend, Shabryia Stanton.

Stanton had been driving the four of them around in Hill's grandmother's gold Pontiac Grand Am, Hill told police.

While they were at the apartments, Hill said, he fired his gun out the car window at the cars. Police said apartment resident Jessica Bryant's black 2013 Honda Accord was struck five times while her neighbor Gerald Falco's white 2000 Chevrolet Cavalier was hit three times. Police recovered seven .40-caliber shells in the parking lot.

Police were already looking for the Grand Am that night after Lanata Ausler of Conway reported that someone in that vehicle had fired on her 2002 Saturn LS, striking her driver's-side mirror, as she drove on Interstate 430 south near the Colonel Glenn exit.

Hill and Baker were arrested during a traffic stop about 20 minutes after the Eagle Nest shooting, and a loaded, stolen 9mm pistol was found under the driver's seat.

Baker, admitting he had shot at Ausler, subsequently pleaded guilty to two counts of second-degree unlawful discharge of a firearm from a vehicle and accepted a 20-year prison sentence in June 2014.

About three months after the Eagle Nest shooting, in December 2013, Hill; his sister, Pernetra Hill; and Ocoriye Deonte Wallace were arrested on suspicion of aggravated robbery.

They were accused of taking Tracy Brown's cellphone at gunpoint outside the Tech Gods electronic shop on Mara Lynn Road. Brown had identified Michael Hill, a former school classmate, as one of the robbers, according to an arrest report. The charges were later dropped.