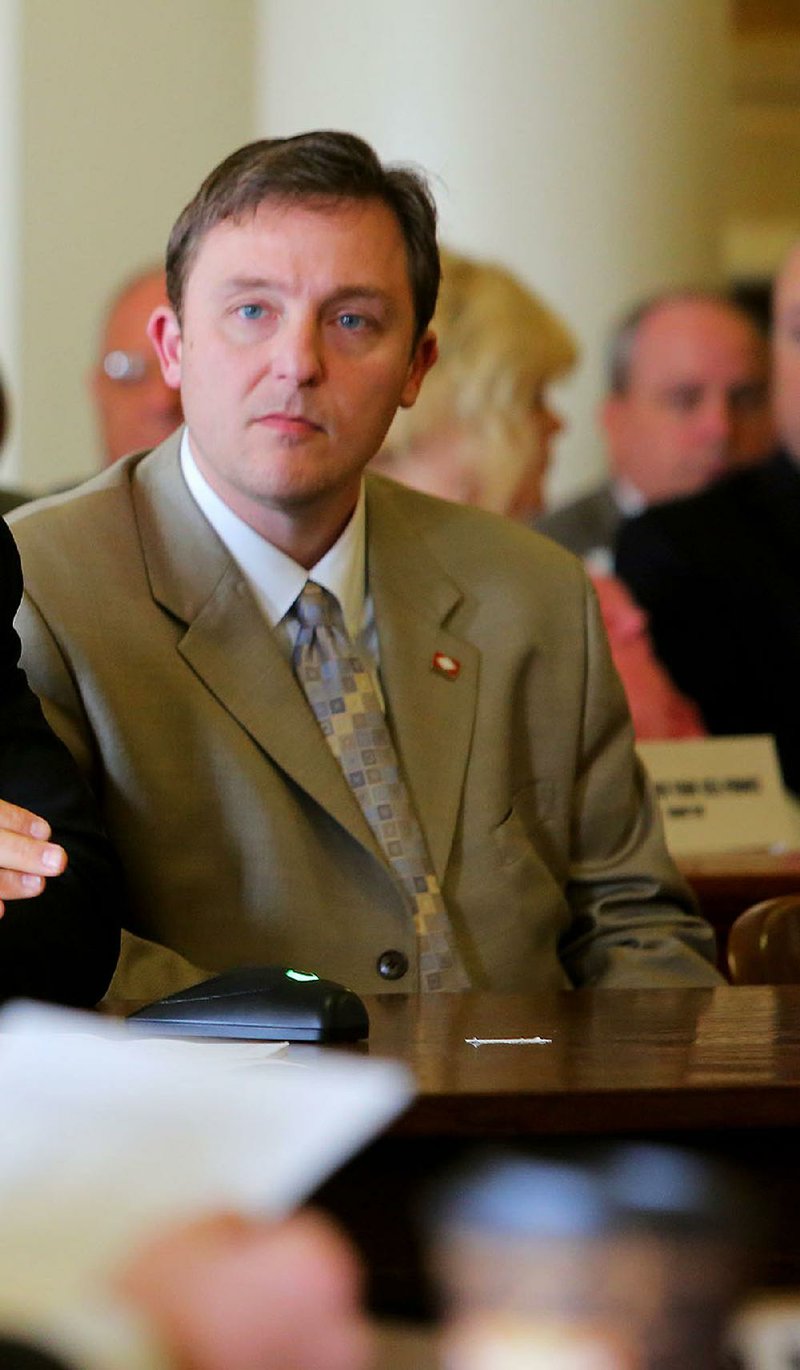 With some of the state's "soft" monthly general revenue reports, House Speaker Jeremy Gillam, R-Judsonia, said Wednesday that state representatives will discuss the idea of "just taking a deep breath and kind of holding up and maybe not" cutting any taxes in the regular session starting Monday.

Under this idea, lawmakers would return during the regular session in 2019 and "kind of see where we are at or maybe even a special session down the line, especially in regards to some of the uncertainty of where we are at with health care coming out of D.C.," Gillam told reporters.

Gov. Asa Hutchinson later told reporters that it's important for lawmakers to enact his "very conservative" $50 million-a-year plan to cut individual income tax rates for Arkansans with taxable income of less than $21,000 a year, in order to continue the momentum to cut income tax rates in the future. He has said his plan would reduce general revenue by $25 million in fiscal 2019 and then $50 million a year thereafter. Fiscal 2019 starts July 1, 2018.

"I don't want to see it put off," he said. "We have our new revenue numbers that have come in, and it gives you a comfort level in terms of being [able to] absorb $50 million in tax cuts and the growth of our budgets and meeting the other needs of our state."

The 2015 Legislature enacted Hutchinson's plan to reduce individual income tax rates for taxable incomes between $21,000 and $75,000 a year. That cut is projected to reduce general revenue by nearly $101 million in the current fiscal year, 2017, which began July 1.

During the first six months of fiscal 2017, total general revenue collections have increased by $30.9 million, or 1 percent, over the same period last year, to $3.03 billion, but they're below the forecast by $14.7 million, or 0.5 percent.

Tax refunds and some special government expenses, such as court-mandated school desegregation payments, come off the top of total general revenue, leaving a net amount that state agencies are allowed to spend. In December, net revenue increased by $3.2 million, or 0.7 percent, over the same month a year ago to $467.4 million and exceeded the state's forecast by $1.8 million or 0.4 percent.

After tossing out the idea of not cutting taxes in the coming session, Gillam said there's also "a mood and a general will among folks that if there is a path forward and we can do something with income tax reduction or corporate tax reduction from the House side, members have expressed that they would like to pursue those options and see if they are there.

"But if they are not, we are not going to force a bad issue. We'll take a deep breath and come back at another time," Gillam told reporters at the Arkansas Associated Press Managing Editors Association legislative forum at the state Capitol.

He said he's heard representatives mention the concept of not cutting taxes.

"It's in the mix. I am not saying that is the dominant prevailing mood," Gillam said when pressed about the idea. "I'm not in any camp at this point right now."

"I think at this point, the House, the people that I have spoken to members-wise in the last few weeks and even several that have come through the office this morning, we are kind of taking a little bit of a cautionary tone in regard to the revenue reports," Gillam said.

"I think there is going to be several tax plans probably floated around throughout the session ... in both ends of the building," he said. "The governor has presented his idea that he feels like is the best path forward. I know there are House members that will be more than likely in the next couple of weeks presenting alternative plans, and we'll let the process ... work itself out and everybody get a chance to solicit support for their ideas."

Hutchinson said he "would love" to ultimately cut the top income tax rate to 5 percent and that takes a long-term commitment.

"If you delay that commitment and say, 'Now is not the right time,' then it makes it harder down the road," he said. "You are going to continue to have the debate between ... do you allocate [the tax cut to] the lower income or the higher income. I want to allocate this $50 million exclusively to provide relief to the lower income and does it put us in the position to take the slings and arrows down the road because we do need [to] reduce the rate for the higher income [people]. They are job creators."

Hendren, who is Hutchinson's nephew, said there is probably more concern in the House than in the Senate about the proposed cut plan not doing anything to spur economic growth. He said Hutchinson has argued that most of the income tax cut reduction to Arkansans with taxable income below $21,000 will be spent and the state will collect sales taxes on that spending.

A 0.1 percent reduction in the state's top income tax rate of 6.9 percent would reduce state tax revenue about $100 million a year and would be difficult to finance, Hendren said.