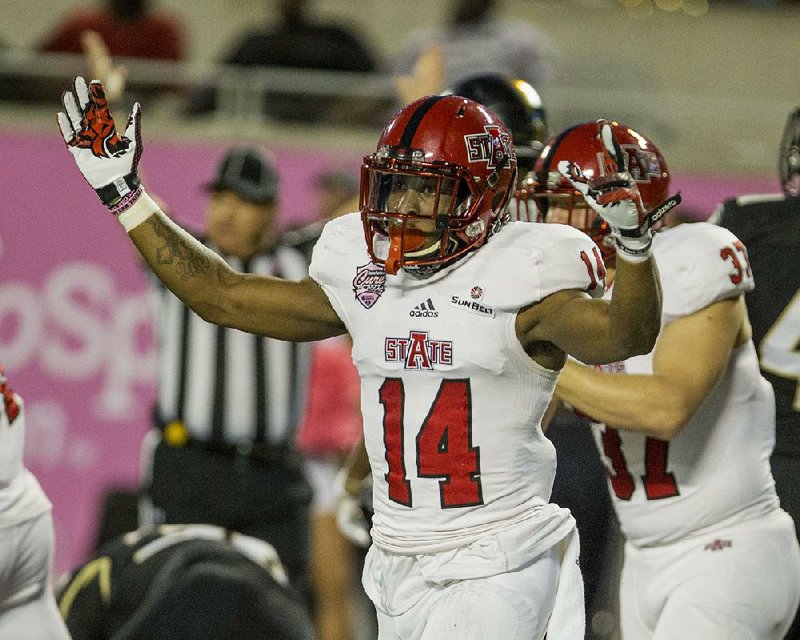 Arkansas State wide receiver Chris Murray and the Red Wolves knocked off Central Florida 31-13 in the Cure Bowl on Dec. 17. In all, Sun Belt Conference teams went 4-2 in bowl games, a mark that topped the league’s 2-2 finish during the 2015 season.

Don't tell those in the Sun Belt Conference that bowl games outside of the College Football Playoff are meaningless. 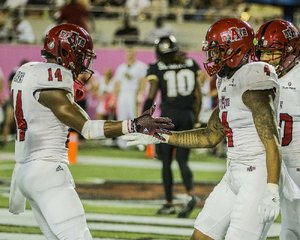 Photo by ROB HERBERT / Special to the Arkansas Democrat Gazette
Arkansas State Red Wolves wide receiver Chris Murray celebrates with teammate Kendall Sanders (4) in the end zone after one of Sanders’ three touchdowns against Central Florida in the Cure Bowl on Dec. 17 at Camping World Stadium in Orlando, Fla. Arkansas State won 31-13 to give the Sun Belt Conference one of its four victories this bowl season.

The six bowls involving Sun Belt teams and their performance this year potentially means about $4.7 million for the league.

The Sun Belt placed six teams in bowls and won four of them, both highs for the league that was formed in 2001. The performance was enough for the league to expect a jump from fourth place to third place in the year-end rankings of Group of Five conferences, which are calculated to determine distribution of a portion of revenue coming from the College Football Playoff.

"A lot of people, including people in the media, have said bowls mean nothing, they're meaningless. That's just not true," ASU Athletic Director Terry Mohajir said. "Now with the CFP financial incentives, your bowl success could have a significant impact on your financial year-end distribution."

Since the CFP was implemented in 2014, the Group of Five conferences -- the American Athletic, Conference USA, Mid-American, the Mountain West and the Sun Belt -- get $85 million annually, providing what Sun Belt Commissioner Karl Benson called the league's largest source of revenue.

Each of the five conferences receives a base of $10 million; the remaining $35 million is divided based on performance. The six computers previously used to compile the BCS rankings are used to make the conference rankings.

Specific formulas for the payout aren't made public, but according to two sources, that money is split into 15 equal shares, with the league that finishes first receiving five shares, second receiving four and so on. If the Sun Belt finishes third, like it expects, three shares would be worth $7 million. The last two years, the Sun Belt finished fifth, which earned it $2.3 million.

The American is expected to finish first, followed by the Mountain West. The MAC was third in the rankings before losing all six of its bowl games, while the Sun Belt was 4-2 -- a performance that expects to provide the jump and $4.7 million more than it earned from CFP distribution the past two years. The league then splits that equally among its 11 football members, meaning ASU and its brethren are set to receive about $636,000.

"It's not life-changing money," Mohajir said. "But it definitely does things that we desire in order to make our program stronger."

Benson called the expected third-place finish "a very notable achievement" and said the bowl performance, along with a record 12 games being aired on one of ESPN's networks, made it so "Sun Belt football has a solid A for 2016."

After revenue from this year's CFP is distributed, the Sun Belt will have spread about $41 million to its football-playing members since the playoff began. Mohajir said ASU has used that money to make improvements in athletic training, strength and conditioning, and nutrition.

"Every $50,000 is an opportunity to invest your services to your students," Mohajir said. "That's how we look at it."

In addition to a boost in revenue, Mohajir thinks it's a boost to the Sun Belt's perception. Thought by some as the weakest of the FBS' 10 conferences, Mohajir hopes beating teams from the AAC, the Mountain West and the MAC in the bowl season changes that.

"I think it's very important, but it's something that I already knew," he said. "I had belief all along that the Sun Belt -- unless you're in a [Power Five] conference, we're at the right place at the right time."