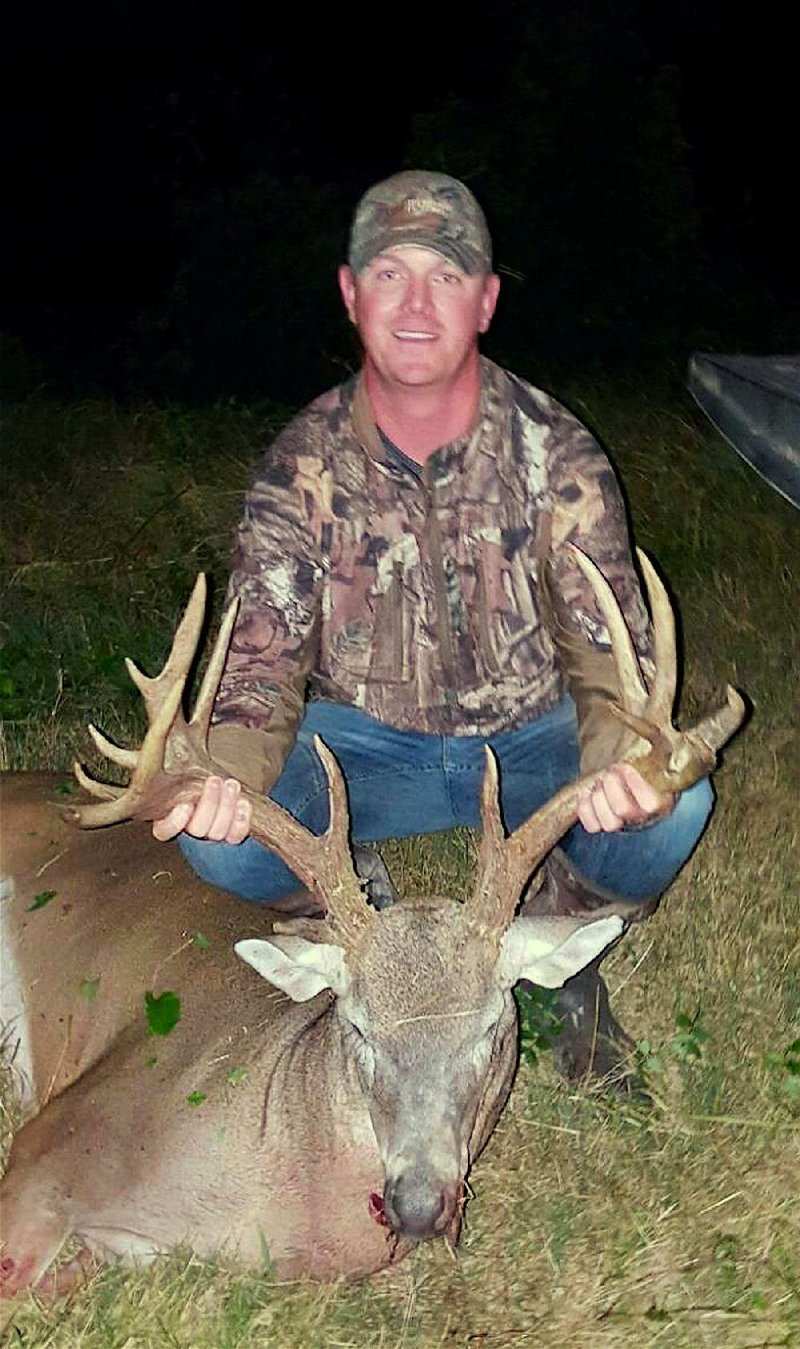 Eric Boen killed this elderly, nontypical buck Sept. 30 near Stuttgart with a crossbow while hunting with his 4 year-old son, Harrison.

Hunters killed bigger bucks in Arkansas this year than the one Eric Boen got in September, but none made a better story.

Make no mistake, Boen's buck was a giant. Its 16-point, non-typical rack had an inside spread of 171/2 inches and an outside spread of 251/2 inches. Its gross score before deductions was 1873/8 Boone and Crockett, and its net score was 1845/8. That's 103/8 short of the minimum 195 non-typical score required to make B&C's all-time awards book, but it probably would have soared past that mark 3-4 years ago.

Boen estimated his buck was 10 years old. It had no teeth, and its antler growth was long into its natural decline.

"My friends joke with me and say the only reason I killed it was because it was deaf and blind," Boen said.

Boen, 35, a real estate broker from Fayetteville, killed the buck with a crossbow near Stuttgart on Lane Oliver's farm, where he and friends have hunted for years. Nobody was familiar with the buck. Nobody had ever seen it. Remote cameras on the property had never photographed it.

A neighboring landowner suspects it to be the buck in a photo taken at night years ago on an adjacent property.

Had a hunter encountered the buck in its prime, it had the potential to have been the largest non-typical to be killed in Arkansas, but this buck was too wily for that.

"We all think it lived most of its life nocturnal," Boen said. "We don't think it had ever seen a hunter until the day I killed it, and it walked right up to me."

Boen said he's not much of a deer hunter. He only killed one other buck previously. Ducks and smallmouth bass are his passions, but Boen said he and his friends emphasized deer this year because the quality of the bucks in their area is so good.

Boen and friend Jacob Rogers visited the property Sept. 6 to do some preparatory work, and Boen told his 4-year-old son Harrison that he would be his hunting buddy for the year.

"He was real excited," Boen said. "He told everybody that he's going deer hunting."

The Boens arrived at their duck lodge Sept. 30 around 3 p.m. Antsy after the long ride from Fayetteville, Harrison busied himself "ramping" toy cars off a board. The elder Boen said he had a devil of a time coaxing him to put on a safety harness for the climb into the box stand they planned to hunt.

"The landowner said, 'Man, you're not going to be out there long.' "

Buoyed by a bag of apples and peanut butter sandwiches, the Boens reached their stand at 5:50 p.m. Harrison finally agreed to wear the harness, and he clambered into the box.

Once settled, Boen gave Harrison earphones so he could watch YouTube Kids on a smartphone. The elder Boen was unusually rapt.

"That was the first time in my life I didn't look at a cellphone while deer hunting," Boen said. "I was just having a good time with Harrison."

You remember how it was wearing earphones as a child. You can't hear, so you yell when you talk.

Boen shushed him, and then Harrison got hungry. He ate his sandwich and apples at 7 p.m., and then stuffed his trash in the bag. He took the ThermaCell from between his legs and put it in his lap.

At 7:05 p.m., Boen glanced to his right and spied a deer walking due east of their stand. It stopped and thrashed a tree with its antlers.

Boen was on the verge of hyperventilating as he retold the story.

"I pulled the earphones out of Harrison's ear and I said, 'Son, if you ever listen to your dad, please listen to me now.' "

"He looked back at me, and he didn't say a word," Boen said.

After the deer finished abusing the tree, it continued toward Boen's stand before stopping behind a larger tree.

"It's a big buck, and I'm freaking out," Boen said. "I'm telling Harrison to hold it together, but I'm the one who's losing it."

The deer stepped clear of the tree at 20 yards. It was well within range, but Boen waited for it to come closer.

At 10 yards, Boen raised his crossbow, but he shook so badly that he struggled to keep it steady.

"I said a little prayer and said, 'Lord, if you're ever going to give me the strength to do something, please let me have this deer.'"

Boen squeezed the trigger and watched the arrow pierce the buck's throat. It staggered into the woods and fell with a crash.

"He said, 'I can't understand a word you're saying, call me back later,' " Boen recalled.

"I called him back nine minutes later. Harrison was crying, so I carried him to a levy beside the field and tried to calm him down. I put him in the landowner's truck and let him continue watching PAW Patrol."

Boen and Earlywine found the buck nearby thanks to a thick blood trail. Boen succumbed to an intense emotional release.

"I picked Jerry up," Boen said. "He told me to put him down because I was going to hurt him. I had so much adrenaline going through me. I picked that deer up off the ground. Jerry told me to stop, and that we'd drag it out with a chain."

It was a buck of a lifetime, but Boen said the best thing was getting to share that moment with Harrison.

"I hate to say that the best day of my life wasn't with my wife," Boen said. "It wasn't my wedding day, but a day deer hunting with my son."