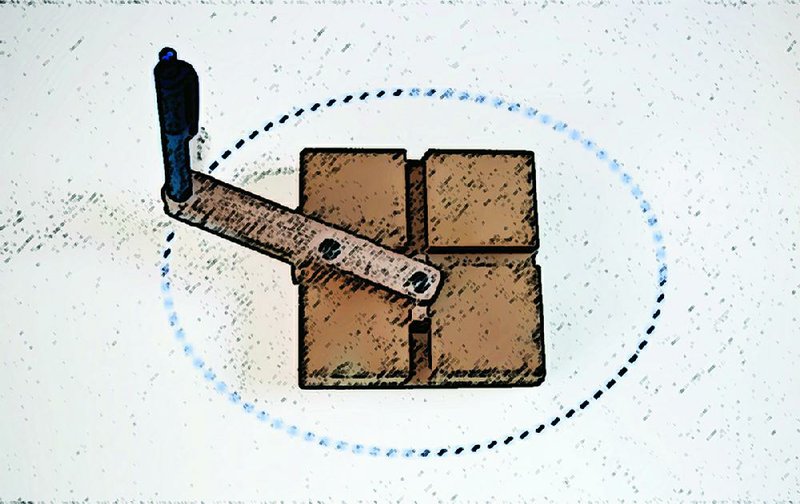 The “do-nothing” is a toy version of a drafting tool designed to draw ellipses.

Tourists look at a do-nothing and think, "Why not?" Then they buy it as a souvenir of wonderful Arkansas. But they should ask, "Why"?

Slaying the 'math monster'Math is child's play with 5 apps, but fun for adults, too

Because there's a reason why.

"I was at a party with a history professor and he had one of these," Sam Lawhorn says, holding the toy in question -- a wooden square fitted with a handle attached to two sliders on perpendicular, intersecting grooves. "Hillbilly Entertainment Center" is stamped in a corner.

As he turns the handle, the sliders move back and forth in their grooves without colliding. Meanwhile, the end of the handle travels around the block, on the same path every time.

"I picked it up and I said, 'Whose Archimedean trammel is this?'"

Lawhorn sets the toy on a glossy table in the mathematics department at the University of Arkansas at Little Rock, where he recently earned a bachelor's degree in math. He taps the end of the crank and explains that the path is a true ellipse.

"That's what this was originally designed for in 250 B.C. by Archimedes of Syracuse," Lawhorn says.

The Greek mathematician is best known for (supposedly) leaping naked from the bath and running down the street while shouting, "Eureka!" Because he'd thought of a useful application for water displacement.

He's also credited with a pile of inventions, from an efficient pump (the Archimedean screw) to the compound pulley and the odometer; to possibly apocryphal marine weapons, including a big iron hand on a long pole. He definitely made discoveries about circles (including a numerical value for pi) and used the advanced math now called calculus.

With a handful of assistants and the fruits of his mind, he kept the Roman army and navy out of Syracuse for years. Lawhorn marvels: "This was Gen. Marcus Claudius Marcellus, who was known to be a great Roman general, and he's dealing with this annoying mathematician."

Eventually the Romans overran the Sicilian city and a soldier stabbed elderly Archimedes to death. In one story, the genius is so absorbed in working a problem he refuses to leave it and go with the soldier to Marcellus; in another the soldier mistakes his pointy drafting tools for weapons.

The ellipse, or stretched circle, is useful in architecture, engineering and in calculating the trajectories of projectiles, and it is not easy to draw freehand. Being able to draw true ellipses is also useful for drawing in perspective and calculating the orbits of planets.