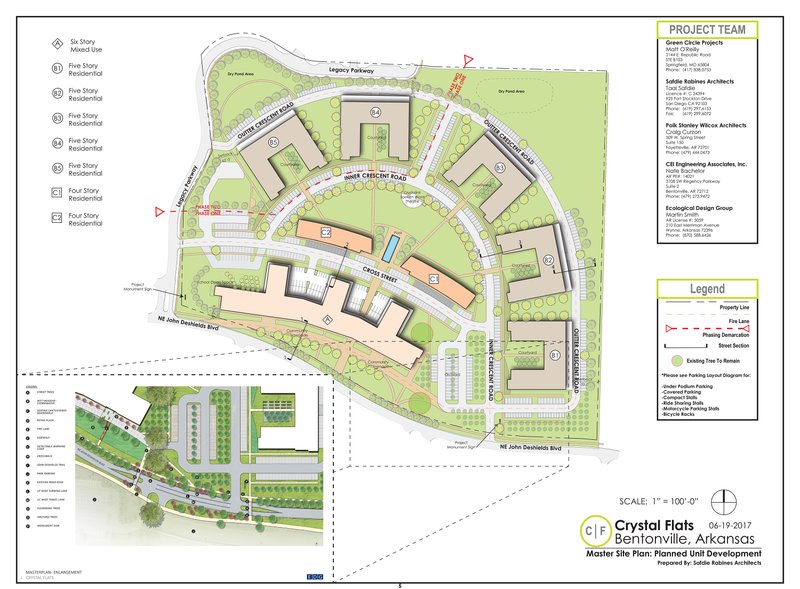 BENTONVILLE -- Crystal Flats mixed-use development is a great idea but not for its proposed location just east of downtown, residents told the Planning Commission on Tuesday.

Nearby residents of the proposed site on 28 acres along Northeast John DeShields Boulevard showed up in droves at the meeting to protest the project that includes 650 residential units along with business, office and green space.

• Rezoning at Southwest I and Southwest 14th streets from agricultural to general commercial.

• Rezoning at Been Road and Southwest Elington Street from agricultural to single family residential.

• Preliminary plat for Oak Meadow Subdivision at Been Road and Southwest Elington Street.

At least 100 people filled the meeting room and lobby at the Community Development Building. About another 50 stood outside the building's doors for most of the meeting.

Common concerns were the building heights and how the development would exacerbate traffic congestion in the area, which would also decrease the safety for children at Memorial Park and Orchards Park -- east and south of the site, respectively.

"The design and idea are fantastic, but the location is all wrong," said Kristi Bolstad, a resident of the near-by Glenbrook Subdivision.

Residents stood shoulder-to-shoulder along the walls of the meeting room. Some sat as the hearing neared its third hour.

Commissioners tabled the request for a planned unit development for the project site. Commissioner Richard Binns was absent.

Twenty percent of the 650 residential spaces will be dedicated to work force housing, the project description states. Housing options will range from 525-square-foot studios to 1,350-square-foot, three-bedroom units and townhouses.

"Crystal Flats is basically a solution to the housing problem in Bentonville," Matt O'Reilly, with Green Circle Projects, told commissioners.

Part of the reasons the buildings are so tall is the parking is underneath them, which allows the development to provide more green space, he added.

The project's 41 percent, or 10.6 acres, of dedicated green space will more than double the city's 20 percent requirement.

It will include an plaza in front and house several services, such as a cafe, fitness center and childcare facility, which will help create less traffic trips through the area through out the day as people can walk and bike to services, said Craig Curzon, with Polk Stanley Wilcox Architects.

"To me, it just looks like a facade, hiding what's behind it," said Jason Crumpton, resident of Allen Croft subdivision, more than a mile northwest of the project site.

The site is also also a 4-minute bike ride or 10-minute walk to downtown, O'Reilly said.

Residents told the project's representatives there won't be as many people walking and biking to commute to places as they think. Several commented the region's weather is too temperamental for people to commute in ways other than driving.

Sam Slaton, resident on Southwest 11th Street southwest of the project site, said it's tricky to find housing that's affordable near downtown, but he and his family needed to as they have one car.

He said he commutes on his bike "pretty much every day" and developments such as this could encourage people to walk and bike for transportation more.

The development's residential buildings include five 60-foot-tall, five-story U-shaped buildings that arch in a semi-circle from the property's southeast corner to the northwest corner as well as two long, four-story rectangular townhome buildings that are in the middle of the project.

A lap pool will sit in between the two townhouse buildings. North of that but south of the other residential buildings will be an outdoor spoken word theater, play areas and open green space. Productive edible landscape will be used throughout the development, according to documents.

Each residential building will have green courtyard with raised planting beds, access to pollinator meadows and use of a food waste composting facility.

"The proposed multi-family housing and complimentary commercial uses will help the community achieve several objectives, providing a greater variety of housing options, increasing the amount of people living close to their work place, enhancing access to downtown and providing a variety of transportation options," the planner's staff report reads.

A traffic study was done in coordination with the Helen Walton Children's Enrichment Center, which will be building a new facility nearby on Northeast J Street. The study recommends a round-a-bout be at the intersection of Northeast John DeShields Boulevard and Northeast J Street.

Several residents said that was a bad idea as drivers in Northwest Arkansas don't navigate them well.