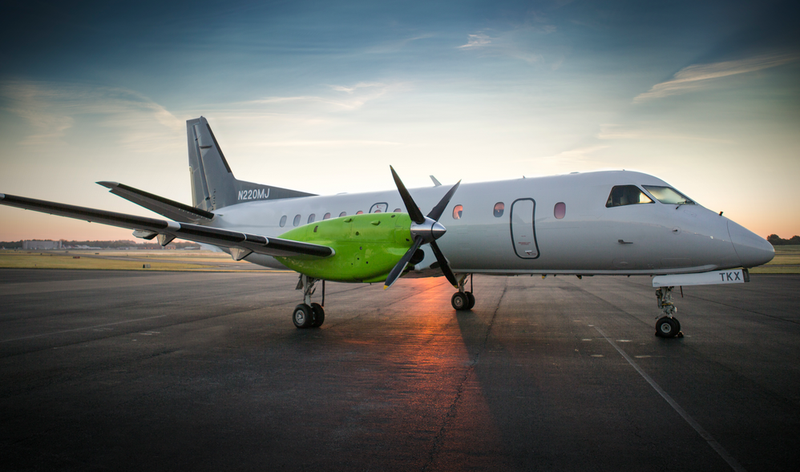 This photograph courtesy of GLO Airlines shows the type of plane that used to make daily, nonstop flights between Little Rock and New Orleans.

Officials at Bill and Hillary Clinton National Airport/Adams Field want GLO Airlines to succeed, but at the same time they look askance at the nearly $100,000 in unpaid bills the startup New Orleans-based airline has left at the airport.

The concern comes as the airline indefinitely suspends service today at Clinton National and several Gulf Coast airports while it says it will try to find another company to provide crew and maintenance services for the fleet of three Saab twin-engine commuter aircraft the airline leases.

Clinton National took precautions when GLO began service in 2015, primarily requiring GLO to pay a deposit equal to two or three months of operation, which at the time airport officials estimated at $44,000.

If the airline resumes service, Clinton National will require it to pay down those bills first and replace the deposit, said Ron Mathieu, the airport's executive director.

"For now, we continue to work with them and to encourage them to do all they can because they had a successful operation here," he said. "But at the same time, we tell them, 'Oh, by the way, there is this money there that belongs to us and can you make a deposit today.' This is the business end of it. This is how we keep our lights on."

He and other airport officials say they will have little recourse in collecting about $38,000 of the balance GLO owes because it was outstanding before the airline filed for bankruptcy in April. Past experience shows that the airport may collect no more than 15 percent of that amount.

GLO filed for bankruptcy protection amid a contractual dispute between the airline and a Tennessee company, Corporate Flight Management, which provides pilots and other services to the airline. An emergency hearing allowed the airline to continue flying.

But problems have continued with "an excessive number" of flight cancellations because of staffing and maintenance problems, GLO said in a statement issued Tuesday.

Corporate Flight Management, for its part, said it has followed the emergency court order in operating GLO's flights, and the airline had no one to blame but itself for its financial woes, "the result of an unproven business plan in an unforgiving industry."

Clinton National and other small airports have been banking on the success of startups like GLO and Allegiant Air, which try to serve markets the bigger commercial carriers ignore.

To save money, their flights typically are on smaller aircraft like the propeller-driven planes GLO flies or, in the case of both airlines, offered only on a seasonal basis at times when they are the most popular.

Though GLO and Allegiant are a small slice of the overall passenger pie at Clinton National, they have helped propel its passenger traffic higher, appearing to halt a yearslong decline.

GLO carried a total of 7,968 passengers through June 30, but compared with the same period last year, it represented a 25.5 percent increase, according to airport figures.

"I have to say we hope they figure out some way to recover, that they are able to fly," said Jim Dailey, the airport commission chairman. "They fill a niche that we all hope is going to continue and expand. I am really saddened more than anything that we're having to face this situation."

GLO and other airlines typically are assessed landing fees based on weight every time one of their aircraft lands at an airport. They also are charged rental fees for any space they use in an airport terminal, whether it is space at the ticket counter, a gate or an office or storage space.

Airports use the money to pay for safety, security or capacity improvements. They also can steer the money toward noise-reduction programs or toward increasing air carrier competition.

Almost every passenger flying out of the Little Rock airport pays the $4.50 facility charge, which is set by Congress. Airlines collect the fees and can keep 11 cents for administrative costs but must remit the balance to the airport.

Airlines come and go. Vision Airlines, an airline with a similar operating model as GLO, began service at Clinton National and other airports in the southeast United States in 2011, offering seasonal service to Destin in the summer and to Orlando in the winter.

That same year, Mathieu terminated the airline's permit to operate at Clinton National after it tallied $53,565.08 in past-due fees, past-due passenger facility charges and a security deposit replacement.