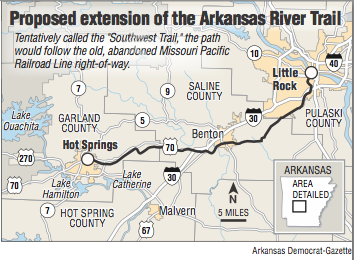 There was standing room only on Thursday evening as the Pulaski County Quorum Court voted to reverse a decision made last month over a 65-mile hike and bike trail that would run between Little Rock and Hot Springs.

The recently installed bike racks outside the county administration building were chock-full of the bicycles many residents rode on their way to ensure the Quorum Court took the first step toward the project.

In a 10-3 vote, the justices of the peace approved a measure to accept a federal grant to fund 80 percent, or $2.7 million, for the project's first phase.

Last month, the absence of several Democratic members of the county's legislative board allowed the board's Republican bloc to block the measure. One condition of the grant requires a 20 percent match, $520,000, split between the local governments involved, Pulaski, Saline and Garland counties.

The combined local dollars and grant dollars would pay for a preliminary engineering and environmental-impact study, as well as determine the trail's route between Little Rock's Central High School and Hot Springs National Park. Next year Pulaski County, which is leading the three counties in the project, would apply for another federal grant.

Republican member Phil Stowers set the premise of the objections to the measure last month, saying that the county should have other infrastructural priorities. On Thursday, members Aaron Robinson and Luke McCoy, both Republicans, made a similar case when explaining the rationale behind their opposition.

There's no certainty the county would continue to receive federal grants as the project progresses through its three phases, Robinson said, and no plan for how the county would pay for maintenance and security along the trail in the future. McCoy felt that the county should secure funding for the project on the front end.

County Judge Barry Hyde, who has been a driving proponent of the project after the retirement of former County Judge Buddy Villines -- who had been crafting the project since 2013 -- was quick to counter that argument.

"I would love nothing [more than] for this bike trail to be a huge success and to eat every word I've said against this trail," McCoy said.

Thursday, the Republican members were the minority. Absent on their side was Stowers, who was away on business, and Paul Elliott, who was attending his mother's funeral.

The measure passed, with McCoy, Robinson and Republican Doug Reed voting against, as they had done last month.

More than a dozen members of the public had signed up to speak in favor of the measure, and only Mark Johnson -- who serves as the chairman of the Pulaski County Republican Committee -- spoke against it.

Johnson called the spending "subsidized recreation" for "someone who spends $5,000 or even $10,000 or more on a bicycle."

"Pulaski County needs more jail beds so we can lock up more of the bad guys who are perpetuating crimes in our community against our citizens. It needs better roads and bridges, and not just prettier ones," he said.

Speakers in favor of the item included Joe Jacobs, chairman of the Governor's Advisory Council on Cycling, and Mason Ellis, who was representing the Bicycle Advocacy of Central Arkansas and the Central Arkansas Trail Alliance.

Earlier this week, Mason told the Arkansas Democrat-Gazette that he had planned to "pack the house to show support" for the trail.

When he spoke before the board on Wednesday he stressed the importance of getting a project "shovel ready" before it can attract future grants and possible private dollars. The Walton Family Foundation, for instance, had contributed $15 million toward completing Northwest Arkansas' Razorback Greenway in 2009.

"We can stand here and talk about a trail all day but we're not likely to get grant funds unless we can show them an alignment, the engineering drawings, the planning and say, 'We're going to use your money on this project and it's going to create those jobs and have that economic impact on the area,'" Ellis said. "That's what it's going to take to get that future funding."

The quorum courts of Garland and Saline counties must also pass similar resolutions to contribute their share of the 20 percent match.

Rick Davis, the county judge for Garland County, plans to put the resolution before his Quorum Court in early August. Saline County Quorum Court Administrator Rhonda Richards also expects the resolution to go before that body in a similar time frame.

"Pulaski County needs to be doing everything in its power to create a vision and atmosphere where people and business want to live," said Justice of the Peace Tyler Denton, a Democrat. "In this day and age, we cannot afford to miss out on opportunities that can dramatically impact the quality of life for our citizens."