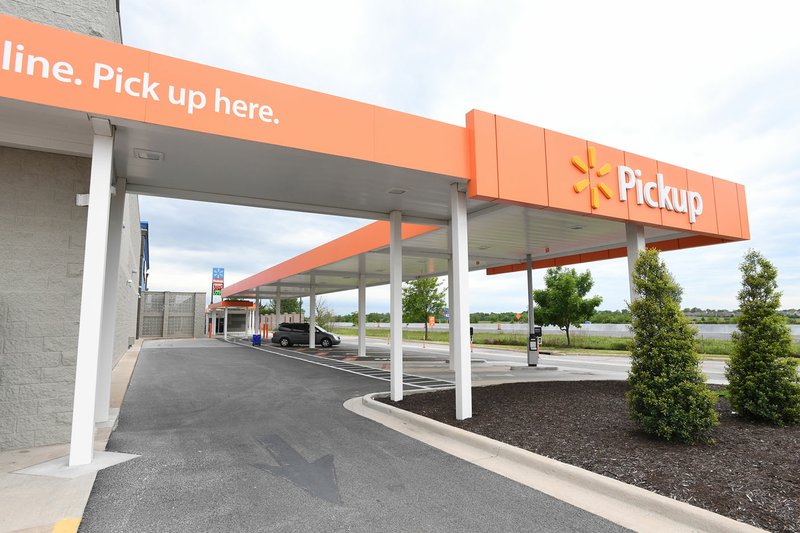 NWA Democrat-Gazette/J.T. WAMPLER Customers park under an awning to pick up groceries May 3 at Wal-Mart on Pleasant Grove in Rogers.

Stephany Ponce scans the cooler holding eggs, picks up a carton and checks for cracks. Finding none, she gently places the carton in her basket and moves on to the next item on her list. 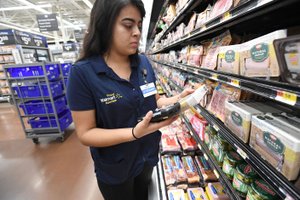 NWA Democrat-Gazette/J.T. WAMPLER Stephany Ponce of Springdale selects grocery items May 3 at Wal-Mart on Pleasant Grove in Rogers. Ponce is a personal shopper at the store, filling orders for pick-up.

Ponce fills several grocery lists daily not for herself, but in her role as a personal shopper at Wal-Mart.

"I check expiration dates and look for damaged packages," she said recently at the store on Pleasant Crossing Boulevard in Rogers. "We make sure we are giving customers the best product."

Customers can shop online and pick up their order curbside in more than 100 markets and 600 stores nationwide. Martinez said the company is looking at adding 500 more stores to the program this year.

Grocery pickup is not new for Wal-Mart. The company's first online ordering test started in 2011 in San Jose, Calif., before expanding to Denver in 2013.

A 15,000-square-foot prototype opened at the intersection of Walton Boulevard and J Street in Bentonville in 2014. The site's only function is grocery pickup and is still in operation.

Martinez, who once managed the Bentonville pickup store, said the standalone site continues to offer a unique perspective, but adding pickup locations at stores is a way to merge Wal-Mart's physical operations with the digital side of the business.

A study by iVend Retail, an omnichannel retail management software vendor, reports 57.5 percent of all shoppers use an omnichannel service, but only 31.6 percent describe it as being a smooth process. Omnichannel is when a shopper uses multiple methods of shopping, such as buying online or via the telephone and picking up in the store.

"We have several tests going on," Martinez said. "We want to meet customer demand in every area."

The iVend survey said 29.2 percent of customers said convenience was the biggest reason to shop online and pickup in a store.

Convenience is what made Tabatha Miller a loyal Wal-Mart pickup customer. The Fayetteville mother of three children ages 4 and younger started using the service as soon as she moved to Northwest Arkansas from the East Coast in 2015.

"Literally, grocery pickup is one of my favorite things about Northwest Arkansas. My friends at home are so jealous," she said.

The Millers use the service at least twice a week, and some months avoid having to step into a store, she said.

"We can manager our grocery budget more efficiently. We are more intentional about our grocery shopping and spend $100 or less," she said.

Ponce, who spent two years as a cashier before becoming a personal shopper about seven months ago, said the job has helped her be a better shopper.

"Before I worked with online grocery pickup I didn't think much about expiration dates," she said.

"It saves so much time. It's quick and easy," she said. "I tell customers the benefits of pickup, so I thought I needed to try it."

Food Marketing Institute and Nielsen report in the "Digitally Engaged Food Shopper" analysis that 23 percent of American households buy food online. The report predicts that could reach 70 percent in 10 years, with 60 percent of those shoppers spending more than 25 percent of their food dollars online.

"The grocery business truly is at a digital tipping point, where every aspect of the shopper's journey will soon be influenced by digital, and increasingly enabled by digital platforms," Chris Morley, president of U.S. Buy at Nielsen, said in the report.

The report says online grocery shopping could quintuple in the next 10 years, reaching $100 billion by 2025.

Wal-Mart's personal shoppers do three rounds of collecting groceries daily, filling orders for four to eight customers at a time, Ponce said. Items are scanned with a hand-held device to make sure it is the correct product and placed into the order's basket. Items are marked with stickers identifying "fragile," "substitution," "alcohol" and "heavy" as needed.

Jun Rasphuomy, eCommerce assistant store manager at the Rogers store, said alcohol sales are dependent on local laws and always require identification at pickup. Tobacco products are not available to be picked up.

"When you think grocery pickup, most people think of just groceries," he said in an email. "This is not the case. Things such as fishing rods, basketballs, exercise equipment and air/water filters are available for online grocery pickup."

The number of personal shoppers varies by store, but typically range from nine to 30 depending on the day and volume of orders, Rasphuomy said.

Martinez said employees are trained to look for the best products, specially in produce and meat departments.

"It's about building trust with the customer and that takes dedication. I think we meet that goal," she said.

The program improves the store's overall performance, she said, because personal shoppers are looking every day at items across the store.

"If the in-store stock is good, I've seen it go from good to excellent," Martinez said. "And customers see that."

"If there is an issue, we offer a hassle-free refund/replacement for any bad produce or meat products," he said.

"Technology in particular is being used to get rid of friction, make things simpler and easier, and customers just expect that as a company, you're innovating all the time and making things more enjoyable for them," McMillon said.