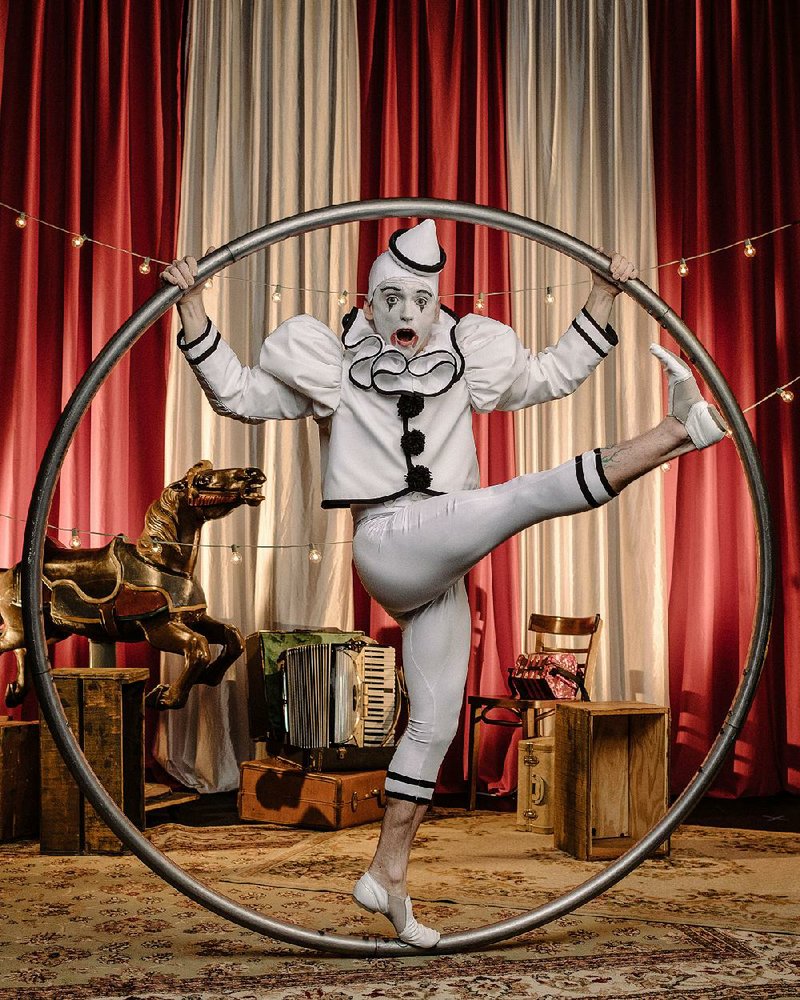 Joshua Dean stars in The Rep’s production of Godspell.

With the recent news that Ringling Bros. and Barnum & Bailey had folded its tents, those who thought the circus was vanishing from the American landscape might be surprised to learn that it's back, at least on a smaller scale and in an unusual format and location.

The Arkansas Repertory Theater is presenting Godspell, a 1970s-era rock musical, and adding a circus atmosphere, where it is being staged as a down-on-its-luck traveling circus in Birmingham, Ala., during the civil rights movement.

Based on the Gospel of St. Matthew, Godspell was written by John Michael Tebelak (book) and Stephen Schwartz (music and lyrics). Its best-known songs are "Day by Day," "On the Willows" and "Beautiful City."

Donna Drake, who directed the Rep's 2015 production of Mary Poppins, is back as director of Godspell, and the 2 Ring Circus members, who were part of last season's holiday production, The Little Mermaid, have also returned and are partnering with the Rep in creating the show.

"The folks from 2 Ring Circus approached me with their idea a little over a year ago," Drake says. "The idea was to put 'Cirque' into Godspell, so we spent the next year sitting around my living room, playing the 'what if?' game. What if we do this? What if we do that? And Schwartz had written at the front of the play, 'Use your imagination ... bring to it what you will.'

"So a story began to evolve, and we reimagined it, setting it in 1968, back in the day when there were still circus tents on the outskirts of towns, in fields. The circus has just had foreclosure, they can't pay their bills and everyone is to go on their own way, letting go of their lifestyle. At the same time, a young evangelical preacher is on the run from the law because certain lawmakers do not like what he is preaching and they want him arrested. The racial tension of the times is part of the story."

Ben Franklin, a founding member of 2 Ring Circus who is portraying the Circus Director/Choreographer and Hula Hooper, says, "Back in '68, the circus was a dying art form. Ringling Bros. had moved indoors to arenas for the first time, and we wanted to depict the desperation of folks who had trained their entire lives to learn their crafts and how that puts you in an interesting mindset when you face the prospect of having no career.

"The show has always been done as sketches and very lighthearted, and we always wondered who are these people? So we took the performers and put them in an environment where Jesus comes in and fills everyone with the desire to find joy and love and keep their community together. So the parables are acted out by clowns, and aerialists will sing the songs in the air, or being thrown around, doing handstands, and I sing a song while doing a hula hoop act."

LaDonna Burns, who is playing Roustabout Woman, says, "My role is the behind-the-scenes woman who takes care of everything, almost like a mama bear. She grew up with the circus family and since it was 1968, and being a black woman, she isn't allowed to do much else than take care of people. She happily hides in the background, not wanting the spotlight."

Amy Jo Jackson, who played Ursula in the Rep's The Little Mermaid and is portraying Fortune Teller, says, "We discussed what life is like for the characters before Jesus comes on the scene. So when Jesus arrives, my character's 'third eye' or sixth sense all gets expanded when he is around. I did some research, had a tarot card reader come to my house and show me a bit of things, but I don't have to actually read someone's mind. So my skills are more singing, and giving deep looks, not like those on a trapeze or something."

Drake says that in addition to its circus trappings, the show retains its inspirational message.

"We're here to love one another, that is the message I want the audience to get," Drake notes. "Because it is the Christ story, we know what's going to happen. My question is, 'It's 2017, have we learned our lesson?'"

At noon today, the Clinton School of Public Service Distinguished Speaker Series will present the Rep's producing artistic director, John Miller-Stephany, and the play's director, Drake, with actors Franklin, Dean, Burns and McMillan. (Due to Riverfest preparations, the panel will be held at Ron Robinson Theater.) To reserve seats, email publicprograms@clintonschool.uasys.edu or call (501) 683-5239.

At 6 p.m. today, the play's second preview performance will include Beer Night, provided by Lost Forty Brewing and Arkansas Times.

At 6:15 p.m. today, the creative team will provide insight before the start of the preview performance.

Friday, the play's official opening night will feature a pre-show Circus Night starting at 6 p.m. There will be food trucks, a fortune teller, photo opportunities with Rudy Roo Roo the Kangaroo, carnival games and more, with "clowning around encouraged," according to a press release.

There will also be a post-show reception with the cast, along with complimentary champagne and light hors d'oeuvres from RSVP Catering.

At 7 p.m. Sunday, "Pay Your Age Night" will permit those between ages 22 and 40 to pay the equivalent of their age for a ticket. There are 100 such tickets available to purchase and only four tickets per household will be sold, with proof of age for each person in a party required when tickets are picked up. There will be a complimentary wine tasting provided by Colonial Wine and Spirits.

The 7 p.m. June 14 performance will be sign-interpreted by Raphael James of the University of Arkansas at Little Rock. Deaf patrons are encouraged to contact the Rep box office to reserve seating.

On June 24, following the evening performance, there will be an after-party, with drinks and appearances by cast members in Foster's.